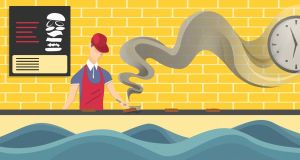 The burgers sizzle – their skin changing colour under impatient heat. Two are mine and the other is the product of sexual intercourse between my girlfriend, Laura, and a man called Dermot. The door opens to admit the sound of the city, a bus pulling up with the wheeze of an asthmatic child and the mute obedience of its passengers. Dermot has run off. Valencia, Laura thinks, but she’s not sure.

The till opens, the metal draw rolling along its tracks. I work five days a week to help feed and clothe my children, at least that is what it seems like. Mary closes the coin-heavy till drawer, pushing it back into the safety of flush metal. They are real children I tuck into bed. I press down on the burger with a spatula, forcing the meat up through its gaps. A plume of smoke rises from the grill and settles somewhere in the metal vents on the ceiling. I get home around seven. I open the front door and the kids come running, throwing their arms around my legs and dragging me into the living room. Laura shouts Hi from the kitchen and I shout Hi back. The meat is cooking.

I don’t know what it smells like any more. Laura tells me there is a meal to put in the microwave. I thank her and she watches us playing with Lego, dragons, action men and miniature animals. And it all doesn’t feel real. A man comes up to Ronan at the counter. Can I use yizzer toilets? They’re for customers only, Ronan says. It’s like we are in an American television show or a computer game. But I can touch it all. It’s all material and real.

I got a fucking burger, the man says. Off who? Yer man. He’s gone now. I’m dying for a piss here. Sorry. Fuck off. We have a kitchen. And there’s the dinner table. There’s the chairs. And here’s the living room. The television. And what else do we need in here? Oh right, yeah, we’ll get a bookcase. And now there’s books in the bookcase. Huge encyclopaedias about all manner of things. I watch the man use the underside of his hand to knock a metal container of straws off the service counter. Straws roll across the floor.

People stop eating and watch on. Joseph, our Nigerian bouncer, rushes over and grabs the man by the hood. The man makes a wild swing for Joseph’s head but is forced to the ground. And there’s our kids running around the house, from room to room, bouncing off things and falling down holes like snooker balls. I take a quick glance at Ronan and we share a giddy look for a split second. Leah, my manager, comes up to me and shakes her head. Terrible, she says. Yeah, terrible, I say. And there’s the kids’ bedroom and the bunk bed from Ikea in pieces on the ground. And there’s Laura, my blond-haired girlfriend. Daughter of an electrician and hairdresser. And there’s me. I’m there too. I sit in the living room after my television dinner and sip on a beer, confused. Spanish tourists chat excitedly about a familiar meal. A fuck and a bollocks from Ronan on ice-creams. The low whirr of the mechanised bin as it churns the rubbish into smelly pulp. I take the children to the playground. It’s a short walk from the house and enclosed by tall metal railings. The sea is close by. A cool wind lashes your face and gently turns the roundabout like it’s being pushed by a ghost. The melodic thud of Janice’s footsteps as she moves from table to table, tray to tray.

Other parents sit down beside me on the benches. We all exhale, groan and smile at them. Sometimes I get up and run around with the kids until I am panting. Other times, I just sit and fantasise about beating up a paedophile. Number 47, Catherine repeats but no one is laying claim to six chicken tenders. I get a bun from the rack and place it in the toaster – the crown goes into the large section of the toaster, the middle and heel into the smaller part. There is a shop across the road from the playground and I hand them the money to give to the shopkeeper for bags of jellies. What do you say? I ask. Thank you, they say. And this makes me feel like a good father for a little while. There is a shout to fill up the ice cream machine and everyone looks at each other.

A woman is howling across the street about the government and people arc their walk around her. The burgers are almost done and I’ve two hours left of my shift. I think of the woman on that reality show. She is in her early 20s dancing in a metallic dress with ends shredded into tethers that climb up and her down her legs as she moves to the beat, revealing, bounce to bounce, that tantalising area where leg meets arse. I long to touch her skin, run my hand along it, up and down, feel the softness with the grain, and the tingle against it. How long on them burgers Damien? Forty seconds. Right, hurry it up. A man folds a broadsheet, wedges it between his arm and side and walks out.

Laura cheated on me in between our first and second child. I was lying on the bed watching the news. She took the remote control off the bedside locker and turned the volume down, said we need to talk. I was irritated that she would tell me in such a cliched way. She got upset that I wasn’t crying and punched me in the chest. I get a box and place the toasted crown on top of it. On top of the crown, I place the middle, before putting the heel into the bottom of the box. A family enter and their noses twitch at an evanescent smell of vinegar. There was a party thrown by someone I didn’t really know. I drank warm beer in the garden and chatted to a girl about how brilliant alcohol was.

A child uses his last few chips to mop up what’s left of the tomato ketchup smeared on the paper box. I take the gun and squirt sauce on the middle and heel of the burger. I didn’t know she was a mother and neither of us wanted that child or the one after but it felt inevitable. I think a part of me wanted to be pitied – for people to see what an unlucky bastard I was. Ronan makes a joke. People laugh and shake their heads. Now the pickles, two of which I place on the middle. And cheese. Don’t forget the cheese! One slice of cheese on the bun. I don’t know what to think. My manager Leah groans as she watches the new guy fumbling with the deep-fat fryer. I pick up metal tongs, take two burgers from the grill then place one on the middle and one on the heel of the bun.

My oldest, Rosie, is full of questions. Why is the moon there? she asked recently. I said it’s there to keep check on the earth. She didn’t seem satisfied with that and looked out the window at the rain splashing off the car roof. Number 54, Catherine calls on the intercom and a man walks forward holding a receipt. Ronan comes over. How many inches do ye reckon Joseph is packing. What? How long ye reckon his dick is? I don’t know. Like a baby’s arm, Ronan says. Probably. I take the middle bun with the toppings and place it on the heel before closing the lid. I go drinking with Ronan most Fridays.

We buy rounds and I let him do most of the talking. He got us into a fight once when he started mouthing off to these students. I just remember my mouth tingling and blood collecting on my tongue. Ronan said it was fucking unbelievable. The burger is ready to feed someone now as I look at the deep-fat fryer and its bubbling oil, a yellowish-brown blur, chuckling away to itself. Rosie loves the idea of a flood, longing for it to rain all day and for our street to turn into a lake filled with fish. Is it going to flood? she asks me excitedly when it starts to rain. It could do, I say.

A teenager lets his mobile ring out as he stares vacantly at a finished meal. I take dehydrated onions and shredded lettuce from a plastic box, remembering similar childhood fantasises of the green in our housing estate flooding with water, so I could swim in it or buy a toy boat to navigate its tributaries. And still I get an impulse for catastrophe, for a flood or some natural disaster to displace everyone from their positions of familiarity and we’d all be there trying to survive. A woman rustles greasy paper into a ball as she digests the last of her chicken burger. Outside, a taxi driver turns on his light for another day’s work. The smell of something. The thought of something. The afternoon extending out to evening.