Bloomsbury is publishing four new editions of the first book, one for each Hogwarts house 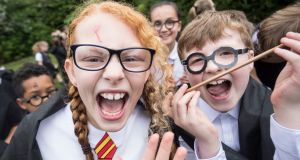 Children dressed as Harry Potter in Bolton, UK on Friday, part of an attempt to break the world record for the largest gathering of people dressed as the wizard. Photograph: Danny Lawson/PA Wire

Harry Potter fans around the world on Monday celebrate the 20th anniversary of the first book about The Boy Who Lived. Harry Potter And The Philosopher’s Stone was first published on June 26th, 1997 and has since sold more than 450 million copies worldwide in 79 languages.

It has also led to a major movie franchise, a sold-out theatre production and multiple theme parks, as well as a booming memorabilia market.

Author JK Rowling had the idea for the stories about a young wizard and his friends and teachers at a school for magic while on a train journey and wrote the first book in a small cafe in Edinburgh. The cafe, the Elephant House, has since become a tourist attraction for fans of the series.

Rowling’s follow-up to The Philosopher’s Stone, The Chamber of Secrets, was published the following year in 1998, while Harry Potter And The Prisoner of Azkaban was published in 1999.

They were followed by Harry Potter And The Goblet Of Fire, The Order Of The Phoenix, The Half-Blood Prince and The Deathly Hallows.

The first film, which propelled stars Daniel Radcliffe, Emma Watson and Rupert Grint to global fame, was released in 2001 and the franchise wrapped up in 2011.

Harry Potter And The Cursed Child, a two-part stage play written by Jack Thorne and based on a story by Rowling, opened on July 30th 2016.

In honour of the 20-year anniversary, an exhibition celebrating the magic of Harry Potter will open at the British Library on October 20th, while Rowling’s publisher Bloomsbury will release four new editions of the book, one for each house at Hogwarts School Of Witchcraft and Wizardry.

The covers feature the crest for each house and inside are fact files, character profiles and illustrations.

The Pottermore, the online home of Harry Potter, recently announced a Wizarding World Book Club, allowing fans to revisit their favourite books and discuss them online.