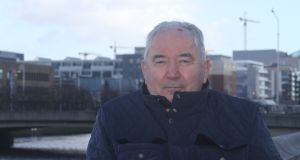 Harry Crosbie: “I found as I was writing that my memory was opening up and I could remember in incredible detail about what happened”

Harry Crosbie is best known as the man who turned the Dublin Docklands into one of the most successful urban renewal projects in Europe. He is also known for his long friendship with the band U2, who set up a studio next to him in the Docklands.

Now, at the age of 75, he has published his first book. Underdose Farm, his book of short stories, has won the highest praise from the author Richard Ford: “It’d be self-congratulating to say that if Crosbie the writer didn’t exist we’d have to invent him. It’d also be hopeless because we couldn’t do it. We couldn’t manufacture a writer who knows all the weird, grainy and hilarious stuff Crosbie knows, and magically combines that with the civilised urge to set it all down for others’ delectation. Mark Twain was that sort of writer. Ring Lardner was. Nelson Algren. It’s heartening to know Crosbie’s is not yet a dying art.”

We asked Crosbie about Undernose Farm.

How did your first book of short stories come about?

I have always been interested in words and writing and I have been a good reader. When I was sitting at home during the Covid-19 lockdown, I was speaking to John Banville and Michael Colgan, who are friends of mine. I said I was going to get lessons in writing to see if I could write. They both said, ‘you don’t need lessons, just do it. That’s how you do it’. I sat down and I wrote one story, 18 and a half, which I enjoyed doing and I then wrote another one.

I went up to Lilliput Press as I had met Antony Farrell at a lunch given by Cathy Gilfillan, a director of Lilliput. I asked would he set the story up as a Christmas card. He said he had read them, that I could write and that I should keep writing. That was about three months before Christmas. He told me to bring the stuff to him as I write it and that is what happened. I don’t like typing. I write everything out in a scribble and then I write it properly and I get it typed by my friend Maeve. I found it relaxed and enjoyable.

I found as I was writing that my memory was opening up and I could remember in incredible detail about what happened. It truly is the case that the past is another country. The entire world I am writing about has been swept away by modernity. I am not at all nostalgic about the past. I think the present day is wonderful in comparison with the past. When I look at the lives lived by my young grandchildren, it fills me with pleasure. Life will be a lot easier for them.

Eventually, when I had enough, Antony Farrell said I should publish a little book because I wanted to give the proceeds to the Peter McVerry Trust. As all the bookshops were closed, we could not have a launch in the normal way or we could not sell in the normal way, so we put it out only on the Lilliput website and it did so well that he has asked me to write more stories and we are going to publish it as a paperback when the bookshops reopen.

Was this book prompted by the pandemic?

Yes, definitely. When I was working on it, it made me realise how hugely different the world is particularly around the docklands where I have lived and worked all my life. The book is told through the eyes of a smart-alec 15-year-old growing up in the Dublin of the early 1960s. It’s partially autobiographical.

When you think that when I started work on the Point Depot in 1985, if you stood on Pearse Street and looked east to the sea, the next person was in Holyhead. Nobody went east of the Customs House. I said that at a party and people were amazed by it. Dublin is a more self-confident city then the one that I grew up in.

It’s a fairer city than the one I grew up in too and the silly class barriers of tuppence ha’penny looking down on tuppence are being swept away. People who work get their reward. The docks were completely deserted after working hours and at the weekend. It still amazes me to see the huge buildings which now surround my house and to hear 100 different languages when I walk up to the shop.

It has exposed the massive economic and social changes that have happened in Ireland in my lifetime and I am greatly pleased that Dublin has managed to preserve its Georgian core and to prove that modern glass and steel buildings can sit happily beside 18th-century houses.

It is great to see that Dublin has become a sophisticated European capital in my life. When I was growing up, I was aware of great poverty and social injustice and I am glad to see that to some extent the world is now a fairer place and everybody can get a shot at success.

There are characters in your book such as the pigeon fancier called Hairoil O’Reilly. Are they based on real characters?

They were based on real characters but most of them are now dead. The world that they lived in has completely been swept away as if it never existed. It was the world of working-class poverty.

An example of the lack of dignity at that time was the daily read for casual dockers which was held outside the Point Depot where the Three Bears are. Large crowds of men stood in the rain looking for work and if there was no work, they went home drenched to the skin.

That also has been swept away and rightly so. My book is an attempt at capturing a world which is now gone and I have learned a huge amount in writing these little stories and I am now going to write a novel and hope to capture the essence of Dublin now rather than then.

There is a lot of the sea about this book. What is your connection to it?

In the age before containers, we worked on ships and we were much more familiar with the crews and they stayed in port a lot longer. The ships then were bigger because they came from deep sea around the world. There was a much greater mix of nationalities than now.

My father, Harry, was a friend of the captain of one of the steam tugs, and in the days before health and safety, I would run a few messages for them and I would get to go to sea and steer the steam tug and those days are the best moments of my life. That’s the basis of the story Tug in the book.

I wanted to give people a word picture of being in Dublin Bay on an early summer’s morning, coming alongside a huge ocean freighter in a beautiful old steam tug. I think I have done that.

How did the endorsement from Richard Ford come about?

Richard Ford is a friend of mine. He spends quite a lot of time in Ireland. When he was teaching in Trinity, I often went for a pint with him and we became friends. He is hoping to come down to our cottage in Wexford in the summer if he is allowed. He asked me to send him the book and he sent back his blurb. I was delighted. John Banville and I are old friends now and I go for lunch with him every second week and have done for many years. I sent them both the books. I never discussed what they should put into it.

You are best known for your role as a developer of the Docklands, but you don’t write about that. Why?

I might now. It is a different story. It the story of that boy and that boy is now a man and maybe that man will write the story of the development of the docks. Will it be fiction or non-fiction? I don’t know yet. I believe the city moving east and to its bay has been a wonderful addition to the culture of Dublin City which I know so much. I was never part of the Celtic Tiger thing because I was doing what I was doing long before the Celtic Tiger.

You have lived a very interesting life and have a great friendship with U2. Have you thought about writing an autobiography?

No. It would finish up as a litany of name-dropping which I find incredibly boring and has been done to death. I work behind the scenes with famous people, some of whom I like and some of whom I don’t like. I never mention U2 or any rock star or famous people that goes with the job. Our dealings with them are private. That is why I cannot write an autobiography. If I write another book it will probably be about bank robbers, not rock stars, and it certainly will not be about me.