Lisa Harding on her new novel, Bright Burning Things, and the nomadic insecurity of renting in your 40s 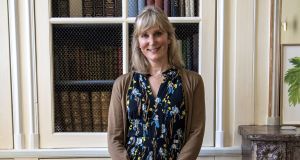 Lisa Harding: ‘Trying to create stability as a creative artist is so hard.’ Photograph: Christophe Archambault/AFP via Getty

When novelist Lisa Harding picks up the call for our interview, I am immediately reminded of her former career once she starts talking. Harding, whose second novel, Bright Burning Things, will be published in March, was previously a television and stage actor. She retains the clear, supple and expressive voice of an actor, even though she’s moved on now, and has a voice of a different kind; an authorial one.

The central character in Bright Burning Things, Sonya, is also a former actor. Addicted to white wine, she is an unpredictable and neglectful mother to her small son, and extremely volatile. The novel careers along from the opening pages, where Sonya is on Sandymount Strand with Tommy, her son, and their underfed dog, Herbie. Sonya strips off and races into the sea, leaving them both behind on the shoreline to fend for themselves, which is pretty much how the narrative continues to play out over the course of the novel.

“Sonya is a composite of so many different characters,” Harding says. “She is so unfiltered and so raw and so angry. She was kind of exhilarating to write, because she is so different from how I am in real life.”

The novel is written in the intense first-person voice of Sonya, who is too drunk, hungover, or too confused most of the time to see the chaos she is creating. Her powerful voice is utterly engaging, and there’s a sensation of vertigo for the reader, as they hurry on through the pages after Sonya, bracing for the next compelling domestic disaster to occur. It’s ultimately a story focused on the many consequences of addiction for a single mother with little external support.

Harding’s first novel, Harvesting, is about sex trafficking. For this second novel, addiction in various forms was the theme she wanted to explore.

“I don’t think there is anyone in this country whose life hasn’t been touched by addiction; it’s everywhere,” as she puts it. “I’m fascinated by the nature of addiction, and how we can latch on to different things at different points in our lives.

“Certainly for me, acting was an addiction. For me it was needing to get high; get that attention hit, and I guess [the character of] Sonya started to come when all of that was gone from my life. There was no excitement on that level, because I wasn’t on stage any more. I remember thinking that creative impulse, when it is blocked or when it is thwarted, can be very powerful.”

The initial draft of the novel was 120,000 words; a third longer than it is now. “I just allowed this voice of rage to come through. I didn’t have any idea of what I was trying to say, or what the novel was about at that point. I didn’t know what story I was trying to tell; I just had this character who wouldn’t leave me alone.”

A year into the pandemic, Harding now wryly compares her fictional character to being like “someone in lockdown. She is so isolated and so alone in her life, and I think a lot of people now feel very isolated and very alone.”

Harding’s own pandemic was punctuated by another unwelcome property move. She has been renting – and has had to move several times – in Dublin since returning from working as an actor in London some years ago. “I am not particularly happy with the landlords in this country. Trying to create stability as a creative artist is so hard. Moving again was hugely destabilising to my home life and it was particularly tough this time. It was something about lack of control out there in the world, and the lack of control around your own life. This constant moving-moving-moving does get wearing as you get older.”

Harding, who grew up in Dublin, initially wanted to be a dancer. At Trinity, she joined Players, and got an agent. She later moved to London to work as an actor.

“There was a lot of unemployment in between. There always is for actors; it is just part of the game. I did whatever I needed to stay afloat. I waitressed pretty much the whole way through. I worked in a shop. I taught Pilates. I did voice-overs.”

It was when she returned to Ireland that she started to write. First plays, then short stories, and then Harvesting, the short story that turned into a novel. “I came to writing late. That was kind of a conscious decision. I was 40. I was dabbling with writing in my 30s, but at 40, I decided I really want to give it a go.

Harvesting, which was published in 2017, was later optioned as a movie. Recently, Harding has been co-writing the screenplay with director Michael Lennox, who directed Derry Girls. The project is being funded by the British Film Industry and Screen Northern Ireland.

Bright Burning Things has also been optioned, although she can’t yet say by whom. By any measure, a writer having both their novels optioned for movies has to be described as being very successful. When I mention this, Harding laughs. “But I’m still renting,” is what she says.

She talks some more about the challenges of earning enough of an income as a freelance worker to be able to actually buy property in Ireland.

“I am well into my 40s now, and I’m still renting; the shame you feel around that sometimes. I don’t know how people can get a mortgage here, unless you have family support; that stymies me. This is not just about artists: being freelance in any way is all a bit of a lottery. All self-employed people are really, really struggling at the moment.

“I don’t think that just because you choose to be an artist, or any kind of a freelancer, that it should equal such instability in terms of your home. The older I get, the more I think there is a real problem there in our society.” Harding talks about how creative work is not valued enough: not valued enough in hard cash to merit being paid enough for it that one can eventually afford to buy their own home.

“And if there isn’t a financial value to what you do, how else can you place a value on it?” she says. “When I was younger, my focus was all about creating the work, and the buzz of that was enough.” Now what she wants is “my own warm little space that nobody is going to kick me out of”.

While she misses the adrenaline of being on stage, she sees advantages in her work now as a writer; having autonomy over what she does. “As an actor I was sitting around waiting the whole time on producers and directors and waiting on other people to make decisions, and now I have a lot more creative control, so I love that.”

While most of the world was – and arguably remains – in an existential crisis this past 12 months, Harding used the first lockdown to draft a third novel.

“It’s a jittery novel; a high-octane thing,” is how she describes it. “I have a full draft, and now I am going to go back to it. I got distracted from it by the stress over moving home and trying to find somewhere to live.

“The voice is quite wild again. It’s set in a college campus. There is a gang of kids, students, who get together, and they are obsessed with the nature of truth and what truth means. They are all quite extreme characters. Then it begins to unravel and you discover they all come from pretty dysfunctional homes and they all want this kind of weird revenge. The novel is grappling with what truth means and it becomes quite twisted. The students are always playing truth games with each other. That’s where it starts and then it becomes quite dark. It’s got a thriller edge to it.”

Harding did European Studies at Trinity College. Is the Dublin university the campus where her third novel is set; a campus newly popular with Irish novelists?

Harding laughs. “I did go to Trinity, but I’ve called the place something else in the novel. But yes, you could say that it is a campus novel.”