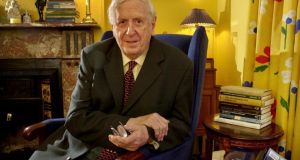 Garret FitzGerald ploughed through statistics on primary education in the early 19th century, the time of the hedge school. Photograph: Matt Kavanagh 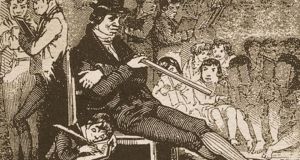 Garret FitzGerald was a truly amazing man. But there can be little more amazing than a former taoiseach and minister for foreign affairs, an international luminary, spending endless hours ploughing through the interminable reports and statistics on Irish primary education in the early 19th century.

One even senses his son John, the distinguished economist, gently shaking his head at times, in an affectionate and informative introduction, at his father’s insatiable curiosity. Of course Garret salivated over statistics to the point of infatuation, but the problem here is not that there were so few statistics but that there were so many, thanks to the 1821 census and the reports of a special education commission, published in 1825-26, whose background Gillian O’Brien, in a valuable opening chapter, contextualises with admirable clarity.

The real problem now is less a lack of statistical material than trying to figure out what it all means, and resisting the temptation to have the wish the father of the interpretation. Happily, the way Garret subjects the data to searching scrutiny lifts the subject to a new plane that will oblige future researchers to engage intensively with his findings.

Garret found a treasure trove in his sources, but the material was often arranged so haphazardly for his purposes that it required Herculean endeavour to rearrange them in some sort of coherent relationship to one another to answer his questions. Many a scholar would have taken one look at the endless rows of figures and screamed, “Let me out of here!” Not so Garret. Fascinated by figures, he sensed potential order and structure where others saw only chaos. He has done heroic work in identifying pitfalls and anomalies, and extracting sufficient coherent conclusions from rebarbative material to challenge many conventional assumptions. Where further refinement is required it will have to be on the foundations he has so painstakingly laid.

His findings are further impressed on the reader by a revealing range of maps by Mike Murphy and Helen Bradley, of the renowned cartography section of the department of geography at University College Cork, that illuminate the text.

A driving motivation that kept Garret exploring the statistical maze is obviously his passionate commitment to reconciling Catholics and Protestants. He is enthralled by the suggestive finding that a number of clergy, and of local schoolmasters, on all sides, did not necessarily regard the education of different denominations as mutually exclusive, with attendance at schools revealing an unexpected amount of intermingling in the decades before the establishment of the national system of education in 1831, and the gradual subsequent stiffening of the exclusivist attitudes of church leaders in a way that would lead effectively to separate educational systems for so long. There was nothing uniquely Irish about that, of course, but the tensions in the wider political world lent a particular cutting edge to the consequences in Irish circumstances.


Painstaking reconstruction
Garret’s painstaking reconstruction of school attendance in the 1820s excavates some evidence of more accommodating attitudes at the time, even if the implications have to be left rather dangling. Among the most fascinating findings is that coeducation of pupils of different religious persuasions was more widespread in Ulster than in the other provinces. But it remains to be established how far this did actually lead to more mutually tolerant attitudes in later life. What a wonderful research project it would be if it were possible to trace the impact of their education on the later attitudes of the pupils. If only Garret had lived, he would surely have put us even further in his debt by pursuing this issue further.

Many of the answers in so pioneering a study must be provisional. Garret’s own research constitutes the core of the book, but the value of the volume as a whole is further enhanced by not only Gillian O’Brien’s opening section but also the concluding one by Cormac Ó Gráda, the eminent economist and historian, whose chapter “School attendance and literacy in Ireland before the Great Famine: a simple baronial analysis” shows how fruitful Garret’s work can be as a stimulus to further inquiry.

Garret himself was at pains to point out the provisional nature of many of his findings. What does it mean, for instance, to conclude that while one observes what a relatively high proportion of children, by international standards, aged six to 13, were registered on the rolls? One has to be very careful about their level of education. There is no firm evidence about how long, or how often, pupils attended, certainly not on the regular daily basis taken for granted nowadays, given the seasonal variations in demand for labour in an overwhelmingly rural country.

This was not only an Irish problem. The figures for school attendance in other European countries are themselves riddled with uncertainties, and often based on sources at least as problematic as the Irish ones. But if there was anyone who could have clarified the anomalies, it was Garret, and one of the sadnesses in pondering this book is the realisation that he himself would often have been the best qualified to answer many of the issues his research raises.

That one can even begin thinking of pondering these questions reflects the stimulus Garrett’s findings, however provisional some may be, should provide for further research in a field that should be central to the study of our history but that has often fallen between history departments and education departments.


Sense of nostalgia
If I may introduce a personal note, I read the volume with a sense of nostalgia, recalling that the last time I heard Garret lecture, a few months before his death, it was on this very topic, to a class of Miriam Nyhan’s at Glucksman Ireland House, the Center for Irish Studies at New York University, where he had given many memorable presentations in previous years. He soon had the class mesmerised, such was the speed and verve and irrepressible enthusiasm of his delivery, punctuated by his jumping up to the map behind him several times to point out where exactly in Ulster were the denominationally coeducational schools he was talking about.

This was capped later in the day when the time of his public interview at the Cornell Club had to be advanced to allow him to leave rather than to begin at 7pm, because Henry Kissinger had in the meantime invited him to dinner that evening. There was still a good crowd, but news of the earlier start did not get out in time to many of the intending audience, with the result that the elevators he was trying to get into at 7pm to go down were packed with people coming up – much to Garrett’s bemusement, as he kept wondering out loud where were all those people going, it apparently never crossing his mind that they were coming to hear him.

That was the last time I saw him. But though the voice be stilled and the pen laid down forever, this last, sadly posthumous work is one more reason why Garrett’s memory will survive as long as scholars care about the pursuit of knowledge or the Irish care about their history.