Despite awards and acclaim, the impoverished crime writer was set to quit – then the phone rang 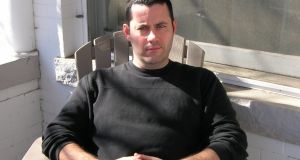 Adrian McKinty: “The good news was that I was going back to being a writer and we had $10,000. The bad news was that I’d hooked into some major league craziness. It’s like that Al Pacino film – I thought I was out and these guys got me to do one last job.”

It was 1.30 in the morning in Melbourne and Adrian McKinty had just got home after dropping off his last Uber customer of the night at the airport. His phone rang. It was Shane Salerno, agent to authors including Don Winslow, and it was a call that would pull McKinty into “some major league craziness”, ending in a six-figure English-language book deal and, last week, a seven-figure film deal from Paramount for his forthcoming novel The Chain.

“Don told me you’ve given up writing,” said Salerno. McKinty, an award-winning crime novelist, had recently blogged about his decision to quit being an author. Beginning with his debut, Dead I May Well Be, written while he taught high school English in Colorado, and continuing with his award-winning series about Northern Irish detective Sean Duffy, McKinty’s books might have won him prizes and great reviews, but they weren’t making him any money. The family moved from the US to Australia in 2008 because McKinty’s wife, author and academic Leah Garrett, was offered a job there. Now the family had been evicted from the home they’d had lived in for eight years, and he was working as an Uber a cab driver (“the world’s worst,” he says now) and bartending in an attempt to actually bring in some cash.

Now Salerno – a man he’d never spoken to before – was quizzing him in the early hours about his decision and his books. McKinty told him about his series of Belfast-set crime novels, and Salerno asked if he had ever thought about writing one in America.

As it turned out, McKinty had. In Mexico City five years earlier, while trying to write a novel about Trotsky (“it was a big fiasco, it was going nowhere”), McKinty learned about exchange killings: where a person offers to swap themselves for a kidnapped family member while a ransom is raised. He’d combined this with the idea of chain letters – he’d grown up in the ’70s and ’80s in Carrickfergus, Northern Ireland, “where we used to get these bloody horrible chain letters; we all believed it”. These were the seeds for The Chain, in which a mother is told her daughter has been kidnapped, and that the only way to get her back is to kidnap another child. And so on, down the chain.

Write it, said Salerno. “Maybe in a couple of years, when I’ve got my finances sorted out,” agreed McKinty. “What if I wired you $10,000 into your bank account tonight?” Salerno offered. McKinty said he’d think about it; Salerno said no, go and write it now.

At around three in the morning, McKinty gave it a go, writing the first 30 pages of what would become The Chain, sent it off and went to bed. His phone rang again at 4.15.

Two years on, The Chain is about to be published. Starting with Rachel’s discovery that her daughter Kylie has been kidnapped, then following her attempts to drum up the ransom and find someone else to kidnap, it is a brutal, breathless race to the finish which forces the reader to ask, again and again: what would I do, in that situation?

Recent reports have highlighted just how hard it can be to make a living as a “midlist” author – one whose books are judged good enough to publish, but not good enough to support with any significant marketing budget. In the UK, writers’ earnings have fallen by 42 per cent in real terms since 2005, according to the Authors’ Licensing and Collecting Society, with median earnings now at under £10,500 a year – well below the minimum wage. The worldwide picture is similarly disheartening.

McKinty describes his life while writing his Sean Duffy novels as reminiscent of Dostoevsky’s The Double: “On the surface I was winning all these awards, getting great reviews and getting praised. On the other hand it was completely fake. I wasn’t providing any income for the family. They were selling two or three thousand copies a year. You can’t really live on that. So my poor wife was working full-time and I was living this life of the artist.”

When they were evicted from their home, McKinty and his children stood in front of the house, “all their little stuff was just sitting there on the pavement and I was thinking to myself ‘Oh God Adrian, what have you done with your life?’ I’d been a teacher, with a good income. I thought ‘You’ve been off on this bloody ego trip, you’re going to get yourself a job, quit this writing, go back to teaching and call it a day for a couple of years.’”

Winslow, the bestselling American author of 21 novels, had only met McKinty briefly at a conference years earlier when he read of his retirement from writing. “It was really upsetting to me to see how he was being treated,” he says now. “Someone with Adrian’s talent should be able – at the very least – to make a living wage at what they want to do. He was broke, evicted from his home, and really struggling. He wanted to quit. I knew the feeling. A number of years ago I was in a similar place.”

Back then, Salerno had refused to let him quit, and Winslow credits him for “turning everything around for me”. He asked him to do the same for McKinty. McKinty took some convincing, Winslow says. “He had flicked that switch off in his head and we had to figure out a way to turn it back on. When you have had two decades of disappointment, it’s hard to believe.”

McKinty remembers telling his wife the good and bad news: “The good news was that I was going back to being a writer and we had $10,000. The bad news was that I’d hooked into some major league craziness. It’s crackers. It’s totally bizarre. It’s like that Al Pacino film – I thought I was out and these guys got me to do one last job.”

That job resulted in another surprising phone call from Salerno last week: a film deal with Paramount, for what Deadline says will be a guaranteed “seven figures” for McKinty. “I said, mate, you should have told me to sit down first … Can you say it all again really slowly as if you’re talking to an idiot? This is definitely not a wind-up?”

As for Salerno, he’s keen that the focus is on McKinty rather than himself. “Adrian didn’t have a product problem,” he says. “The product was consistently excellent, but for 20 years publishers failed him. No publicity, no marketing, terrible covers, no book tours. He had zero support. After examining everything, I felt strongly that those publishers were leaving a champion racehorse in the barn. I made it my mission to get him on the track, then just let him run. The Chain is a new start of what I truly believe will be a brilliant writing career.”

The Chain was published by Orion yesterday. Adrian McKinty will be in conversation with author Steve Cavanagh at the Murder One Midsummer series on Tuesday, July 23rd at 6.30pm in Pearse St Library, Dublin. Tickets available murderone.ie/