Wobblers and warriors: the latest in children’s books 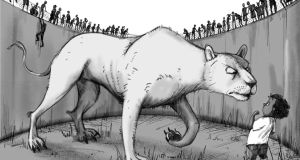 Have you ever wondered how scary a human must seem to a spider? In Milton The Mighty (Chicken House, £6.99, 9+) Emma Read ponders just that. The book opens with a dramatic “eight-leg wobbler” of a scream. Milton has just been spotted by Mr Macey, owner of the house where Milton lives with a variety of arachnid friends. Milton cannot believe that he has elicited such a clamorous response. “As a tiny false widow spider, [he is ]completely unscreamworthy, utterly unterrifying and occasionally mistaken for a raisin.” However, Mr Macey is determined to kill every spider he comes across, especially false widows like Milton. Thankfully, Milton has an ally: Mr Macey’s arachnophiliac daughter, Zoe, “Chief Rescuer of Spiders from the Bath”, who is determined to thwart her father’s fears and save the many-legged creatures she shares the house with. Read’s humorous story gives us an entirely different perspective on the much-maligned spider.

Spiders aren’t scary, they are super-smart, watching everything that us “house-humans” do: they even know how to read and use laptops. What ensues is an adventure story that will appeal to both nature-lovers and those who wouldn’t know their false widows from their black ones. Milton and his web-spinning sidekicks are as fearless and charismatic a crew of characters as any others you might come across in children’s fiction.

Stella T Jones’s The Only Way is Badger (Little Tiger, £6.99, 3+) also features a superior protagonist from the natural, rather than the human, world. Boastful Badger believes he is the best, and he is adamant, not only that all the other creatures of the forest know it, but that everyone else “makes an effort to be a bit more badger”. However, Deer’s “hooves weren’t made for digging”, Moose can’t fit in a burrow, and Hedgehog, Bunny and Beaver can’t bark. By the time Badger has built a wall to protect all creatures as badgery as he is, he discovers that he is alone. Jones’s playful text explores concepts of difference in an accessible way – “If it’s not black and white, then it’s just not right!” is one of Badger’s more memorable mantras – while the contemporary political parallels are bound to amuse parents reading aloud. Carmen Saldana’s vivid images, meanwhile, refuse the two-tone uniformity that Badger demands, except in the climactic double-page spread, when Badger realises that he has banished all the “colour and fun and laughter” along with his friends.

What Badger really needed was someone like Evie, the sensitive protagonist of Matt Haig’s Evie and the Animals (Canongate, £12.99, 9+), to convince him that his plan is doomed to fail. Evie has a special gift: “without moving her lips or making a sound, Evie could talk to animals.” This is a particularly useful talent when “dads, in particular, are one of the most complicated types of animals in existence”. Evie’s mum died in mysterious circumstances when Evie was a baby, but when her granny reveals it was because she too could talk to animals, Evie finds herself drawn into danger. She becomes prey for the evil Mortimer Mormiter, who proves her theory that “humans are the deadliest animal”. Haig brilliantly weaves together environmental concerns with a captivating carousel of dramatic incidents. The characters – both human and animal – sing with life and Emily Gravett’s black and white sketches are expressive of a wide range of emotions, from the animated face of Evie’s eventual sidekick Scruff to Evie herself, with her slouchy beanie, baggy eyes, and fretful kind smile.

There is also a gentle environmental theme to Rob Ramsden’s We Found a Seed (Scallywag Press, £11.99, 3+). A little boy and girl known only as “us” find a seed one day while flying a kite. They are unsure at first what to do with it. They play and dance and sing for it, but it doesn’t grow. When they tuck the seed up in the soil for winter, it starts to reveal its mysteries, producing a magical sunflower as tall as they are. Ramsden’s spare text echoes the inscrutable seed, while the juxtaposition of image and text provides a finely paced visual representation of patience. Just as the children must wait for the seed to reveal itself, so the reader must wait too.

Fionn, the hero of Catherine Doyle’s The Lost Tide Warriors (Bloomsbury, £6.99, 10+), could do with some patience. His island home of Arranmore is being attacked by a mass army of “dead-eyed soulstalkers”, who want to spill his blood to satisfy their leader, the evil witch Morrigan. Unfortunately, despite being the chosen one, Fionn hasn’t found his magic yet. Luckily he has many friends willing to help him. There is an army of “fin-tailed blue-skinned merrows” ready to charge if he can only summon them, and, most significantly his grandfather, a Storm Keeper before him, who has magic to spare. Doyle’s book, the second instalment of the Storm Keeper trilogy, tempers the story’s ancient magical thrust with an engaging everyday drama. The portrayal of sibling rivalries, family factions, and friendships are reassuringly familiar, while Fionn’s relationship with his grandfather is surely one of the most tender inter-generational relationships to find a voice in children’s literature. It would be a hard-hearted reader who won’t shed a tear at the book’s conclusion, when the sacrifice that is made is not the one that is demanded. It will leave the reader on tenterhooks too; the final instalment is due out next year.