From the North Sea to the Med: a 66-year-old Irishman’s long walk south

Sean Rothery cycled across Europe in 1950. When he retired, he walked 2,300km from the Netherlands to Nice 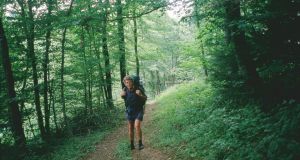 The Jura: Sean Rothery on the way to St Hippolyte. Taken from A Long Walk South, An Irishman’s Trek on the GR5 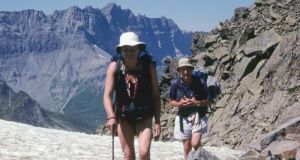 Nuala Rothery and Nanno Huismann on the Brevent.

I retired from a long academic career when I was 65. I had no choice, but the view back then and possibly still is that retirement is a good thing, a time to put your feet up, play golf or take up a new hobby.

I had an idea for quite a while before the due date of leaving would arrive and that was to undertake a long journey on foot. My motives were mixed. A challenge, perhaps, to growing old? A celebration of freedom? The cliche “because it was there” seemed reason enough since I am a long-time lover of mountains and wilderness. William Hazlitt’s essay,On going a journey, which I had read as a 14-year-old in Synge Street school, made a lasting impression.

The soul of a journey is liberty, perfect liberty; to think, feel, do just as one pleases.

The taking on of a reasonably hard physical task was given an added impetus by my attendance at a “retirement” course, organised with philanthropic zeal by the institution which had decreed that every worker over 65 was no longer useful or capable. The various speakers were harmless if anodyne, but the doctor, an overweight forty-something, who came on to lecture the “senior citizens” about their health, was patronising with his admonition for us to take long walks, “at least two or three miles, down to the end of the pier in Dún Laoghire and back, for instance”. I resolved there and then to go on a real journey, not quite a Patrick Leigh Fermor walk to Constantinople, but something nearly comparable and dramatic – a long journey on foot through space and time.

Leigh Fermor walked to the Danube and then on to Constantinople from the Hook of Holland in the 1930s. This was long before the vast road network and monstrous traffic levels of the late 20th century made such a journey today seem like madness. After the second World War the French were among the first to establish long-distance walking trails through whole regions of their country. These were given the name Grande Randonée and cleverly linked up old bridle paths, forest trails, canal towpaths, riverbanks, transhumance paths, Roman roads, minor roads and mountain passes to create a huge and intricate lacework of walking routes. One of the earliest of these was the Grande Randonée Cinq, popularly known as the GR5, which originally stretched from the northerly tip of the Vosges mountains, through the Jura, before traversing the French Alps to Nice. In the last two decades the GR5 was extended through Lorainne to the border of Luxembourg and then on northwards through the Ardennes and across Flanders to Holland. In the 1980s the Dutch extended the route to the Hook Of Holland; thus making it the North Sea to the Mediterranean Long Distance Walking Trail – the GR5.

Eight months before the start of my long walk I took a few training trips. The most important of these was a nine-day trek around the Kerry Way in the wild southwest of Ireland. Apart from getting fit, I learned a lot about clothes and equipment. I found that the boots I had planned to use were a disaster, leaving me with spectacular blisters after three days. Settling for wet feet, I finished the trail in light training-type shoes. These became my choice for the long walk and were largely a success. I brought two pairs and wore one pair out after 1,500km.

In 1950 I had set out on a similar journey across Europe. I was 22 and a student of architecture. This was my first visit to mainland Europe and just five years after the second World War when travel became possible. My plan was to cycle to Rome and back. A sort of plebeian version of the Grande Tour. In the tradition of students of architecture, I carried a sketchbook, along with my Brownie box camera. Landing at Dieppe in the middle of August, I cycled to Paris via bombed-out Rouen. The road to the southeast was quiet in those days and my memory is of huge distances covered along straight roads lined with tall poplar trees.

I rode through the Gap of Belfort – where I walked 44 years later – into Switzerland, to be amazed by the order and obvious wealth of the country after the horrors of the war years. Everywhere in France there were still signs of destruction: smashed bridges, ruined buildings, walls pockmarked by shells and bullets and burned-out tanks in the fields. The first sight of the Alps enrolled me as a would-mountaineer for life. Over the Gotthard pass and down into Italy and on to Rome. The return journey was hard – no money, hunger and exhausting cycle rides along the coast to Marseilles. Halfway up the Rhone valley I got a few days’ work picking grapes that gave me enough cash to survive to Dieppe and home.

Now it was different. I could sleep in a comfortable bed and had no need to worry about near starvation. I walked for just four months, often feeling that my journey was now a way of life. In the 2,300km travelled there was heat and cold and in the high mountains storms to be endured but always the beauty of woodland and meadow, birdsong in the early morning and the prospect of an evening meal and the luxury of rest at the end of a long day. Ghosts of the past were relived, most poignantly in the Alps where my climbing friends Fred and Andre had been killed on the Aiguilles of Chamonix. My own serious accident in 1967 in the Swiss Alps was a vivid memory when I gazed out at those shining peaks.

Near the end of my journey, in the last of the high peaks and passes, my most powerful feeling was one of sadness that my long walk was over. In those final mountain stages the crossing of innumerable high passes was even more of a metaphor for attempting rediscovery of my lost youth than the journey south itself. The question I asked myself was, as I got my first view of the Mediterranean, “Would I ever do anything like this again?” In the past, whenever I left a place where there was beauty and adventure, I wondered if I would ever return. This was my thought, looking out at the sublime sea.

Keep on trekking
Since his long walk south Sean Rothery has continued his mountain and wilderness adventures and walks, although none as long as the one he undertook at 66 years of age. With his lifelong partner Nuala, who sadly passed away last November aged 80, he did many great walks in New Zealand, including the formidable wilderness Routeburn trek when he was 80 and Nuala 75. They both did the Tour Mont Blanc circuit in their seventies. Aged 71, Sean took part in the Everest Base Camp trek from the mountain village of Jiri to climb Kala Patar and see the famous white plume streaming out from the top of the world. He climbed Mont Blanc at 73 and his last big trek with Nuala was the three-day Abel Tasman Trail on the South Island of New Zealand in January 2013. Nuala was in her 80th year and he was 85. Sean continues to mountain walk and orienteer.

A Long Walk South – An Irishman’s Trek on the GR5 by Sean Rothery is published by The Collins Press, price €12.99. It is available in all good bookshops and online from collinspress.ie