From the archive: Documents reveal no major concessions

In The Irish Times on December 19th, 1980, David McKittrick and Fionnuala O Connor analyse British documents on a revised prison regime given to them by IRA sources 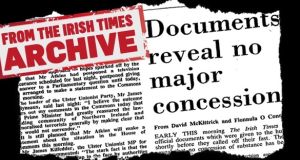 EARLY THIS morning The Irish Times was shown official documents which were given to the hunger strikers shortly before they called off their fast. The documents reveal that no concession of substance has been made by the British Government.

Two documents were made available to use by Provisional sources, both papers clearly originating the from the Northern Ireland Office. The first, consisting of two pages, was headed ‘What will happen when the protest ends’, and took the form of a message from the Secretary of State, Mr Atkins, direct to the prisoners.

The second was 34 pages long and was entitled ‘Regimes in Northern Ireland prions. Prisoners’ day-to-day life with special emphasis on Maze and Armagh.’

The documents make it clear that prisoners will be expected to wear prison-issue clothes during working hours, though one repeats Mr Atkins’ statement of October 23rd that civilian-type clothes will be issued rather than the old-style denim prison uniform.

Prisoners will be expected to do prison work, although the document states that ‘work’ will not be interpreted narrowly. On the question of restoring remission lost because of the protests, Mr Atkins promises to immediately begin reviewing each prisoner’s case individually as he or she comes off protest.

Association, letters, visits, parcels, as has been stated all along, will be available to conforming prisoners.

Without conceding anything, however, both documents – particularly the Atkin’s message – are worded in a markedly tactful style.

On the two key points of work and clothing the detailed document has the following to say: “’Work’ is not to be interpreted narrowly- it may include education for those whom the Governor and education officer consider it suitable, or who need remedial teaching. If, for any reason, a prisoner or group of prisoners cannot be employed on a particular day, they may be given extra PT, games or handicraft/study time instead.

“Work clothing has hitherto compromised a two-piece denim suit and a blue-and-white striped shirt. This single pattern uniform will, following the Government’s decision announced on October 23rd, shortly be replaced by a range of patterns and colours of civilian-type clothing, compromising trousers, pullovers and shirts. Underwear, socks and shoes are also issued; these items will continue to be issued unchanged.”

The two-page Atkins message began with a brief re-statement of the Government’s declaration on December 4th of what was available to conforming prisoners. It went on to say that it was hoped this would end the protest and declared: ‘The demand for political status is not going to be granted. There is no reason to go on. The Government has made its response. I want to spell out for you and your families what will happen when the protest ends.

“Any prisoner coming off the dirty protest would immediately be put into a clean cell. If, as I hope, all prisoners end their protest, we shall have the task of cleaning up all the cells (done) right away and this would take a week or ten days.”

The document continues: “Within a few days clothing provided by their families will be given to any prisoners giving up their protest so that they can wear it during recreation, association and visits. As soon as possible, all prisoners will be issued with civilian-type clothing for wear during the working day.

“From then on, as I said in October, denim prison uniform becomes a thing of the past for all male prisoners.”

Prisoners who ended the protest would be able to associate within each wing of the prison block in the evening and at weekends. If large groups of prisoners ceased protesting simultaneously a few days might be needed for cleaning up the cells. It should be possible “to work out for every prisoner the kind of available activity which we think suits him best- work (including, of course, the work of servicing the prison itself), vocational training and educational training.”

On remission, the document states: “Provision already exists for lost remission to be restored after subsequent misbehaviours.”