Frank Connolly: Why I wrote a thriller about the Dublin bombings

Having covered the bombings as a journalist, the story felt like unfinished business 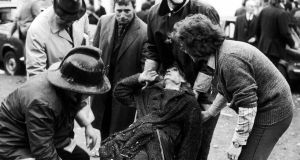 Frank Connolly, on right with long hair, on South Leinster Street, Dublin, after the bomb in May 1974

On the evening of Friday, May 17th, 1974, I was walking across the sports ground of Trinity College Dublin when a loud bang and shaking ground almost blew me off my feet. I could see smoke rising from the other side of the college wall less than 150 yards away. I ran to the Lincoln Place gate and on to South Leinster Street to a scene of utter carnage. Two shattered bodies lay close to the burning wreck of a car close to the wall, people lay badly injured on the street, others were wandering around in confusion and tears.

I helped one crying woman with a damaged leg as we waited for the ambulance to arrive. Huge shards of glass fell from the glass office building on Clare Street, narrowly missing crowds being herded by gardaí from the bomb scene. The chaos, pain and awful injuries were inflicted on many more at Parnell and Talbot streets, where car bombs also exploded. It was during rush hour on the day of a bus strike as people headed for Connolly and Pearse train stations. Three no-warning bombs rocked the city within minutes of each other, killing 26 people and an unborn child and leaving many hundreds injured, with another seven blown apart in Monaghan town some 90 minutes later.

As a journalist, I investigated the bombings over subsequent years and decades, working with survivors and victims to establish who bombed Dublin that day, and why. We also wondered why the Garda investigation into the single biggest atrocity of the conflict, then or since, was closed after just a few months, why crucial evidence was not preserved and why known suspects were not pursued.

Successive inquiries, including by High Court judge Henry Barron, suggested possible collusion between loyalist paramilitaries and British security forces in the Dublin attacks. In contrast with the bomb in Monaghan, the three car bombs contained explosive material and displayed a sophistication not previously associated with the UVF and UDA. Within days of the attacks, the loyalist organisations denied any role in the Dublin bombings. Almost 20 years later, in 1993, and following an investigation by the Yorkshire TV programme Hidden Hand, which named key suspects and raised the prospect of security force collusion, the UVF claimed responsibility.

In October 2007, then taoiseach Bertie Ahern told the Dáil that the various State inquiries had managed to obtain relevant information from the British government but, he conceded, that “any further information is probably in the hands of MI5 or MI6 and I do not see how we will get it.”

At the annual commemoration of the Dublin and Monaghan bombings, organised by Justice for the Forgotten and held on Talbot Street each May at the monument to those killed, an assortment of ministers for justice, most recently Charlie Flanagan, have repeated their determination to establish the truth and identify those responsible, and to continue seeking any files held under wraps in London.

A Conspiracy of Lies

Last April actor Stephen Rea launched my novel A Conspiracy of Lies, which is set in Dublin in the wake of the bombings. The two main characters, Trinity student Angie and restaurant chef Joe, are young people who are both affected, and brought together, by the events of that day. Working in a city bistro frequented by politicians and businessmen, they discover information that they suspect may point to those responsible and their motivation. The story brings us through the politics of the time, when the conflict in the North overwhelmed the government of the day and its relations with Britain. It explores the culture of the city through the youthful eyes of the main protagonists as well as the realities of life, work, emigration, crime and punishment, political censorship and corruption and the repression of women’s rights associated with that dark period of contemporary history. While referring to real events and people in politics and public life during the 1970s, it is entirely a work of the imagination.

The story is narrated through the voices of Angie and Joe in successive chapters as they develop their understanding of the society around them and encounter the various forces of the State and authority in their quest to identify those responsible for the tragedy that has so utterly changed their lives. Along the way they have to deal with unscrupulous employers, ambitious politicians, spin doctors and journalists, good and bad cops, solicitors and priests as well as the forces of law and order determined to block their path.

They also find love in harrowing times and in unexpected ways, in their own family, their communities and with each other. Most of the action takes place within a half mile of the city centre, and their journey of discovery brings us back to the music, fashion, sights and sounds, language and humour of the time, to watering holes and bedsits as well as to the centres of law and politics. For those too young to remember it provides an insight into city life, its politics and places that can help make sense of where we are now and what is best never repeated.

I was a young student when the bombs went off across town. As I researched the period and conversed with so many people in the writing of this book, I was struck by the number who recalled exactly where they were on that day. Indeed, almost everyone of a certain generation could remember exactly what they were doing and what happened to them and others caught up in the aftermath of the attacks. It is truly extraordinary that so little has been written, or at least published, about the single biggest loss of life in a single day, in the capital city. For many years it was not written or talked about in the public sphere; too painful a subject for many, too politically sensitive or difficult during the years of further, unrelenting, violent, destructive conflict.

On Friday, May 17th last, Dublin poet Rachael Hegarty read from her recent collection May Day 1974, which draws on the memory and lives of those whose future was wiped out by the events of that afternoon 45 years ago. Other works of non-fiction have sought to establish the facts of what happened and to document the stories of the real people killed and damaged. Beyond those attempts and the photographic and film records occasionally reproduced, there has been a paucity of creative material that tackles the subject.

By re-examining this murky past through fiction, I was permitted to explore the context of the time, the political and cultural background to the bombings, contentious and controversial moments including the IRA campaign of bombing across the North and Britain, including Birmingham and Guildford, loyalist, RUC and British army killings, the assassination of a British diplomat in Dublin, the heavy gang, the resignation of a president, the struggle for the heart of nationalism in Ireland during the turbulent and often shocking 1970s.

I wrote this book between and since completing my recent non-fiction work of investigating political and corporate corruption (Tom Gilmartin: The Man Who Brought Down a Taoiseach, 2014) and Nama-Land (2017). Moving into the world of imagination and fiction was a challenge, for me and for my editors at Mercier Press. It is indeed a different discipline, where concern to ensure that every fact and assertion is validated becomes one where characters, style and pace are sacred.

I started this book with no particular structure in place. I opened with my memory of the day of the bombings and in the back of my mind the intention was to write a political thriller that might end some time in the 1990s. I was planning to use much of the material I gathered as an investigative journalist over many years – people, places, incidents and anecdotes, much of which I would perhaps never publish as fact, for legal and other reasons.

Unlike the reporting and interpreting of real events, however, the story took on a life of its own, the twists and turns emerging from the characters and the plot. It ends some five years after that day in May 1974. It was a rewarding, fulfilling journey, which I would love to continue. I hope that readers think so, too.

A Conspiracy of Lies is published by Mercier Press. Frank Connolly will be speaking at Féile an Phobail in St Mary’s University College, Belfast, at 5pm on August 8th