Book review: Leader of the Surrealist movement’s story of his enchantment 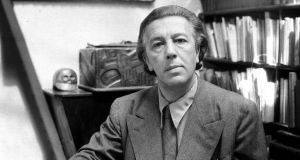 Andre Breton: ‘There is no use being alive if one must work.’ Photograph: Roger Viollet via Getty Images

Nadja may not be a great book, but it is a strange and unique one. Is it a novel? Not really. Or rather, yes, but in the attractive French sense in which pretty much anything can be called a novel – the French have no need for such generic ghettoes as “creative non-fiction”.

Nadja is André Breton, leader of the Surrealist movement’s story of his enchantment with a liminal, odd young woman who seems to him the living embodiment of surrealism. By the end of the book, these qualities have landed Nadja in the mental asylum, which gives Breton a chance to fume about the psychiatric profession – “They shut up Sade, they shut up Nietzsche; they shut up Baudelaire – before abandoning Nadja in order to write about her.

Avant-garde trailblazer though he was, Breton does come across a bit insufferable. He talks pompously at the object of his fascination, and occasionally hectors the reader too (“Anyone who laughs at this last sentence is a pig”). What makes Nadja interesting, though, is Breton’s keen sense of mystery and magic, and the plausibility-stretching coincidences he recounts. Nadja appears to him almost as an emissary from some non-terrestrial plane, a being freed from the “hateful prison” of logic and alert to numinous transmissions.

There is a certain type of reader – me – who will read books simply because they are set in certain cities: Paris, Tokyo, Berlin. The mystique of street names is sustenance enough even in pages heavy with indifferent plots – not that there is any plot to speak of in this instance.

Among other things, Nadja is a whirl through the squares and boulevards of a Paris that was still, as Nietzsche had put it a few decades prior, the only city in Europe for artists.

Breton is into digressions. He fulminates against boring jobs – “There is no use being alive if one must work” – and against the boring novels that the Surrealist movement naively believed it would do away with – “Happily the days of psychological literature, with all its fictitious plots, are numbered.”