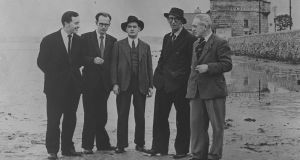 In another age, the natural description for Anthony Cronin – who has died aged 88 – would have been “man of letters”.

He was a literary polymath – a fine poet, a vivid comic novelist, a brilliant memoirist, an illuminating critic, a provocative columnist and a searching and subtle biographer. He was also what might be called an artistic politician: as adviser on the arts to taoiseach Charles Haughey he was a tremendously influential and largely benign figure.

It was a mark of his importance that, in a political era defined by the antagonism between Haughey and Garret FitzGerald, Cronin was kept on by FitzGerald when he succeeded his great enemy as taoiseach.

It is easy, but quite unfair, to view Cronin through the prism of more prominent figures. As an artist, he is somewhat in the shadow of the great writers he knew so well and evoked so vibrantly in his biographical works: Flann O’Brien, Patrick Kavanagh and Brendan Behan. His standing as a public intellectual, meanwhile, will always be coloured by his relationship with Haughey whose egregious corruption he declined to confront. But he deserves to be appreciated in his own right as an important figure in Irish literary modernism.

It would be especially unjust were Cronin’s memory to be wrapped in nostalgia for the 1950s generation. He was genuinely close to O’Brien, Kavanagh and Behan. His superb memoir of them, Dead as Doornails (1976), will always stand as the best evocation of the bohemian literary culture in Dublin that centred on McDaid’s pub and the bedsits and dives of Baggotonia.

His biography of O’Brien, No Laughing Matter: the Life and Times of Flann O’Brien (1989), is a very rare example of a portrait that is both intimate and objective, combining personal knowledge with serious research. He appears in those famous photographs of the inaugural Bloomsday jaunt in 1954, as the younger, more earnest sidekick of the established writers.

But the very titles of those books should ward off any temptation to nostalgia. They are utterly realistic in their exploration of lives drowned in alcohol and frustration. His reminiscences of Behan in particular have a tragic power: no one has ever caught so brilliantly the life-giving extravagance of this extraordinary personality and thus the dreadful waste of his talent and life. In Dead as Doornails and in his best novel The Life of Riley (1964), there is no flinching from the incestuous, impoverished and marginalised nature of that literary Dublin.

It is, indeed, a recognition of the wasteful and often squalid aspects of this culture that drove Cronin’s great achievements as an arts politician. He was not against institutions – he was influential, for example, in the establishment of the Irish Museum of Modern Art. But he was always concerned primarily with the life of the individual artist and the need for that life not to be sapped by penury and indignity. His key role in the establishment of the Aosdána scheme lay in convincing Haughey of the value of making available a modest stipend that could keep distinguished artists from the poverty he had seen up close and, at times, experienced.

Aesthetically, Cronin had no time for nostalgia either. In his criticism and in his own poetry he was a fierce enemy of Irish romanticism. In the 1980s, it became academically respectable to champion James Joyce, as opposed to WB Yeats, as the exemplary Irish artist of the 20th century, but Cronin had done this decades earlier.

He was also an early and consistent champion of Samuel Beckett, in whose work he saw the kind of tough, courageous and restless cosmopolitanism that Irish art could aspire towards. He called his fine biography of Beckett The Last Modernist (1996). It was a title he might well have kept for himself.