Finding poetry in the letters of Vincent van Gogh

Larry Stapleton on the background to his collection, The Boundless and Miraculous 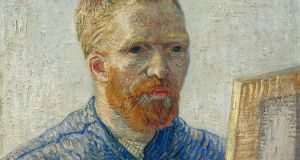 When I was about seven or eight years old, one day we were to go the cinema to see one of the blockbusters of the day, which I think must have been The Ten Commandments. There were two cinemas in Sligo at the time, each having a single screen. We should have gone to the Savoy, but we went to the Gaiety, where the film that was showing was Lust for Life.

Vincent van Gogh’s portrayal by Kirk Douglas in that film gave me an early introduction to the artist and to dramatic scenes from his amazing life. Those that stayed with me included the artist struggling to paint outdoors in an unrelenting mistral, the crowd turning on him after he had cut off his own ear, and one man there standing by him – the bearded postman. The film made a more lasting impression on me back then than any of our usual fare of westerns.

I was relatively late, however, in coming to write poetry. My first published poem was in Poetry Ireland Review in 2012. Around that time I attempted to write a poem about Van Gogh. I had an illustrated book to hand containing extracts from his letters, which I went to for further inspiration. However, I quickly saw that these letters were themselves full of poetry and I turned instead to writing a “found poem” based on the letters. Found poetry comes from writing not originally intended to be a poem, reframing it as such.

As I worked on the found poem, it began to grow longer and longer, and I eventually realised that there were in fact several quite distinct poems emerging. Also if I was to make a sequence of poems, then I needed to look beyond the small selection of letter extracts in that book. The source text I chose instead was Vincent van Gogh, Ever Yours, The Essential Letters, edited by Leo Jansen, Hans Luijten and Nienke Bakker, published in 2014 by Yale University Press – an abridged edition of a complete six-volume publication of the letters.

My sequence of found poems amounted eventually to a sizable collection. Knowing how unusual such a collection was, I went to Poetry Ireland for advice. They recommended that I start by having a critical assessment done, which they agreed to set up and the poet and critic Matthew Geden agreed to undertake. That process led to my working the poems into the sonnet form – in a variety of its guises (and also to going with The Boundless and Miraculous as the title, originally my second choice). Most of the poems were amenable to this, typically in some hybrid form, yielding the characteristic sonnet turn or concluding couplet in an overall rhyme scheme – especially if one takes a liberal view of what constitutes a rhyme. I was further advised by Poetry Ireland to go for an illustrated edition.

As the translations I used were recent, I sought to secure copyright permission from the copyright holders, the Van Gogh Museum, Amsterdam (Vincent van Gogh Foundation), who turned out to be very accommodating. The majority of the illustrations used in the book are from their collection. Further images I wanted for the book and permissions for their use had to be sought from museums, galleries and private collections across Europe and the US. The Liffey Press came on board as publishers and with the suggestion that I add in some biographical pieces on Van Gogh’s life to give some background to the poems.

Over the seven or so years that all this took shape, I brought several of the found poems to poetry groups and public readings in Dublin and Wexford and the response to them was uniformly positive, indeed enthusiastic – all thanks, more than a century on, of the writing of Vincent van Gogh, which in a unique way this book now aims at celebrating.
The Boundless and Miraculous is published by Liffey Press