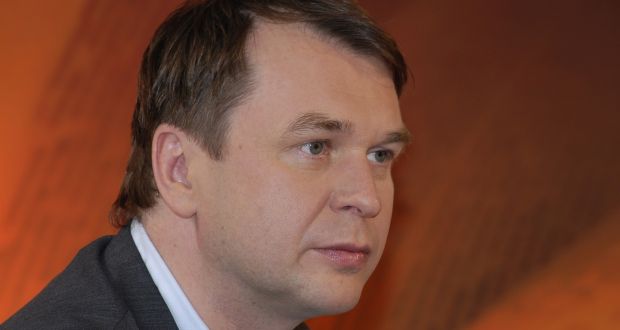 Terrorised by his neighbour, and fearing for his wife and children, Berlin architect Randolph Tiefenthaler takes the law into his own hands. “At about 8.40 am,” Randolph tells us, “the accused, Herman Tiefenthaler (my father, that is), left the flat of his son, Randolph Tiefenthaler, with the Walther PPK, then in his lawful possession, and descended to the basement, where he induced the tenant, Dieter Tiberius, to open the door to his flat, either by knocking or ringing the bell, and then killed Tiberius with a close-range shot to the head.”

That sounds like the conclusion to a conventional tale of a law-abiding citizen driven to murder a creepy and potentially life-threatening stalker, but Dirk Kurbjuweit’s novel is by no means a conventional psychological thriller. Kurbjuweit, deputy editor-in-chief at Der Spiegel, was inspired to write Fear as a result of his own experience of being stalked; having laid out the events described above as early as page 16, Kurbjuweit then proceeds to tease out the cat-and-mouse game that developed between the creepy neighbour, Dieter Tiberius, and Randolph and his wife, Rebecca. It’s a whydunit of sorts – one of the central mysteries to be resolved is why Randolph’s father, Hermann, has murdered Tiberius – although the mystery itself is something of a red herring: Fear is a novel that is much more invested in exploring the concept of masculinity than playing the kind of guessing game we tend to associate with the whydunit psychological thriller.

It quickly becomes apparent that Kurbjuweit is investigating various interpretations of masculinity, as Randolph discovers that a man is expected to behave in different ways according to the expectations of different people and different generations. Moreover, Randolph is a man who has been conditioned by fear from a very young age. The son of a man obsessed with guns, he grew up in Berlin at the height of the Cold War, living and breathing the threat of imminent extinction. Randolph’s parents, meanwhile, came of age during the second World War, and are themselves children of fear, which may account for the simmering rage which underpins their relationship. “If you walked through the burning city of Cologne as a little girl,” Randolph says of his mother, “heard the bombers, the shells and sirens, knew the smell of burnt human flesh and had to see open wounds and torn limbs, perhaps you feel you have put the worst behind you – that a domestic dispute is a trivial matter.”

Randolph, being a self-professed middle-class liberal, believes that he has rejected all that his parents stand for, including their petit bourgeois hopes and fears. His actions, however, suggest that Randolph, whether by nature or nurture, has inherited the best and worst of his parents’ characteristics, with tragic consequences.

Studded with blackly comic moments – at one point Randolph’s therapist urges him to “trying to see everything so positively” – Fear revels in playing with the genre’s conventions at every turn. Far from being an unreliable narrator, for example, Randolph is an entirely reliable guide, and perhaps even a little too honest to make for comfortable company on the journey. There’s no doubting he loves his wife and children, but Randolph is also very happy in his own company, which means he can come across aloof and remote, and an unusually austere hero, emotionally speaking, when it comes to defending hearth and home. So when Tiberius torments Randolph and Rebecca by accusing them of abusing their children, and subsequently reports them to the police, the reader experiences a frisson of doubt about Randolph’s behaviour behind closed doors, even as Randolph, as any father would, protests his innocence to anyone who will listen.

Beautifully translated by Imogen Taylor, Fear is a complex tale of plausibly conflicting reactions to a prolonged and almost unimaginably stressful living nightmare, a story that invites the reader – a citizen, presumably, as law-abiding as Randolph and Rebecca – to decide for herself how she might behave were she to discover herself in Randolph’s impossible situation. The final twist will likely come as no surprise to fans of the psychological thriller, but otherwise Fear is a complex, nuanced and gripping tale of domestic terror.

Declan Burke is an author and journalist. He is currently Dublin City Council / Unesco writer-in-residence