The shaping of a cross-border book tour 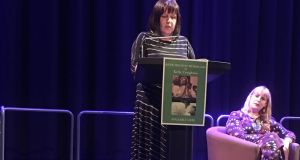 Kelly Creighton: “I believe stories are meant to be told and heard. It adds an important layer to the experience of understanding, for both writer and reader alike”

As directors of a small press we’re always trying to come up with new ways to promote our writers. But it always comes back to the same thing: readings. The more readings we can get our writers the more successful they will be. But then there’s the issue of all the many other writers in Ireland and the competition for festival and literary event slots that is often challenging for a small press, which isn’t helped by the fact that we’re based way out in Connemara.

And so the idea came about to have a Doire Press reading tour. But as we’re strong proponents of writers not only being paid, but also having their travel and accommodation covered, the realistic costs of a tour was something that we simply could not afford, even with Arts Council funding. But last year when the Arts Council of Ireland raised the ceiling of how much funding we could apply for in our funding scheme, we jumped at the opportunity.

About this time last year we were notified that we had received funding to cover both the publication and a tour for two of our upcoming poets, Annemarie Ní Churreáin and David Butler. And so the grand plan for the tour was unveiled. But like all grand plans it would be reshaped, starting with the addition of two Northern writers for whom we later received funding from the Arts Council of Northern Ireland: fiction writer Kelly Creighton and poet Emma McKervey. This addition not only made the tour cross-border, but also cross-genre.

Over the coming months the tour would be further reshaped. But it wasn’t until tour organiser Ruth McKee came up with the title – Intersections: Bodies, Belonging and Borders – that the tour finally seemed truly cast.

“Initially, searching for a unifying thread in such disparate voices was challenging,” says Ruth, “until I realised that each writer engages one way or another with thresholds, whether this is between the seen and the unseen in Emma McKervey’s work or among the trespasses and transfigurations of the body in Annemarie Ní Churreain’s. All four writers engender this hyphen, this border, between ourselves and the other, between the flesh and the spirit.”

Ní Churreáin says her poetry is bound with the body. “The body and how it belongs us to history is very much at the heart of this book,” she says. “Even if I tried, I would not be able to erase the body from my poems, such is the compulsion of it to be acknowledged.”

Belonging is often linked with a sense of identity and the various ways in which we struggle to establish it, which is often at the core of writing. For Emma, a sense of belonging to the North came when she was away at university in England. “I was unprepared for how this place I had been dying to leave for so long, from where I needed to disassociate myself in order to find my own identity, suddenly seemed to be defining me even more.”

The notion of borders takes on different contexts for each of the four writers. Butler recounts his first trip North of the border in the ’80s. “I was a UCD fresher and had begun to go out with a Tyrone girl who’d invited me to visit her family home outside Dungannon,” he recalls. “While stopped at the Border, the bus was boarded by a British soldier even younger than myself who scowled at the passengers in the manner of a rookie school-teacher, all of which might have been hilarious if it wasn’t for the automatic rifle he cradled.”

Reflecting on the current political situation and the very real possibility of the rebuilding of the Border and what that means with regard to poetry, he says, “The logic of Brexit might mean some form of economic border is inevitable; an artistic border is not.”

For Creighton borders takes on more than just the physical divide. “Where we begin and where we have been shapes who we are,” she says. “I’m also interested in the personal relationships that border lives and the divides that occur in long-upheld connections.”

The tour
The tour is imminent now and we’re all starting to get very excited. “Beyond the audiences who, one would hope, might attend the tour,” Butler says, “it’ll be an opportunity for us writers to get to know each other, to appreciate one another’s perspectives, experiences, hopes, concerns.”

Creighton sees readings as a natural next step after publication. “I believe stories are meant to be told and heard. It adds an important layer to the experience of understanding, for both writer and reader alike. After publication, the reading becomes a showcase and a conversation.”

For Ní Churreáin, readings are about connections. “Sound connects the body into the landscape and through space connects the poet and audience. This book tour gives me the chance to connect in a meaningful way with new writers, audiences and landscapes.”

“I hope those who attend the tour readings or purchase my book find some sense of the questions and answers I have been asking regarding self and place,” McKervey says, “and a sense that in between all the borders and bodies there is somewhere to belong.”