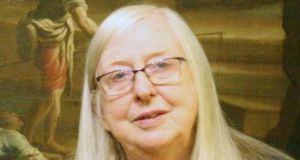 Eiléan Ní Chuilleanáin: “I don’t know what to do with the bottle, I want to do something to suggest that the relationship between poetry and alcohol does not need to be a destructive one. It seems it isn’t in China. Suggestions from the poets of Ireland would be welcome.”

Eiléan Ní Chuilleanáin has been awarded the 1573 International Poetry Award, one of China’s highest literary honours. Usually presented during a ceremony at the International Festival of Poetry and Liquor in Luzhou, Sichuan Province, the prize includes RMB 150,000 (€20,000) and “a made-to-order bottle of 50-year old Baijiu (white liquor) worth €10,000”.

Ní Chuilleanáin, received the Irish Times Poetry Now Award for The Mother House (2019) in March and last month saw the publication of Collected Poems, also published by The Gallery Press.

“It was a delightful surprise of course,” Ní Chuilleanáin said, “but the best thing was the correspondence with the Chinese translator, who had obviously read so carefully and wanted to penetrate the meaning, so that he could find a way of passing it on in Chinese.

“I don’t know what to do with the bottle, I want to do something to suggest that the relationship between poetry and alcohol does not need to be a destructive one. It seems it isn’t in China. Suggestions from the poets of Ireland would be welcome.”

In Weekend Review, Freya McClements talks to Val McDermid as part of an in-depth look at the prospect of Scottish independence. In Ticket, Irish authors write about their favourite books of 2020. Reviews are Matthew O’Toole on Anatomy of a Killing: Life and Death on a Divided Island by Ian Cobain; Kerri ní Dochartaigh on Blue Ticket by Sophie Mackintosh; Rónán Hession on the best new translated fiction; Paschal Donohoe on In Bed with the Blueshirts by Shane Ross; Patrick Freyne on Static by Phil Harrison; Barry Pierce on The First Woman by Jennifer Nansubuga Makumbi; Frank McDonald on Making Belfield: Space and Place at UCD, edited by Ellen Rowley and Finola O’Kane; and Sarah Gilmartin on Medals and Prizes by John Metcalf.

Hamnet by Maggie O’Farrell has been named the Book of the Year 2020 by Waterstones, the UK’s leading high-street bookseller.

O’Farrell said: “I’m over the moon that Hamnet has been chosen as Waterstones’ Book of the Year. It is one of my favourite awards and I make a point of reading the winning book each year. It’s a huge honour to be added to this list, especially as I know that the award is nominated by those most discerning of readers: booksellers. Without their expert guidance and knowledge, my reading shelves would be much the poorer. 2020 has been a strange and challenging year for all of us: what better time to listen to the narratives of others and lose ourselves in a book?”

Waterstones booksellers vote for the title they have most enjoyed recommending to customers over the course of the year. Also shortlisted were Exciting Times by Naoise Dolan and Diary of a Young Naturalist by Dara McAnulty. Last year’s winner was The Boy, the Mole, the Fox and the Horse by Charlie Mackesyand Normal People by Sally Rooney won in 2018. Hamnet has already won the Women’s Prize for Fiction.

The fifth annual TS Eliot lecture, on Eliot and Joyce, will be delivered by Edna O’Brien on her 90th birthday on December 15th.

Owing to Covid-19 restrictions it is not possible to present this year’s event live on the Abbey stage. Instead, it will be recorded at the Irish Embassy in London. The lecture premieres at 7.30pm on the Abbey Theatre’s YouTube channel. Viewing is free. It will be available to watch for one month only.

“I have called my talk The Leap,” O’Brien said, “because in physics, psychology and the arts, the word is used to describe a seizing on strange potencies and potentialities to generate a deeper and more extensive experience. I am alluding particularly to Eliot and Joyce, whom I bring together in the opening paragraph, as both were the endowed messengers whose works Ulysses and The Waste Land will be one hundred years old in 2022.

“Eliot once spoke of a lifetime burning in every moment, not only the lifetime of one man, but of old stones that can’t be deciphered. My hope is that young people might read my few words and be encouraged to read his work and Joyce’s, because the delight and discovery in the leaps they made is incomparable. Their depths are great, and so are their enchantments.”

Kit de Waal has said she is “humbled and overjoyed” to be appointed as the new creative writing writer in residence at University of Limerick.

Prof Joseph O’Connor, the Frank McCourt chair of creative writing at UL, said de Waal was “one of the most exciting and skilful writers of our times”. She takes over from Gavin McCrea, who O’Connor said had made an “extraordinary contribution to our students and I offer him our heartfelt thanks”.

De Waal said: “I have very big boots to fill but can’t wait to become part of such a committed team and vibrant teaching community. Above all, I am looking forward to meeting the students, reading their work and helping them as best I can to become better writers.”

De Waal’s debut novel My Name is Leon won the Kerry Group Irish Novel of the Year 2017 and is being adapted by the BBC. In 2016 she founded the Kit de Waal scholarship at Birkbeck, providing a fully funded place for the MA creative writing to a talented student who otherwise would not be able to afford to participate. It is now in its fifth year. Her second novel, The Trick to Time, was longlisted for The Women’s Prize. Her first YA novel, Becoming Dinah, was shortlisted for the Carnegie Medal. In 2019 she crowdfunded Common People, an anthology of working-class memoir by new and established writers. She co-founded the Primadonna Festival in 2019 and in response to the COVID-19 crisis, she founded the Big Book Weekend, a free virtual literary festival which had an audience of 24,000. Her latest book, a collection of short stories called Supporting Cast, was published in 2020.

Her fellow UL creative writing lecturer Donal Ryan won the Eason Novel of the Year prize at the An Post Irish Book Awards 2020 for Strange Flowers. O’Connor’s Shadowplay won the award in 2019.

The Rick O’Shea Book Club Xmas Festival 2020 is being run December 14th to 17th, all live at 8pm, by RTÉ Book Show presenter Rick O’Shea in association with his own online book club of over 35,000 members.

On Monday 14th, The Poetry Event features Rick joined by Sarah Clancy, Martin Dyar and Chandrika Narayanan-Mohan reading from their own work of 2020 and the work of people they love.

On Wednesday 16th, Rick hosts The Book Quiz and on Thursday 17th The Xmas Party with Donal Ryan, Doireann Ní Ghríofa, Liz Nugent and Colm O’Regan. All events are free, all will be simulcast in The Rick O’Shea Book Club group in Facebook and on the Shelf Analysis YouTube channel.

John Hume in America: From Derry to DCby Maurice Fitzpatrick (University of Notre Dame Press) has made the list of 2020 Choice Outstanding Academic Titles chosen by the Choice editorial staff from over 3,500 titles reviewed by Choice during the past year. Fitzpatrick’s book traces Hume’s philosophy of non-violence during the civil rights movement to his indispensable work with allies in the United States towards the creation of a new political framework in Northern Ireland.

Angela Byrne has been awarded a silver prize in the memoir section of the American Eagle Book awards for her book on an irish emigrant family, Not Forgotten, and an honourable mention for her other book, Ms Fitzgerald.

The Commissioner of Irish Lights has launched The Lighthouse Storybook, a collection of stories written by children as part of the Young Storykeepers Project. All proceeds directly support the work of Children in Hospital Ireland and the Northern Ireland Hospice.

Yvonne Shields O’Connor, chief executive of Commissioners of Irish Lights, said, “I love this wonderful storybook, which is a selection from many original stories, poems and illustrations that were submitted by young writers aged 7-12 years from every corner of the island of Ireland and beyond For hundreds of years, lighthouses have kept seafarers safe, helping them find their way with a guiding light and safe journey so it is right that we support this wonderful organisation who help children navigate through their time in hospital.”

People wishing to purchase the book can visit the website.

To celebrate the success of Break the Mould, her new book for children, internationally-recognised advocate and author Sinéad Burke will be joined by actor Colin Farrell in a special online event for all the family, in collaboration with Fane, live online at 5.30pm on December 4th. Details here.