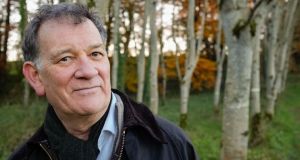 Carlo Gébler: fired up by the idea of presenting the Decameron to today’s readers

In a villa high above Florence a group of seven women and three men are cocooning, seeking shelter from the epidemic, scared by reports of death coming nearer to their own doorstep by the day. Sounds familiar?

One fitful night in mid-March, when the Covid lockdown was at its most severe, I lay awake, remembering a summer in 1974 and my visit to a friend who was studying Italian in Florence at the time. During the obligatory trip to the hilltop town of Fiesole she casually mentioned that this was also the venue of Boccaccio’s Decameron.

Decades later, as I lay awake wondering and worrying how our publishing business New Island would endure, it struck me that two books had re-entered bestseller listings during the early days of the pandemic: Albert Camus’ The Plague and Boccaccio’s masterpiece.

The next morning, I picked up my copy of the Decameron and scribbled some tongue-in-cheek cover text for a putative retelling of this most timely of books:

In a villa high above Florence a group of seven women and three men are cocooning…At once bawdy, witty, tragic and ever topical, these stories demonstrate how great literature survives a fast-forward to our century and similar challenges.

But how to go about reinterpreting the Decameron for a modern readership? And who best to help? I have always admired Carlo Gébler’s ability to relate to classical literature and “translate” it for a modern readership. His re-telling of Aesop’s Fables managed to bring back these tales to what was their message right from the beginning: a survival manual for slaves, driven by brutal and disconcerting logic.

Like myself, Carlo was fired up by the idea of presenting the Decameron to today’s readers. Together, we succeeded in selecting – from the original 100 tales in Boccaccio’s book – 28 stories that would appeal to a contemporary audience through their modernity, radicalism and topicality.

Carlo settled into the heavy lifting, starting with a merged version of his and Boccaccio’s introduction but opting for a much more dialogue-driven rendering of the body text and culling the historically driven “narrative undergrowth” fashionable at the time. His brief was to pare down the stories, letting the pure diamond shine without its setting, so to speak, in order to convey simply the core intentions of the original Decameron. Carlo told me at the end of a particularly intense day that he felt “as if Boccaccio were looking over his shoulder and thought that he might approve of the writing”.

But how best to dress this contemporary iteration of a classical text. How to span the centuries and suggest the timeless and the timely? My colleague searched through image banks and found a stark and atmospheric Edward Hopper-esque image. A lone woman dressed in blue and arced in a clear light is looking out of a window – presumably onto a calamity-ridden Florence, where six out of 10 of its citizens perished during the plague.

We also went back to the 1492 Venetian edition of the book and scanned the original delicate woodcut images, published soon after the invention of the printing press. Their intricate detail adds historical heft to our contemporary version.

Finally, what to call this new editon, this contemporary re-imagining of one of literature’s primary sources? My friend and fellow publisher Dermot Bolger came up with the book’s title, Tales We Tell Ourselves, in exchange for a 10 per cent take of Japanese film rights.

As the new version was taking shape we came across an ingenious quote in the New York Times where writer Rivka Galchen sums up the essence of the book:

Memento mori – remember that you must die – is a worthy and necessary message for ordinary times, when you might forget.

Memento vivere – remember that you must live – is the message of The Decameron.

There is not much one can add a to description of the book which, over 700 years, had established itself as a form of literary self-therapy. This is a text for troubled times, which will continue to resonate and provide solace for years, if not decades to come.

Edwin Higel is publisher at New Island. Tales We Tell Ourselves is out now