Paul Gosling, editor of Lessons from the Troubles and the Unsettled Peace, hears from peole on the front line 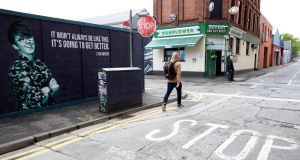 The hopeful words of Lyra McKee, who was shot dead by dissident republicans in Derry

Are we there yet? Sadly, tragically, when it comes to the Northern Ireland peace process the honest answer is no. “Nobody wants to hear that it’s a 50-year job, but that’s maybe at the low end of the scale.” Those words from one of the North’s most senior former politicians – Simon Hamilton, who has been finance, economy and health minister at Stormont – should be listened to.

Nor is Hamilton alone. “We are in a peace process that will last at least 50 years,” says Peter Osborne, former chair of the Parades Commission and the Community Relations Council. “It almost feels like we’re taking the peace process for granted,” adds former Stormont justice minister, Claire Sugden.

And if that is not enough, take a look at the murals spread across the North’s cities. “Salute the men and women of violence,” says one in Derry’s Bogside, authored by Saoradh, associated with the New IRA, which murdered journalist Lyra McKee last year when trying to kill a PSNI officer.

So this is a good moment to reflect on progress, almost mid-way through the peace process from the point at which the Belfast Agreement was signed, in 1998. Lessons from the Troubles and the Unsettled Peace contains reflections and suggestions from 35 leading politicians, civic society leaders and writers from the North and the South on what needs to be done to create a more settled society, removed from the risk of returning to conflict.

A warning comes from Conal McFeely, chief executive of perhaps the North’s most successful social enterprise, Creggan Enterprises. He argues that many of the conditions that led to civil rights demands and ultimately the Troubles persist to this day – discrimination and lack of opportunity. But this is based around class, poverty and geography, not religion. As author Julieann Campbell observes: “There was a lot more to the Troubles than just Catholic and Protestant.”

Indeed, for a region regarded as divided by religion it is striking how similar the comments are from all parts of the community. Sophie Long, a former press officer for the loyalist Progressive Unionist Party, comments: “We should have effective policies, which we don’t have.... how do you demonstrate to local communities, where you have unemployment as pronounced as 50 years ago, where there are levels of poverty and deprivation, lack of social housing. The jobs that are coming are not reaching them.”

One of the great disappointments of Northern Ireland politics is that the peace dividend widely expected to flow from the Good Friday Agreement has not yet arrived. In fact, it was delivered for the Republic, just not for the North. Fr Martin Magill, who officiated at the emotional funeral Mass for Lyra McKee, explains what has been achieved has limited value unless there are benefits going to “the Creggan, West Belfast, the Lower Newtownards Road, the Shankill”. It remains the case that it is the most impoverished working-class estates in which both republican and loyalist paramilitaries recruit.

But if there are continuing problems there are also solutions. Many of the interviewees talk of the opportunities presented by citizens’ assemblies, learning from Ireland’s experience discussing same sex marriage, abortion and climate change. Traditional forms of public engagement and decision-making are not enough, says chief executive of the Community Foundation Northern Ireland, Andrew McCracken. “The current mechanisms for democracy that we have aren’t all the tools that we need.”

Citizens’ assemblies may be suitable not only to address whole system problems, but also more localised challenges. Peter Sheridan, chief executive of Co-operation Ireland and formerly the most senior Catholic officer in the RUC and the PSNI, suggests assemblies might be used in a deprived estate for local residents to consider how to persuade teenagers not to engage with paramilitaries. Linda Ervine, who teaches the Irish language at a community centre in loyalist east Belfast, believes they could be used to bring together residents on the two sides of Belfast’s notorious peace walls.

Former archbishop of Armagh, Lord Robin Eames, prefers the term “people’s assembly” and hopes they could enable the population to come together across the divide to understand better how similar their lives are, and address what they themselves regard as their worst problems. He explains: “The people that talk to me have a tremendous degree of frustration over the lack of representation and understanding in the media of what really concerns them in everyday life.”

Denis Bradley – who with Robin Eames co-chaired the Consultative Committee on the Past – is convinced that “our problem at the moment is that we don’t know where we’re going”. This makes planning difficult, or even impossible. But while this can constrain decision-making, it creates an opportunity to talk and think, he argues. A similar point is made by Senator Mark Daly – Cathaoirleach of the Senate and formerly chair of the Oireachtas Good Friday Implementation Committee – who says “the debate that needs to happen is the debate between people with ideas”.

The over-riding anxiety is whether that debate can take place without triggering communal tension – as has already happened with Brexit – and whether that tension escalates into violence, as some paramilitaries would like it to. But the debate is more complex than merely the constitutional future of the North.

Observations from the interviewees stress that whatever the long-term constitutional settlement there are deep seated weaknesses in northern society that must be addressed. These range from the large number of working-class children who leave school without good exam passes and career options; to the continuing separation of housing and education based on religion; to the often inefficient and ineffective administration of government.

Suggestions from people who have been at the heart of government and civic society in the North can play an important role in charting the future – whatever that may be.
Lessons from the Troubles and the Unsettled Peace is edited by Paul Gosling and published by the Holywell Trust, a peace and reconciliation charity, with funding from the Community Relations Council of Northern Ireland and Ireland’s Department of Foreign Affairs. Copies of the book are available from the Holywell Trust, holywelltrust.com.