‘We thought each child’s death would change things, but life went on – 50 years of killing children’ 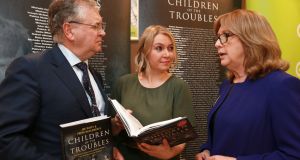 Joe Duffy and Freya McClements, authors of Children of the Troubles, with former president Mary McAleese at the launch of the book at Eason in Dublin. Photograph: Laura Hutton

It was August 14th, 1969. I was 18 and the A-level results were just out. Our Dublin-born parish priest took my friend Eileen and me out to dinner to celebrate our acceptance into university for ours was a parish with 70 per cent unemployment and there was hope in the bright futures that seemed to lie ahead of us. We set off for the Woodburn House Hotel at seven and while we were gone all hell broke loose in the parish we had left and the genie of sectarian violence was well and truly out of the bottle.

In 1969 when people were planning to travel to the moon, Northern Ireland was being dragged back into a vortex of violence that spread like a Mexican wave in that fateful August and on that fateful night in Ardoyne. Loyalist gangs backed by police officers in uniform attacked Catholic houses. Thirty homes were burnt out that night. Eileen and Fr Honorius and I arrived back to bedlam. It was a scene straight from Dante’s inferno.

Next morning the place was alive with stories of the events of the night before. One has always stayed with me – the story of a young woman named Alice, a young married pregnant woman who was beaten by a uniformed police officer at her own door. She miscarried the baby.

Meanwhile a short distance away a nine-year-old child, Patrick Rooney, safe you might have thought in his own home, was shot in the head by police who later denied they had fired the lethal bullets. So often the deaths of children were accompanied by an impenetrable tissue of lies whether from officialdom or paramilitaries.

Patrick’s is the first story in Joe and Freya’s tragic and terrible series of stories of the children who were victims of the Troubles. They are stories that need to be told, and remembered but dear God it is so hard to read them for the savage deaths of these overlooked children let loose miseries that accompanied those who loved them for the rest of their lives, miseries that changed the course of history – mostly not for the better – but occasionally miraculously provoking the truth and the human solidarity that alone feeds decent, egalitarian societies.

The loss of Alice’s unborn baby was not the end of her story. Four years later her husband was shot dead in his front garden by soldiers who later claimed falsely that he was armed. Patrick’s aunt and cousin were murdered by loyalists several years later. To talk of closure when confronted by these stories is meaningless. At least 186 children, from families of all politics and religions and backgrounds, died violent deaths on this island and in Great Britain thanks to the catalogue of failures of adults who could have turned the tide of history’s lethal hatreds but did not do so in time to prevent the waste of these little lives.

Often it was the incomprehension and grief of their parents that forced people out of their separate bunkers and allowed us to glimpse the common humanity that eventually was forged into a peace process. Who could forget the avalanche of shared grief for the deaths of Stephen Parker, or Maria McGurk, killed along with her mother in McGurk’s bar, or the three Maguire children, or Tim Parry or Majella O’Hare – all little innocent children full of wonder and full of life and doing such simple everyday things when the toxins of a history they did not understand poured its acid rain on them and disintegrated their beautiful lives. We thought each child’s death would change things, soften hardened hearts, would never be forgotten but life went on inexorably and these little lives, these lovely lives were consigned to the recesses of memory except by those who had to face their absence night and day.

Fifty years of killing children. Children killed by paramilitaries, by uniformed police and army, by thugs, by so-called accident, by design, overlooked collateral damage. Joe and Freya have honoured them, respected them and deeply loved them in this book.

It is hard to read but we need to read it to remind ourselves over and over and over of the outrageous cost of this peace we enjoy, that it is priceless, that it is as vulnerable as these children were and we have to protect and defend it for them and the innocent children of today who are entitled to have their lives sustained by peace and not interrupted permanently by the death culture of conflict.

Let their stories be heard in Westminster, especially this week, for dead though they are, these children’s lives are invested in the Good Friday Agreement and in all the good it has wrought, all the deaths it has avoided, all the healthy relationships it has promoted and all the stable future it has let in. We hope their memory will help the reality check and the compromise needed at this time of intense dialogue between the UK and the EU, which we pray will become an agreement that will hold.

There are almost 4,000 entries and many of those who died left behind bewildered and bereft children. I think in a special way of the little daughter of Olive McConnell. The child lived but her mother died in a loyalist car bomb designed to kill my father in October 1972.

We think of them tonight and hope that in this powerful telling of the stories of the children who died, the bereaved children who lived with grief, the bereaved parents and siblings who lived with unquenchable loss, will know that their pain and the craven waste of days that could have been and should have been happy, is the fuel that powers us to preserve the peace, to insist on fidelity to the Good Friday Agreement with its founding principle of parity of esteem.

The agreement was overwhelmingly endorsed by the people of all faiths and politics who share this island North and South in twin referenda in May 1998. I have no doubt that many of those who ticked that box with its resounding yes to partnership and peace, that allowed a new and beautiful grace to flow and flood, did so for the children.

That is what Joe and Freya have done, flooded our thinking again with a reminder of what we owe these children, a debt that can never be repaid. Well done. If ever there was a labour of love then this is it. If ever there was a timely telling, this is it.
Former Irish president Mary McAleese was speaking last night at the Dublin launch of Children of the Troubles (Hachette) by Joe Duffy and Freya McClements at Eason’s on O’Connell Street