Don’t drink, sleep when you want, get a cat: top 10 writers’ tips on writing

Think you still have that novel in you? Take some writing tips from Leo Tolstoy, Muriel Spark, John Steinbeck and other famous authors 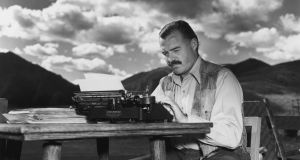 Over the past year, Helen Gordon and I have been putting together Being a Writer, a collection of musings, tips and essays from some of our favourite authors about the business of writing, ranging from the time of Samuel Johnson and Grub Street, to the age of Silicon Roundabout and Lorrie Moore.

Researching the book, it quickly became obvious that there isn’t a correct way to set about writing creatively, which is a liberating thought. For every novelist who needs to isolate themselves in a quiet office (Jonathan Franzen), there’s another who works best at the local coffee shop (Rivka Galchen) or who struggles to snatch an hour between chores and children (a young Alice Munro).

Conversely, it also became apparent that alongside all this variety of approach, there are certain ideas and pieces of advice that many writers hold in common. In an 1866 letter to Mrs Brookfield, Charles Dickens suggests that: “You constantly hurry your narrative ... by telling it, in a sort of impetuous breathless way, in your own person, when the people [characters] should tell it and act it for themselves.” Basically: show don’t tell. Three words that will be familiar to anyone who has sat in a 21st-century creative writing class.

Our book therefore contains a lot of writing advice, ranging from the sternly practical to the gloriously idiosyncratic. We have writers talking about what went wrong, as well as what went right. They discuss failing to finish a manuscript, failing to find a publisher, badly realised characters and tortuous, unwieldy plots. Here are a just few of our favourite tips, which we believe any aspiring writer should take to heart.

Hilary Mantel: a little arrogance can be a great help
“The most helpful quality a writer can cultivate is self-confidence – arrogance, if you can manage it. You write to impose yourself on the world, and you have to believe in your own ability when the world shows no sign of agreeing with you.”

Leo Tolstoy and HP Lovecraft: pick the hours that work best for you
Tolstoy believed in starting first thing: “I always write in the morning. I was pleased to hear lately that Rousseau, too, after he got up in the morning, went for a short walk and sat down to work. In the morning one’s head is particularly fresh. The best thoughts most often come in the morning after waking while still in bed or during the walk.”

Or stay up late as HP Lovecraft did: “At night, when the objective world has slunk back into its cavern and left dreamers to their own, there come inspirations and capabilities impossible at any less magical and quiet hour. No one knows whether or not he is a writer unless he has tried writing at night.”

William Faulkner: read to write
“Read, read, read everything – trash, classics, good and bad, and see how they do it. Just like a carpenter who works as an apprentice and studies the master. Read! You’ll absorb it. Then write. If it is good, you’ll find out. If it’s not, throw it out the window.”

Katherine Mansfield: writing anything is better than nothing
“Looking back I imagine I was always writing. Twaddle it was too. But better far write twaddle or anything, anything, than nothing at all.”

Ernest Hemingway: stop while the going is good
“Always stop while you are going good and don’t worry about it until you start to write the next day. That way your subconscious will work on it all the time. But if you think about it consciously or worry bout it you will kill it and your brain will be tired before you start.”

John Steinbeck: take it a page at a time
“Abandon the idea that you are ever going to finish. Lose track of the 400 pages and write just one page for each day. It helps.”

Miranda July: don’t worry about the bad drafts
“I was a lot dumber when I was writing the novel. I felt like worse of a writer … would come home every day from my office and say, ‘Well, I still really like the story, I just wish it was better written.’ At that point, I didn’t realise I was writing a first draft. And the first draft was the hardest part. From there, it was comparatively easy. It was like I had some Play-Doh to work with and could just keep working with it – doing a million drafts and things changing radically and characters appearing and disappearing and solving mysteries: Why is this thing here? Should I just take that away? And then realising, no, that is there, in fact, because that is the key to this. I love that sort of detective work, keeping the faith alive until all the questions have been sleuthed out.”

F Scott Fitzgerald: don’t write and drink
“It has become increasingly plain to me that the very excellent organisation of a long book or the finest perceptions and judgment in time of revision do not go well with liquor. A short story can be written on the bottle, but for a novel you need the mental speed that enables you to keep the whole pattern inside your head and ruthlessly sacrifice the sideshows … I would give anything if I hadn’t written Part III of Tender Is the Night entirely on stimulant.”

Zadie Smith: get offline
“Work on a computer that is disconnected from the internet.”

Muriel Spark* : get a cat
“If you want to concentrate deeply on some problem, and especially on some piece of writing or paper-work, you should acquire a cat. Alone with the cat in the room where you work … the cat will invariably get up on your desk and settle under the desk lamp. The light from a lamp … gives the cat great satisfaction. The cat will settle down and be serene, with a serenity that passes all understanding. And the tranquillity of the cat will gradually come to affect you, sitting there at your desk, so that all the excitable qualities that impeded your concentration compose themselves and give your mind back the self-command it has lost. You need not watch the cat all the time. Its presence alone is enough. The effect of a cat on your concentration is remarkable, and very mysterious.’ *(or rather, the character of Mrs Hawkins in A Far Cry from Kensington.)