David Bailey: ‘I always thought the Sixties was a small group of people’

The celebrated fashion photographer on his muses, the Krays and his new memoir 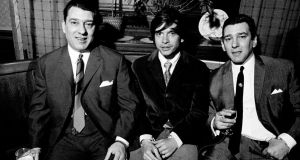 David Bailey with Ronnie and Reggie Kray – “I could never get any assistants to come when I was with the Krays.” Photograph: David Bailey

The walls of David Bailey’s studio are replete with some of his most famous shots. Kate Moss with her hair backcombed into a frenzy. Penelope Tree posing as Mickey Mouse. The Krays looking as if they’re modelling Tom Ford. And Bailey’s wonderfully strange 1968 portrait of the Rolling Stones, featuring Mick biting down on a dagger and Brian Jones holding a glass of red wine in one hand and a garden fork in the other.

Everything in the studio is guarded under the watchful eye of Mortimer, an impeccably groomed chow who moves around the place like a sentient ottoman. I’m in Bailey’s studio to discuss his life, career and his new memoir, Look Again.

After a few innocuous questions about lockdown – “Every day’s Boxing Day,” he says. “It’s been six months of Boxing Day” – we somehow segue into the recent Vogue cover, which featured the footballer Marcus Rashford and supermodel Adwoa Aboah in moody monochrome with the strapline Activism Now.

Despite being widely lauded, Bailey has his qualms. “I couldn’t believe that cover, it’s so depressing. It looks like Keep Death off the Road.” By his own estimation, Bailey has done about 300 covers for Vogue. So if anyone is qualified to have an opinion, it’s him.

Look Again is a fascinating memoir. Bailey is dyslexic, a disorder that had him put in the “silly class” in school but is what ultimately led his wholly visual brain to photography. The book is co-written with James Fox, the journalist who also co-wrote Keith Richards’s memoir Life. It was this that led Bailey to choose Fox: “Cos he wrote Keith’s book and I was like, s**t if he can do Keith. . . cos Keith’s a really intelligent geezer, probably the most intelligent out of all the Stones. I mean, not [as] streetwise as Mick about money but he knows a bit more about existentialism and stuff.”

I praised how well the memoir distils Bailey’s own voice, the whole thing perfectly capturing his intonation and East End idioms, his coarseness and his wit. “Well, that’s what publishers like, don’t they?,” he says. “It’s funny, that’s all they talk about, ‘Oh, he captured the voice!’ What voice? Barbra Streisand?”

The book is an interesting mix of straight memoir and interviews, conducted by Fox, with some of the main players of Bailey’s career – Jean Shrimpton, Penelope Tree, Catherine Deneuve, Manolo Blahnik and more.

It’s quite daunting to know where to begin with Bailey. He’s one of those cultural icons who truly met everyone and has about 10 stories about each of them. I started with how he began in Vogue.

“It was the art director was good, a gay guy called John Parsons, and I think that’s how I got into Vogue. He was an outsider because it was against the law to be gay then and so I suppose he saw me as being an outsider too, being from the East End, cos I don’t think I would’ve got into Vogue with my accent.”

Bailey’s stories of Vogue in the early 1960s often focus on what an establishment it still was. “There used to be girls I liked as models but they’d say have you listened to her accent? I said yeah, she talks like me so they said we can’t possibly have her in Vogue, suppose she does an interview with that accent? It was really snobby.”

It wasn’t until Bailey teamed up with the model Jean Shrimpton, both publicly and privately, that things began to change at Vogue. Before Bailey and Shrimpton, models were just something to display outfits upon, glorified mannequins in stiff old Dior or Balmain. Bailey rewrote the rule book by turning the focus on the models themselves, paving the way for the concept of the supermodel and establishing Shrimpton as the first true international superstar model.

More than half a century later and their friendship has never faltered: “I know Jean so well, I still see her, we’re still friends. She’s much happier now than she’s been forever, I think. She’s quite amusing again. Because she went through a lot of depression I think, must be awful being the most beautiful girl in the world and one day you’re not doing it any more, the phone stops ringing.”

Penelope Tree, another of Bailey’s great muses, experienced a similar downfall. For me, Tree epitomises the 1960s more than any other model. To look at her is to view a completely different species; nothing about Tree gives any indication that she is of this planet. Bailey shares my adulation.

“She’s the most intelligent of any model or almost any woman I’ve ever met,” he says, “she’s up there with Isak Dinesen or Diana Vreeland. You don’t want to get on the wrong side of her though. I still see her all the time too.” Bailey assures me that he still gets along with most of his girlfriends.

Bailey has never been just a fashion photographer. Starting with his infamous Box of Pin-Ups book in 1965, he established himself as the great chronicler of celebrity culture. To be famous is to have David Bailey take your picture. But despite publishing more than 40 photography books in almost 50 years, Bailey will always be synonymous with the 1960s, his pictures helping define the spirit and aesthetic of the decade.

Yet his view of the decade, and his central role in it, is far from nostalgic. In the memoir he says: “I always thought the ’60s was a small group of people.” The line jumped out at me; it’s the analysis of an ardent realist and a quote that I asked him to discuss more.

“Yeah, it was like 2,000 people in London really, it wasn’t very good if you were a coal miner was it, or a silk worker up in the north or a fabric maker . . . I never went down the King’s Road, I hated the King’s Road, I always thought it was fake.”

Not that there would have been much down the King’s Road that would have interested Bailey, as he says – “I never really liked parties that much.” This is surprising to hear, considering his status as such an ardent playboy. He says he prefers to just sit in the corner during grand soirees. “I can’t do small talk, I find it really difficult to do small talk. People bring out their wallet to show me their kids. I say don’t show me them unless they got webbed feet. I won’t be that interested.”

Conversation turns, as conversation with Bailey always eventually will, to the Krays. It’s hard now to understand the phenomenon of the Krays brothers. They were celebrity gangsters, glamorous murderers. Bailey’s East End charm won them over and the result was some of his most iconic images, images that ndoubtedly helped cultivate a cult of celebrity around the twins. Bailey’s stories about the Krays are, unsurprisingly, insane.

“I could never get any assistants to come when I was with the Krays,” he says, “then some little bloke from Vogue he said ‘I’ll come’, I don’t think he knew who they were. He was holding my camera taking the film and Ron came over and he put his hand on John’s shoulder, John Swannell he was, and Ron said ‘He’s mine for the night’and John dropped the f**king camera. So that was the last time he came.”

Then Bailey, casual as anything, says, “They did somebody in that night too in front of us and I think for John, that was his big lesson.”

When we are in full flow of conversation, I simply  throw a name at Bailey and he will rattle off any great line about them, as if I am tossing fresh fish into the open mouth of a grateful seal.

Rudolf Nureyev: “He was full of himself. Everything revolved around him and you had to worship him. Always surrounded by rich women.”

Andy Warhol: “He used to ask me strange questions. Once he said to me, ‘Do you ever think about the people who made buttons and what happened to them?’ There’s no answer to that question!”

Cecil Beaton: “I thought he was such a snob. I mean, I think he was a great artist, as a designer, and if he had done nothing more than My Fair Lady, that would have been enough. His pictures are great.”

I finish up my hour with Bailey by asking about his future. “I haven’t got much future left now. No, not really. I’ll be 83 soon. I suppose I’ll live to 95 or 98 or something like that.”

But Bailey really shows no signs of stopping. He shot a cover for the August issue of British Vogue. At the beginning of September he opened a show  in London dedicated to his oil paintings. And now he has published his memoir.

He asks me earnestly if I think people will like the book. I answer him positively and truthfully. He seems content. Look Again is one of Bailey’s finest portraits yet.