The People, No: A Brief History of Anti-Populism: Prose a joy but too facile 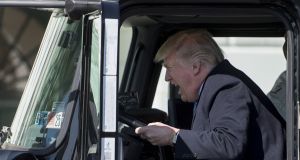 The majority on the US left “posits that a scurrilous TV billionaire pandered to the bigotry of millions”. Photograph: Jim Watson/AFP via Getty Images

Book Title:
The People, No: A Brief History of Anti-Populism

On the American left there are two schools on the 2016 United States election. The majoritarian one posits that a scurrilous TV billionaire pandered to the bigotry of millions; the minority opinion ventures that, in his unerring demagogy, the scurrilous TV billionaire alighted on some substantive issues – notably elite misrule and its attendant insults: deindustrialisation, asinine wars, ruinous trade deals and the opioid crisis, all of genuine concern to people and which had gone unaddressed in the political marketplace. Sure, many held unenlightened views on immigration but en masse they were not principally motivated by them.

The implications of these perspectives are consequential. If you adhere to the former, 2016 was an aberration; you can’t in good conscience parley with das volk; and as for the political ground staked out – but not delivered on – by that demagogue, though much of it comports with traditional left orthodoxy, it’s defiled in his undersized paws and dead to you.

The priority is restoring the rightful sovereignty of dispassionate experts administering the neoliberal system, even if this entails drafting a senescent 78 year old. If you’re among the heterodox latter, however, 2016 held a lesson, the electorate sent a signal we fail to heed at our peril. Among the leading lights of this “economic anxiety” thesis is Thomas Frank.

In The People, No, Frank unspools a spirited sociocultural history and historiography of populism, from the eponymous germinal movement of 1890s agrarian rabble-rousers through common-touch new deal eggheads to Martin Luther King’s “economic justice” campaigns.

But 19th-century “pops” and 1930s sirens of the people seem remote from today’s fissiparous US. More revelatory is the countervailing impulse: anti-populism. Here, Frank traces a bizarre genealogy. We have little difficulty disposing of early specimens – cigar-chomping plutocrats – as forces of reaction. But today’s pantsuit-clad progressive apparatchiks or wonky business-casual academics holding forth on the menace posed by populism in breakout sessions on the NGO conference circuit and TED stage, their insistently reasonable tones amplified by cyborg-style headsets between plashes of applause, are nothing so brazen or gauche.

Clinically dissecting the hordes’ pathologies, replete with high-rent concepts such as “status anxiety” and “trope”, the impression is of a “disinterested literature of social science”. Could they possibly belong to the same genus as those hoary defenders of sectional interest?

Somewhere along the way a reactionary doctrine got laundered into governing-class wisdom. The “missing link”, Frank avers, is a trio of mid-20th century intellectuals who, collectively, “retrieved pieces of a long-forgotten conservative stereotype, tricked them out with . . . fashionable academic jargon . . . and launched the result as a shiny new diagnosis handed down by the well-adjusted administrative mind”.

Still, it performed the same political work: “rationalising the power of the powerful”. Shot through with self-importance and technocratic conceit yet edged with angst over the spectre of McCarthyism – faux-populism conflated with the real thing, writes Frank – the lower orders were not merely inept but “sinister”.

Yet the argument was sloppy, rooted in exigency and prejudice. Historian Richard Hofstadter’s revisionist recasting of populism as “the fountainhead of American anti-Semitism” stuck it to a previous generation of unduly rheumy-eyed historians but was debunked. Sociologists Edward Shils and Seymour Martin Lipset’s assessments are similarly “intuitive” and unfounded. No matter; they’ve bequeathed an intellectual patrimony to today’s commentariat: a narrative of shiftless, lumpen downwardly-mobile proles, seething with ressentiment, ears cocked for dog-whistles, pining for strongmen – dupes of Hofstadter’s “paranoid style in American politics”.

In this telling, today’s boutique liberals appear no less prone to motivated reasoning and just as much historical actors with class interests of their own. Part of this history is the 1960s rupture within liberal ranks when radical students seeking solidarity with white workers recoiled at their hard-hat fellow travellers’ petit-bourgeois views, shifting their allegiance to a more amorphous and abstract category – more susceptible to instrumentalisation for the cause – “oppressed peoples of the world”.

Frank notes the implicit class-conscious homophily between university administrators and student protesters, contending across the ramparts but concurring that “Working-class whites were reactionary and authoritarian”.

One can find fault with Frank’s analysis. His prose is a joy but is he too facile, overly simple-folkish even? He misses the misanthropic strain in early progressivism – Woodrow Wilson excoriating the peanut gallery as “a clumsy nuisance, a rustic handling delicate machinery”. Perhaps he idealises common humanity. Still, he’s also pragmatic, mapping a path to power.

The vanguard of today’s left has its sights trained on the far egalitarian horizon but it might consider historical wisdom – civil rights organiser Bayard Rustin’s counsel to find common cause with working-class whites on economic matters away from cultural flashpoints; or the “ideological patience” extolled by radical historian Lawrence Goodwyn, allowing for evolution in attitudes or, where they don’t infringe on others’ wellbeing, even tolerating “retrograde” beliefs within a plurality of values.

This is antithetical to cancel culture. Thus, Frank butts up against a question of our time: can the left get over itself?