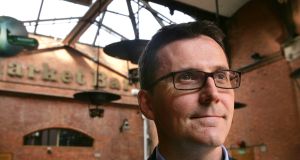 William Ryan: “A House of Ghosts” is deftly set in an war-weary England when spiritualism flourished among the bereaved. Photograph : Matt Kavanagh

It’s the most wonderful time of the year, when the dark clouds between this world and the next disperse and troubled souls walk abroad: what better way to appease the dead than with a first-rate haunted house mystery? WC Ryan’s pitch-perfect A House of Ghosts (Zaiffre, £12.99) takes place at Blackwater Abbey, Lord Highmount’s country estate on an island off the Devon Coast. It’s 1917, Highmount has lost two sons on the Western Front and he and his wife have convened a spiritualist gathering in the hope of contacting them. Formerly a monastery, the Abbey is a Tudor manor house well supplied with sealed rooms, secret passages and chandeliers decorated with ormolu dragons and snakes; the wind beats up a storm that renders the seas impassable; and an uninvited man on the island appears bent on bloody revenge. As you might expect from the author of four acclaimed works of historical crime fiction written as William Ryan, A House of Ghosts is deftly set in an war-weary England when spiritualism flourished among the bereaved. There is a charismatic medium of exotic provenance and dubious powers, a raffish soldier of uncertain reputation and a whiff of scandal surrounding morally compromised arms magnate Lord Highmount (hat tips to All My Sons and An Inspector Calls). But what makes the book stand out are its two leads: Donovan, a battle-scarred Irishman withdrawn from the front to work for the Secret Intelligence Service, whose nationality compromises his loyalties, and his fellow SIS operative, grey-eyed Kate Cartwright, who not only possesses more than her fair share of wit, spirit and gumption; she can see dead people. “The dead thronged the quay, as they did in every fishing port she’d ever been to. Drowned men.” A House of Ghosts is an intelligent, absorbing, exquisitely spooky mystery that left this reader hoping to see a great more of Cartwright and Donovan, in whatever form of future partnership they might favour.

Big houses and islands and ghosts abound in Murder at Greysbridge (Constable, £13.99), the fourth in Andrea Carter’s highly enjoyable Donegal-set series. When solicitor Ben O’Keefe arrives for her friend Leah’s wedding at Greysbridge Hotel, she’s not entirely sure she likes the sinister-looking limestone villa with east and west wings and a covered footbridge protruding from the right gable and vanishing into a rhododendron-clogged annex. The house is full of noises, sounds and strange sights. The groom’s people, islanders from nearby Inishathair, are said to be unwelcoming and clannish, although when we meet the formidable Auntie Belva, their gorgon queen, she is as monstrously delightful as any Wodehouse aunt, and later proves capable of whipping up three pots of stew on a storm-tossed island during a blackout. When two guests unconnected to the wedding meet their deaths, Ben finds herself once again at the centre of a murder case – and once again paired with her now estranged boyfriend, the newly returned Sgt Molloy. Carter skillfully blends a tragic family plot of unwanted pregnancy and a disinherited daughter with the semi-organised crime of diesel-laundering to make a gripping mystery; the climax of the novel, with Ben and Molloy stranded on Inishathair in the storm, is an atmospheric tour de force.

To paraphrase another monstrous aunt, Anthony Horowitz seems to be living entirely for pleasure now; such is the only conclusion one can draw from The Sentence is Death (Century, €16.99), the second entry in his Detective Hawthorne series, where Hawthorne’s Watson is Anthony Horowitz himself. Whether he is fretting about his Foyle’s War rewrites, getting barred from Daunt’s booksellers for shoplifting (“I’m very sorry, Anthony, I don’t think we’ll be stocking you after this.”) or cancelling his hot ticket at the National Theatre to attend a bookclub whose members mistake him for Eoin Colfer before proceeding to ignore him, Horowitz the writer is evidently having a great deal of fun at the expense of his mimsy, Pooterish avatar. There’s a simple moment early on that encapsulates the game being played, when Hawthorne is admitted to the building where a murder has been committed. “I smiled vaguely, nervous that I would be stopped, but the policeman seemed to be expecting me. I went in.” Of course he was; of course he did: like any good author, his job, peevish and resentful though it makes him, is to follow his detective around.

Literary satire, meta-fictional tricks: the only element that doesn’t work quite so well here is the murder mystery – I guessed the culprit’s identity pretty much immediately, and I did my best not to – but there is more than one mysterious death to clear up, and it is in exploring the inciting sins of the fathers that the dark, embittered heart of this novel poignantly surfaces.

Sarah Weinman is the editor of a volume of short stories, Troubled Daughters, Twisted Wives, and two Library of America anthologies devoted to women crime writers from the 1940s and 1950s, the so-called trailblazers of domestic suspense. The Real Lolita (W&N, £16.99), her first book, is a skilfully assembled blend of true crime, literary analysis and cultural criticism exploring the associations between the real story of Sally Horner’s abduction and the writing of Vladimir Nabokov’s beloved, notorious book. Weaving between the two stories, Weinman is careful not to overstate her case, allowing that Lolita would certainly have existed without Sally Horner, but insisting that the narrative was undoubtedly strengthened by the inclusion of her story. Most affecting perhaps is the extract from Véra Nabokov’s private diary expressing her dismay at the public reception of the novel: “I wish someone would notice the tender description of the child’s helplessness, her pathetic dependence on the monstrous HH, and her heartrending courage all along . . .” In restoring a real victim to the picture, Weinman’s book is an eloquent, compassionate, fluent act of noticing.

That other most wonderful time of the year is looming, when every day feels like one long meal; bracing then to have a book short enough to finish between courses, so to speak. Mick Herron’s The Drop (John Murray, £9.99) is a darkly funny, beautifully written Slough House novella to tide us over until the real thing comes along; Stephen King’s Elevation (Hodder & Stoughton, £14.99) is by Frank Capra out of Ray Bradbury, a magical small-town story of unaccountable weight loss, prejudice, long-distance running, understanding, vegetarian Mexican food and ascension into heaven.