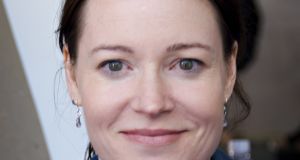 “Here’s Stonebridge’s dirty little secret: Behind the regal name, old-school architecture, the wrought-iron fence, the buildings named after dead writers, and the fifty acres of untamed land, Stonebridge is not better than any suburban high school . . . Students land here because they either are too fucking weird to survive in cookie-cutter prep schools, have a deep history of insubordination, test poorly, or are unrepentantly lazy.”

In a Sins of the Fathers way, Stonebridge is a scandal waiting to happen, and always has been. For the quirkiness of its humour and the extent to which its adult heroine, Alex Witt, is still emotionally embroiled with her parents, The Swallows is redolent of Lutz’s sublime Spellman series about a family of private detectives, but there is a lode of molten rage at the new book’s core, and it is in no way a spoiler to quote from the final paragraph, which is quite literally a call to arms: “You can keep telling girls to be polite . . . and it’ll all work out in the end. But . . . don’t be shocked when they decide that if they can’t win a fair fight then they’ll just have to fight dirty.” The Swallows (I’ll just say the title has nothing to do with birds) is a must-read for teenage girls of all ages – and their brothers.

In a pre-internet world, the central conceit of The Second Sleep (Hutchinson, €15.99), Robert Harris’s remarkable new novel is that for undisclosed reasons, in the year 2025 civilisation collapses. To commemorate this apocalypse, the all-powerful Church has reset the calendar to the number of the beast, 666, as foretold in the Book of Revelations, and forbidden any knowledge of the world before the fall. The narrative in the opening chapters appears to be unfolding in 1468 Wessex but is actually taking place 800 years in the future. It might have had a chance of retaining the element of surprise, even if there are hints aplenty – parakeets in the trees, a pipe of tobacco – that all is not strictly of the 15th century. In any case, it is not as if Harris is seriously intent on maintaining the illusion; within a mere three chapters, Fr Christopher Fairfax discovers among the effects of the dead priest whose affairs he has been sent to settle a collection of objects “from the Elizabethan era” it was illegal to possess, including coins, plastic ware, a plate commemorating a royal wedding and “on the topmost shelf . . . what seemed to be the pride of the collection: one of the devices used by the ancients to communicate”. Reminiscent of Charlton Heston finding the Statue of Liberty buried in sand in the original Planet of the Apes, Fairfax inspects the phone: “On the back was the ultimate symbol of the ancients’ hubris and blasphemy – an apple with a bite taken out of it.”

The pre-industrial, neo-mediaeval world of The Second Sleep is vividly rendered, and Harris’s rationale for the resurgence of the Church, whose various other strictures include policing all written and spoken language so that it complies with the English of the King James Bible, is simple: in contrast to the modern towers of glass and steel, which would quickly perish without electricity, the stone churches of England will survive – as spaces of sanctuary, as meeting places, and once again, in times of neo-feudal hardship, as houses of worship. Fairfax, beguiled by a local widow and intrigued by the heretical priest’s library, becomes an unintentional investigator, part archivist, part archeologist, and digs deep into the past to uncover the forbidden truth of the catastrophe. The novel comes in at a lean, utterly compelling 327 pages, and while normally in this column I am to be found bemoaning the bloated length of most new fiction, I would happily have read 300 more pages. It’s cheering to report that a spin-off TV series is in the works, with the goal of expanding the universe Harris has so ingeniously created.

Louise Philipps’ new novel, The Hiding Game (Hachette Books Ireland, £13.99) is a departure from her award winning Dublin-set Kate Pearson series, a legal thriller in the Grisham mode set in Corham, a small town southeast of Boston. Heather Baxter is returning to her hometown, scene of her mother’s murder, at the behest of a prominent local family to defend a young nanny charged with fatally harming an infant. Phillips skilfully depicts the media manipulation of the trial while Heather’s tragic backstory inevitably comes into play. The canvas is broad, the cast large and the plot complex and full of artful misdirection. In a well-paced multi-voice narrative, Phillip moves the pieces around the board deftly and with no little feeling. I especially enjoyed the devastatingly unsympathetic portrayal of the bereaved parents; there’s an exquisite streak of malice to the writing, and if the climax leans into camp, it nonetheless makes for a satisfyingly lurid conclusion.

AS Hatch’s first-rate debut, This Little Dark Place (Serpent’s Tail, £12.99) is a spare, elegantly written chiller in the true Highsmithian register. Daniel, our damaged, diffident carpenter protagonist, having served a long prison sentence, retraces the steps that led him to captivity, charting his unhappy childless relationship and gradual drift into chaos. The plot is as well turned as the cabinets Daniel makes, the narration is unreliably delirious and there’s an inspired use of Brexit, first as an unearthly chill across the land in the referendum’s immediate aftermath and then as a frenzied, Brueghelian street party in a seaside town, a fittingly grotesque backdrop to the novel’s unsettling progress.

A Better Man (Sphere, £19.99) is the latest addition to Louise Penny’s irresistible Armand Gamache series, and once again, Penny’s uncanny ability to locate the darkest human behaviour – in this case, spousal and familial abuse, murder and worse – in sight of the shrine to civilised human values that is the Quebec village of Three Pines continues to inspire. A Better Man takes place as the village braces itself for a flood, and among other themes explores the malign effects of Twitter trolling on painter Clara Morrow’s late career crisis, passages that amount to an acute mediation on waning artistic powers. The keynote quote for the book comes from Moby Dick: “all truth with malice in it”; the intrigue within the Sûreté is as Byzantine as ever, if this time to a more affecting end. The dedication is to Penny’s late golden retriever, Bishop, who lives on in the book. Penny is an absolute joy.