A Drop of Patience: Insight into US and race by original woke writer 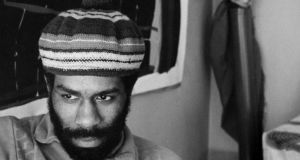 US novelist William Melvin Kelley in Paris 1968: moving, honest account of a young black man trying to find his way in a hostile world.

Book Title:
A Drop of Patience

Regular readers of New Fiction may remember a review late last year of a rediscovered classic, the African-American author William Melvin Kelley’s A Different Drummer. The debut novel, first published in 1962, was unearthed in a jumble sale by the New Yorker’s Kathryn Schultz and subsequently given a new release to widespread critical acclaim. In A Different Drummer, Kelley came up with a unique and interesting premise – what if a black man in 50s America decided to walk away from his hard-earned property to establish instead a brand new country for his people?

In this second novel, also written when Kelley was in his 20s, there is another intriguing premise. The narrator, Ludlow Washington, is a blind black man who has been institutionalised since childhood. Through his innocence of the world around him, the reader learns much about life for black people in mid-20th century America. From the outset, Kelley sets up his protagonist as a visionary, a Tiresian-like character who sees the world in an exceptional way.

A bracing opening section introduces a five-year-old Ludlow, abandoned by his father to the care of a brutal state home for blind black boys. (The blind white boys, as Ludlow soon learns, get sent somewhere else.) Within moments of arriving, Ludlow is set upon by an older boy who calls himself his master: “The boy twisted his ear before he answered . . . You got a master as long as you live.” In a few short pages, Kelley vividly evokes the strange, scary world from the child’s perspective: “Then they began to paw him. Their hands moved over every part of him, especially his face and head.”

In a more conventional narrative, we might stay in this compelling environment but Kelley’s invention is to skip over the brutality of 11 years in the institution and instead give us Ludlow as an intrepid 16 year old whose musical talent has bought him an early release from the home. Learning first the piano and then the horn, Ludlow is spotted by a jazz session player, Rodney, who buys his release and sets him up in swinging, downtown New Marsails.

On retainer with Rodney and his band for two years, Ludlow moves into a nearby digs with a landlady who educates him about the world: “It bad to be coloured, Missus Scott?” “He did not feel bad and wondered if he was just stupid.” Her response is typical of the wry social commentary that Kelley gets into his book through character. “Sometimes I think even the best-looking of us is ugly to white folks.”

Later sections that show Ludlow going on to great fame in the jazz community are also tinged with racial prejudice. On the rich, white audiences he plays for in New York, we’re told: “White folks ain’t never bad. They just weak . . . Here they round you up and push you in a slum, all the time telling you how much they love you.” One particularly memorable scene sees Ludlow undergo a breakdown, where he dresses up as a minstrel before going on stage to perform.

Kelley is as good on disability as he is on race, and life for a blind person is skilfully depicted in his novel. From the everyday details – “He rolled over and placed his fingers on the face of his clock (an ordinary one with the glass removed)” – to the tragedy of how his young bride Etta Sue doesn’t trust him with their new baby: “For him the baby remained a small cry in the corner of the room.”

The relationship doesn’t end well, which is sadly typical for Ludlow’s relations with all women. They are either juvenile and sex-obsessed, or else full of idealism and not grounded in the reality of Ludlow’s troubled past. With these numerous failed relationships, Kelley asks us to consider how a man who was never loved as a child is supposed to be able to love either himself or others as an adult.

Though his second novel lacks the seamless time transitions and narrative flow of A Different Drummer, there is plenty to recommend in its moving, honest account of a young black man trying to find his way in a hostile world. From New York, Kelley died in 2017 but left behind a large archive of writing and photographs. In the 1960s, he was part of the Black Arts Movement and was compared to authors like James Baldwin and William Faulkner. In 2014, he was officially credited by the Oxford English Dictionary with coining the political term “woke” in a 1962 New York Times article entitled “If You’re Woke You Dig It”. Both his novels confirm his reputation as a thoughtful, inventive writer who was well before his time.

Johnny Logan: ‘Dickie Rock is a legend in his own head... He lives in a fantasy world’
3