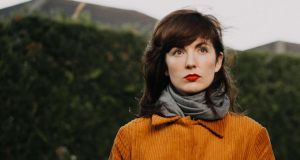 Paris Syndrome, the title of Lucy Sweeney Byrne’s debut collection, is an apparently real psychological condition brought on by dismay when the City of Lights does not live up to one’s romantic expectations. Symptoms may include hallucinations, anxious sweating and extreme ennui. But traveller beware: we learn quickly from Sweeney Byrne’s sharp, evocative writing that there are many locations across the world that can induce a similar state of being.

The whirlwind trip takes in the States, Havana, Mexico, France, Donegal and, most surprisingly, Chernobyl. What becomes clear early on is that a young woman in want of experiences and adventure leaves herself open – even in this so-called age of equality – to dangers that range from everyday to life-ending.

Sweeney Byrne takes us through the terrain with either a first-person voice, autofictional in tone, or a third-person narrator called Lucy. Both have similar world views, insights and preoccupations. From the outset we meet a woman who wants to push boundaries and document her experiences. There is the sense that if a man got up to much of what goes on in the 11 stories, it would be viewed in picaresque terms, jaunty episodes that reflect the sometimes hedonistic lifestyle of young people in search of different lands and cultures.

In Paris Syndrome, the line is more fraught, with the author keen to document the undertones and unmentionables that often accompany the kindnesses of strangers towards lone women. In the vivid opening story, That Sinking Feeling, the narrator lives and works for a peculiar woman on a boat in Brooklyn in near-freezing conditions that ultimately leaves her in need of a saviour. It comes in the form of Bobby, an older American with money who buys her drinks and medicine and brings her back to his house to have a bath. It is the first of many uneasy, eminently believable transactions that blur the lines between protector and predator.

That Lucy herself is frequently complicit in the transactions adds depth and interest to the stories. The voice is hugely self-aware, unafraid of turning her sharp light inward. As she says in one of the strongest stories in the collection, All My Exes Live in Texas, “I could sense myself becoming all wide-eyed and girly and I have always depended on the kindness of strangers-y.” This tactic works to get her a lift from the airport to her ex-boyfriend’s place and the story then unfolds in a series of uncomfortable meetings with men – the Deliverance esque locals in an isolated gas station, the pest in the cafe who calls her “purdy”, the handsome, aggressive bar punter attracted by her low-cut top and red lipstick. As with so many of the stories in Paris Syndrome, the details are vivid and the atmosphere tense throughout.

From Wicklow, but currently living in London, Sweeney Byrne writes stories, essays and poetry. Her work has appeared in Banshee, the Stinging Fly, the Dublin Review and Grist. In subject matter and voice, there are parallels with contemporary writers Nicole Flattery and Kristen Roupenian. The latter’s Cat Person comes to mind in the book’s startling closing story, Le Rêve, where the narrator’s impulsiveness sees her uproot her life in Dublin for New York and an older man she meets once while working as a tour guide. The first night she settles in her new home, she’s thankful that “naked, his skin hangs off his bones less than she’d feared it would”. There is, however, little in the way of desire. Like Margot in Roupenian’s famous story, Lucy gets off “purportedly to thoughts of him, but in fact to thoughts of this very situation – that is, of herself, arousing him”.

There are also echoes of Flattery’s recent collection Show Them A Good Time, where smart, funny women document the frequently absurd relations and situations of modern life. “What does loneliness really feel like, after all?” asks a narrator in Paris Syndrome. “What I was experiencing – the scooped-out hollowness, the dull ache, the longing for warm touch – these could have been caused by a number of things, I reasoned. Vitamin deficiencies, or the weather.”

Sweeney Byrne is a skilful writer, excellent at syntax. Her memorable descriptions flow in long, elegant sentences: “An old bow-legged man, carrying a blue plastic bag filled to bursting with oranges, emerges from the cool darkness of an alleyway to their left, making Santiago flinch.” If there is a problem with her stories, it is in structure and transitions. Some of the earlier pieces jump about a lot in time and can test our concentration and interest.

There is, however, a compulsive quality to her writing, and it is easy to see why Banshee – an up-and-coming literary magazine with a strong feminist bent – has chosen Paris Syndrome as its first book for publication. It is a commendable debut with plenty of hallucinations, anxious sweating and little in the way of extreme ennui.

The movie quiz: ‘Jaws’ appeared in how many James Bond films?
3