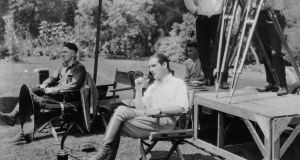 Rex Ingram, circa 1925. The movie director features in Gerard O’Donovan’s crime novel, The Doom List. When Ingram commissions a PI to investigate allegations against a leading lady, the PI finds himself involved in blackmail and murder. Photograph: John Kobal Foundation/Getty Images

Blood of the covenant is thicker than water of the womb, as they very rarely say these days, and Arlene Hunt’s latest thriller, No Escape (Hachette Ireland, €13.99), thrives on the tension of gang loyalties ripping families apart. The families in question are the Wards and the McCabes, Dublin crime dynasties linked by marriage but in a constant state of simmering conflict that requires only one murder to blow the whole powder-keg sky high. No Escape teems with the kind of despicably entertaining ensemble cast that tended to populate Elmore Leonard’s novels – grasping thugs, predatorial low-lives, sociopathic little Caesars – and Hunt doesn’t stint on the black humour that permeated Leonard’s stories either. One son, for example, remembers how “his father used to look at him like this from time to time, like he was a broken gift with a no return policy”. That’s not to say No Escape is a comic novel. Firmly rooted in a brutal underworld in which murder is both a means to an end and a crude mode of communication, No Escape is a pulsating account of contemporary Irish crime that is, as its title suggests, dyed in the deepest shades of noir.

Religious martyrdom is an unusual theme for a contemporary crime novel, and even more so when it provides the motive for a suspicious death. Set in Dublin in 1982, Nicola White’s A Famished Heart (Viper, £8.99) opens with a priest discovering that two of his parishioners have deliberately starved themselves to death. Called in to investigate, detectives Vincent Swan and Gina Considine are gradually persuaded that the dead women – sisters Berenice and Rosaleen McNamara – were unequal partners in their paradoxically “devout suicide”, and that there might well be a sinister aspect to their sacrifice. Nicola White’s superb debut In the Rosary Garden (2013) was inspired in part by Irish recent history; A Famished Heart is inspired by “the true-life tragedy of four women who starved themselves to death in a house in Leixlip”. There are elements of gothic horror here – the sisters’ corpses are so desiccated as to be mummified, and there are references to the crypt at St Michan’s and saints preserved in glass coffins – but for the most part White delivers a sombre, psychologically nuanced and compassionate account of Swan and Considine’s investigation into piety taken to its illogical extreme. The first of a proposed trilogy from White, A Famished Heart is as gripping as it is disturbing.

Set in Hollywood in 1922, Gerard O’Donovan’s The Doom List (Severn House, £20.99) is his follow-up to The Long Silence, which introduced Tom Collins, formerly a fixer at the Famous Players-Lasky studio and now “a private enquiries man”. When the movie director Rex Ingram commissions Collins to investigate potentially damaging allegations against leading lady Barbara La Marr, Collins quickly finds himself dragged into a morass of blackmail and murder. The movies may be black-and-white but everything else in O’Donovan’s novel is rendered in shades of grey: no one in Hollywood is innocent, Collins discovers, least of all the ostensibly squeaky-clean stars of the silver screen. Blending historical figures – Ingram and La Marr, Ramon Navarro and political fixer Kent Kane Parrot – into his vividly etched story, O’Donovan delivers a stylish, scabrous and punchy private-eye investigation.

Sylvie Lee has it all, according to her younger sister Amy: a brilliant career, stunning looks and a loving husband. So why has this devoted sister and daughter fallen off the map? Jean Kwok’s Searching for Sylvie Lee (John Murray, £16.99) begins with Chinese-American student Amy travelling from New York to Amsterdam, determined to find the missing Sylvie, even though Amy is, by her own admission, “a useless, shy little sister”. An especially hapless amateur sleuth, Amy is flummoxed by the cultural differences in Amsterdam; complicating matters is the fact that Sylvie spent her formative youth in Amsterdam, fostered out to distant relatives, all of whom seem to have a motive for wanting Sylvie to disappear. White privilege, casual racism and growing up as an ethnic “other” all play their part in Kwok’s third novel, and while the latter stages strain credulity as Kwok ties together her disparate elements, the novel is for the most part an absorbing investigation into “how trauma gets passed down from generation to generation”.

Journalist Malachi O’Doherty has previously published a number of memoir and non-fiction titles. His debut novel, Terry Brankin Has a Gun (Merrion Press, €16.95), centres on the eponymous anti-hero, who was once an IRA “bomber with a conscience” and is now a solicitor in post-Troubles Belfast. The reopening of a cold case brings Insp Basil McKeague to Terry’s door with accusations – which the reader already knows to be true – of Terry’s involvement in the murder of three civilians in 1985, which in turn leads Terry’s old comrades, and particularly his former commanding officer Dominic McGrath, who is now a political powerhouse (or “peace processor”), to take an unhealthy interest in Terry’s remembrances of things past: ” Parallel narratives, which juxtapose Terry’s early involvement with the IRA during the early years of the Troubles with his increasingly desperate attempts to extricate himself from the consequences of his past actions, combine to deliver a superb thriller rooted in a living history that seems inevitably doomed to repeat itself.

Declan Burke is an author and journalist. His current novel is The Lammisters (No Alibis Books)