Compass review: A delightful odyssey into learning made easy 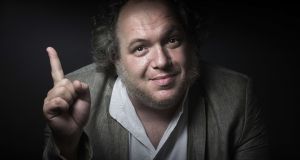 Mathias Énard: the French novelist has an uncanny gift for merging the glories of the past with the ravages of the present. Photograph: Joel Saget/AFP/Getty

Franz Ritter, scholar and dreamer, is troubled. It appears that his great love is unrequited, which may render his situation poetic if only barely tolerable. At least he can expect emails from her. Yet far worse, for Ritter and for the reader, who is very much on his side, perhaps he has simply failed to assert his intentions clearly and lacked sufficient passion to win his beloved, who was possibly wavering.

Either way, it adds a poignant subtext to a seductive narrative, one rich in wry humour, real-life characters, ideas, colourful anecdotes and digressions. Or, then again, the fabulous wealth of cross references from classical music, literature and history may be little more than a scholar’s endearingly futile attempt to ease his pain. Not that the reader could possibly complain. Even in his extreme despair Ritter can be depended on to offer an erudite analogy. “Life,” he says, “is a Mahler symphony, it never goes back, never retraces its steps. This feeling of the passing of time is the definition of melancholy.”

As Ritter is bedridden in his Vienna apartment when we meet him, ill and depressed, and has decided that his adored Sarah’s thesis could be approached as “a catalogue of melancholics, the strangest catalogue of adventurers into melancholia of different kinds and from different cultures”, this is a delightful, and devastatingly exciting, odyssey into learning made easy.

Few works of contemporary fiction will yield as much pleasure as Compass. Reading it amounts to wandering into a library arranged in the form of an exotic sweet shop, full of tempting fragments of stories guaranteed leaving you wanting more. Quite an achievement for a novel approaching 500 pages.

Compass spans one night in the imagination and memory of a sympathetic individual who recalls Ivan Goncharov’s famously apathetic Oblomov. A gracious old-world quality prevails as the French maestro Mathias Énard lovingly spins his spell, but this novel of ideas is laced in intent as well as intriguing stories and personal incident.

Énard is the author of Zone, in which a Croatian mercenary, sitting on an express train hurtling between Milan and Rome, reflects on his vicious record as part of humanity’s savagery. Énard has an uncanny gift for merging the glories of the past with the ravages of the present. It is ironic that Compass, which appears to be the musings of a scholar who may well be dying, is both timely and topical. Central to it is the ongoing destruction of the glory that was Aleppo.

The theme is the conflict between East and West, and the incalculable debt western culture owes to the genius of the East. It is significant that Ritter, his narrator, is a musicologist whose investigations into eastern influences on western classical composers. Ritter’s feelings are intensified because Sarah, the beautiful French scholar with whom he is obsessed, is herself researching cultural relations between East and West – and because he is Austrian.

Aside from Énard’s having fun with praising Beethoven for having the wit to abandon Bonn for Vienna – subtext: leave Germany for Austria – he sees Vienna as the gateway to the East. Énard distances himself from France by allowing his story to be told by an Austrian who does not quite understand France, any more than he does Sarah, who is French.

Compass is translated by Charlotte Mandell, who so brilliantly conveyed the single-sentence, 500-page urgency of Zone. This new book takes its title from a gift that Sarah gave to Ritter: a compass once owned by Beethoven. The composer had it altered so it always pointed due east, not north.

Balzac, we are told, was the first European writer to quote from an Arab text. Time and again Ritter inserts facts, probably more fact and enticing detail than opinion, although his views are clear. Compass may be a cerebral book, but it is not oppressively polemical. Énard is subtle, aside from a few direct punches: “Europe sapped Antiquity under the Syrians, the Iraqis, the Egyptians. Our triumphant nations appropriated the universal with their monopoly on science and archaeology, dispossessing the colonized populations by means of this pillage of a past . . . so brainwashed Islamists wreckers drive tractors all the more easily through ancient cities . . . ”

Énard is a scholar of Arabic and Persian. He has lived in Syria, and Ritter recalls his experiences in Damascus and Aleppo. Tehran becomes particularly significant because of a quasi-romantic near-miss. There is vivid fluidity about the descriptions.

Early in the narrative Ritter recalls a description of Istanbul drawn from the playwright Franz Grillparzer’s travel journal, which he mulls over and makes his own: “ . . . whether you regard Constantinople as the easternmost city in Europe or the westernmost city in Asia, as an end or a beginning, as a bridge or a border, this mixed nature is fractured by nature, and the place weighs on history as history itself weighs on humans.”

The narrator sees Istanbul as “the limit of European music”, where Liszt had ventured almost as an evangelist. Grillparzer, an Austrian, wrote Beethoven’s funeral oration. Énard delights in making these connections.

It should be a showy performance, yet it is not. Mandell, the translator, conveys Ritter’s tone of wistful regret. True, one wonders exactly how exhausting it must be to reside inside Énard’s burgeoning mind and memory, but all the better for the reader.

Compass won the 2015 Prix Goncourt, holding off a challenge by the Algerian writer Boualem Sansal’s fancied and controversial dystopian prerace favourite, 2084: The End of the World. Sansal’s fable, championed by Michel Houllebecq, pays homage to George Orwell. Its objectives are fiercely satirical, yet Énard’s equally weighty message, filtered through the conversational, self-deprecating musings of a depressed failed lover, is more likely to remain in the memory.

In Compass Goethe, Hugo and Balzac emerge as readers intent on adventure. Énard pays tribute to the pioneering Austrian orientalist Joseph von Hammer-Purgstall, who spent 50 years translating works from Persian, Arabic and Turkish literature and introducing them to eager readers such as Goethe. Literature and art are presented in the context of a cultural exploration.

The obvious irony is that, whereas the literature could be translated, read and shared,the artefacts were removed, usually forcibly. The built heritage is now being destroyed.

For Sarah, knowledge is a personal quest, the intensity of which nearly dehumanises her. Yet traces of tenderness filter through; two friends hover on the edge of romance and fail to make a decision. Ultimately, Énard’s glorious dreamscape celebration of art, music and history is a romance, although his own love affair with the cultural legacy of the East overpowers the romance of Ritter and the ambivalent Sarah. As Ritter sustains his personal vigil during the long Viennese night, he reflects that people tend to die at daybreak.

Longlisted for this year’s Man Booker International Prize, Compass is beautiful, engaging and self-indulgent. Énard conjures up the wonders of the Middle East in a sorcerer’s cornucopia, alive with illusions and allusions, which is itself a cultural compass and so much more.