Calling Cards: ‘the green buds of Irish’ in the words of our young poets 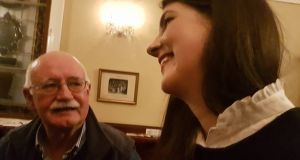 Late last month, the Gallery Press and Poetry Ireland published Calling Cards. This elegantly produced anthology includes 10 Irish-language poets, a carefully selected group of poems by each of them and translations into English by some of Ireland’s finest poets. It was an honour to co-edit Calling Cards with Peter Fallon. In this extract from my introduction, I do my best to prove that a poet’s genuine “calling” still stands for everything.

In Máirtín Coilféir’s Do Chara Liom the poet captures a particularly male streak of loneliness in flight:

Such was the dark mood or stir craziness that hit me last night
I actually went out and bought a soul-companion –
a huge lump of a fish the size of a pollock.
He goes by the name of Eamonn.
Since I don’t have an aquarium, Eamonn lives in a flower-vase
on the kitchen counter
and, after sitting up late drowning my sorrows,
I engage him in a little banter.
(Trans. Paul Muldoon)

The edgy tone of his opening lines is somehow reminiscent of the Irish-language Réics Carló detective series – recast by the translator in a way that matches Carló with Philip Marlowe. While Coilféir captures male loneliness and gruff flights of fancy, Marcus Mac Conghail isn’t above admitting to some old-fashioned male lust. In Beirt Bhan Óga the poet looks on in envy as two girls, having shared a single bicycle, now share a kiss.

There they are ahead of me
at the Dart station,
quenching their mutual thirst
with smothering kisses.
(Trans. Medbh McGuckian)

The poem is given the punch it deserves in Peter Fallon’s spitfire English:

From time to time I just
get tired of being a woman,
of the cuts to the chase
I’ve to put up with, and then the disdain.

The fact of the poem’s translation by a male voice adds a perplexing gendered twist to the original which is, of course, itself a twist on Pablo Neruda’s Walking Around.

Calling Cards gives us an opportunity to think about fatherhood as well as motherhood. In Timire Teallaigh/ Fire Tongs, Proinsias Mac a’ Bhaird shows his tender side, wearing the weight of the Gaeltacht with a welcome lightness:

Is tú an graoisín, a mhic,
ag éalú amach,
amach as an tearmann
a chruthaigh mé duit.

Little playboy,
mad to get out
of the box I made
to keep you safe.
(Trans. Ciaran Carson)

Of all the voices here, Mac a’ Bhaird’s natural Northern idiom is perhaps the most challenging to reproduce in English. It would have been impossible to carry his work over without Ciaran Carson’s bilingual insight.

The early, fog-filled days of motherhood are the subject of a poem by Ailbhe Ní Ghearbhuigh, Cuairteoir/The Visitor. The poem is powerful because it portrays the type of pram-trap claustrophobia which women couldn’t write about as freely in the past. For the globetrotting visitor in question, “the great ocean is a drop of water” (Braon uisce duitse an t-aigéan mór). He comes “with head-spinning tales from near and far” (Bhí scéalta go leor agat ó chian is ó chóngar). When he goes, however, normality resumes:

I spent time when my mind was fried.
I spent time under house arrest.
I thought I would roll over and die

but I stayed. You left.
Now I’m finding, once more, a rhythm
as the fog slowly lifts.
(Trans. Alan Gillis)

Ní Ghearbhuigh’s repeated “seal” combined with “ceal” gives the reader a very palpable sense of walls closing in and thereby accentuates the relief that attends her independence.

The contemporary and life-affirming female experience of Ní Ghearbhuigh’s poem is thrown into relief by the dark mythology of Doireann Ní Ghríofa’s Deirdre: Her First Syllable. The effect of this poem is by no means a béaloideas bail out. First person or not, her whirlwind takes on life draw us in. In this instance, Deirdre of the Sorrows (not the poet) describes the fateful night on which the druid pronounced her doom. Eiléan Ní Chuilleanáin’s English version evokes the same bracing tone of the original:

Havoc followed Cathbhadh’s verdict,
my future nothing
but trouble,
nothing but ruin to come through me.
(Trans. Eiléan Ní Chuilleanáin)

Literary tradition as well as the spontaneity of the living language breathe through the work of Simon Ó Faoláin. The liberty that his fluency permits him gives licence also to his translator Peter Sirr. It is a pleasure to compare the opening of Aimsir with that of the English version, The Weather on Mars:

A dark, spirit-slumping
woolly-hat-pulled-down-even-inside
kind of day. Beside me
the black cat snores in his chair,
folded in on himself.
(Trans. Peter Sirr)

As with Ó Faoláin the spirited pace of Stiofán Ó hIfearnáin’s shorter poems prevent them from growing bottom-heavy, from backing themselves into corners. Ó hIfearnáin’s longer poem, Melusine, is one of the many reasons why his first collection is much anticipated. The last verse, especially, harmonizes old and new ideas:

As Suella Holland’s photograph of the oxidized weighing scales on the cover conveys Calling Cards is conscious that any venture like this is a balancing act. Poetry Ireland in collaboration with The Gallery Press wanted to provide the “younger” Irish-language poets with an opportunity to declare, as one of them has put it, “the stuff of which (we’re) truly made”/ “an mianach tá (ionainn) a fhógairt”. By contributing to this anthology we seek to live by Seamus Heaney’s rule in attempting not to narrow our poetic scope: “One of your functions is to say that your language and your consciousness are as wide as the world. You shouldn’t censor your intelligence or the width of your sympathies.” Against that the Irish language poet has to weigh his or her commitment to what Caitlín Nic Íomhair calls – “glasghléas na Gaeilge”, almost untranslatable but rendered by Colette Bryce as “the green buds of Irish”. In the tension of the scales is a latent potential for fresh growth:

Rouse me, bring me forth,
my love. It is time for spring.
(Trans. Colette Bryce)