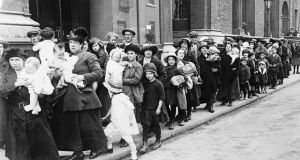 Original Caption: Irish Refugees Pour Into Dublin. A large number of refugees from Belfast arriving in Dublin, where they were quartered in Marlborough Hall. The recent uprisings have made hundreds of families leave their homes for regions of safety. June 1922. Photograph: Getty Images

In a scene towards the end of Seamus Deane’s Reading the Dark (1996), an RUC sergeant considers the dangerous effect of memory on the North of Ireland: “Politics destroyed people’s lives in this place… People were better not knowing some things, especially the younger people, for all that bother dragged on them all their lives, and what was the point?”.

This outlook, as the policeman says, was produced by his own inability to forget the killing of a colleague “in the days of the shootings after the Treaty”: “Those were bad years, the early twenties. Northern Ireland had a cruel birth. And Billy Mahon had a cruel death”.

Coming in Deane’s autobiographical novel about disentangling family history from revolutionary violence, the passage articulates the difficulty of reconstructing the past in a present that is indelibly marked by it. Yet even as Burke suggests that young people forget about the early twenties, he cannot help but have his own say about it.

These unsettling memories of partition haunt Patrick Roche and Brian Barton’s recent article on the “unionist history of Northern Ireland”, which even as it seemingly “remembers” the birth of the northern state downplays the circumstances in which it came about.

This inability to confront the unseemly realities of the establishment of the six-county state has been longstanding, even reflected in those unionist histories written to celebrate its birth. David Alfred Chart’s A History of Northern Ireland, published in 1928, dedicated only a single paragraph to partition in fear of “reopening recent controversies and recalling many painful memories”. In this semi-official history, Chart articulated a unionist chronology which considered the Border as much a mental as a physical one, and anachronistically mapped “Northern Ireland” on to four centuries of Irish history.

Whether stretching as far back to the Battle of Clontarf or the Plantation of Ulster, influential historians who, like Chart, were sympathetic to each state, adopted a long view of Irish history that framed partition as an inevitable consequence of incompatible identities. In particular, the idea that a separate unionist state was initially imagined or even accepted in “Ulster” persists even to this day.

To paraphrase Nancy Isenberg, we know what partition is. Or at least, we seem to think that we do: a hundred years ago, the only possible “democratic” solution to the fallout of the Irish revolution was the division of Ireland into two states: one largely Catholic, nationalist and southern; another mostly Protestant, unionist and northern.

Partition accorded to the wishes of the inhabitants of Ireland in the 1920s, with the unfortunate but necessary evil of those nationalists and unionists left on the wrong side of the dividing line. The border on the island, whatever its gestation, was as much of a mental as a physical one, and its establishment was simply a reflection of the social and cultural makeup of these states. Or so the story goes.

Few of these accounts acknowledge the violence, displacement, and even sheer disorientation that many suffered as a result of this creation, with the obvious example of the early “troubles” in Belfast and Derry rarely featuring. Instead, the emergence of the Border was an anodyne way of protecting the seemingly static and incompatible social and cultural identities of the island. Any obstacles to these dominant narratives of a unionist “north” or a nationalist “south” on the level of class, gender or politics were to be avoided. Telling the story of “Northern Ireland” or the “Irish Republic” was made easier by omitting these complications.

In his own history of partition published in 1951, Dennis Gwynn claimed that “The complete story has never been published… there has been no coherent narrative even of the facts which are already available”. Another reason that the histories of partition and the foundation of the northern state are so malleable is because many of its violent particulars were concealed at the time, and many accounts reflect the lack of a coherent narrative that Gwynn lamented.

Although in the summer of 1922 Michael Collins commissioned Facts and Figures of the Belfast Pogrom, a comprehensive body of propaganda about attacks upon Belfast Catholics, all but 18 copies of it were pulped before it was disseminated. Similarly, with the Dáil divided over the issue of making the sessions public or private, the full record of the Treaty Debates was only made available in 1972.

The Boundary Commission sat in private until one of its three representatives leaked its conclusions to the London Morning Post in November 1925. At the subsequent private Tripartite conference which scrapped the Commission and copperfastened the shape of partition, a consensus was reached that the full commission report would be “burned or buried… in the interests of Irish peace” at the suggestion of WT Cosgrave. In his moment of victory James Craig immediately agreed with this suggestion, going as far as to state that he had no intention of even reading the report because “it would be better that no-one should ever know accurately what their position would have been”.

Amidst much confusion and despair, particularly on the part of northern republicans, the report was duly closed to the public for over four decades. As Clare O’Halloran notes, by December 1925 the boundary dispute had become “no more than an evil memory” in the words of the Irish Times.

The suppression or destruction of documents was commonplace during the first years of each state, alongside the division of archives, records and libraries that the partition of the island entailed. While the obliteration of the Public Record Office of Ireland has been emotively cast by Tom Garvin as “an attempt to murder the nation as a collective entity with a collective memory”, the establishment of partitioned states also entailed acts of violence upon the “collective memory” of the island.

The pulping or “burying” of documents in private may have been less spectacular than the maelstrom of fire that engulfed the Four Courts at the start of the Civil War, but these acts of censorship meant that it was all but impossible at the time to understand the recent past. Such confusion led to many asking whether these “evil memories” should even be salvaged. This was not just a “unionist” attitude.

In justifying entering the northern parliament for the first time in April 1925, the leader of northern nationalism Joe Devlin claimed it would be wrong to “stir up forgotten feuds, or renew bitter memories of a past that had better be buried and forgotten”. While this conciliatory attitude towards the past and the northern state in general would prove futile, the sense that peace could only be protected by disregarding the past has lingered.

Ironically echoing the words of his spiritual predecessor, John Hume wrote in the 1990s that “too much respect for the past… tends to inhibit progress”. Hume later argued that while partition may have once been a “vivid memory” and “a shock and hurt in Nationalist Ireland”, peace and implementing the Good Friday Agreement outweighed all other concerns.

Preoccupied by myths and elisions, the narratives which have encircled partition and the foundation of each state on the island have been fraught with a longstanding ambivalence towards reliving the trauma of the 1920s. The foundation narratives of the “United Kingdom”, of “Northern Ireland”, of “the Irish Republic”, have all held an enduring appeal since they were first written and told. But the story of partition has not, and whether mental or material, these suppressions of memory over the last century seem to have made any prospect of understanding it almost impossible.

But the continued emergence of partial histories of the division of island have as much to do with an historical as a contemporary unwillingness to acknowledge these complications. Forgetting the violence and turmoil of these years may make these foundations a more palatable memory for some to publicly celebrate these years, but some way of clearing up the confusion might be to start thinking about how partition still actively conditions the everyday life of the island. Perhaps beginning there will help us to remember what we, like Sergeant Burke, have always been trying to forget.

Stephen O’Neill’s Irish Culture and Partition 1920-1955 is forthcoming with Liverpool University Press. He was most recently an NEH Fellow at the University of Notre Dame’s Keough-Naughton Institute for Irish Studies.