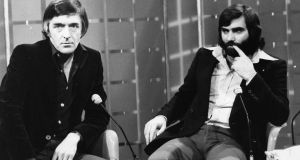 Broadcaster and author Michael Parkinson revisits a subject close to his heart in this memoir – that mesmeric footballer, the beautiful George Best. Photograph: William H Alden/Getty

Michael Parkinson
Hodder & Stoughton, £20
George Best was the greatest player Michael Parkinson has ever seen, “sublime and unstoppable”; he brought glamour to soccer as “the fifth Beatle” and “the Pied Piper of sixties Britain”. The central theme of this lively, personal and poignant memoir is where and why it all went wrong for Best – giving up playing for Manchester United at only 27 and drinking himself to death.

“The ultimate irony of [his] career was that although his gifts and looks made him the perfect product for his time, and he was exploited as such, no one thought how to protect him.”

He had no self-pity, blamed no one but himself and didn’t want to be saved. He wasn’t given to introspection but Parkinson believes “there was within him a profound melancholy”. This memoir combines Parkinson’s thoughts about Best’s life with excerpts from TV interviews with him and others, as well as revisiting relevant parts of his 1975 biography of Best. But why he chose the path of self-destruction is perhaps unanswerable in the end. – Brian Maye

Ann Devine: Ready for Her Close-Up

Colm O’Regan
Transworld Ireland €14.99
“Where would I get keifir around here? [ . . . ]We’ve heifers, but no keifir.” Welcome to Kilsudgeon, a rural village teeming with vivid and humorous characters. There’s the (potentially) corrupt TD, Patsy Duggan, the feminist young “wan”, Freya, the American capitalist, Oona and the vice-chairwoman of the Tidy Towns committee and eponymous Irish Mammie, Ann Devine.

But what is a mother to do when all her children have grown up and left home? The answer is to join the Tidy Towns committee and star in a viral YouTube video, according to Mrs Devine. However, when a Hollywood film crew descend on Kilsudgeon to record a TV series called The Celts, the locals have a hard time adjusting to their “notions” and, meanwhile, Ann becomes entangled in a land dispute over a fairy fort.

Beneath the hilarious one-liners and the cringe-worthy descriptions of us Irish, this book captures something warm and wholesome – like eating a Cadbury’s chocolate bar when you live abroad. It feels indulgent and reminds the reader of home. Prepare to laugh and grimace at the antics of the Irish Mammie.
– Mia O’Halloran