Browser: Not so tickled – a biography of Ken Dodd that stays on the surface 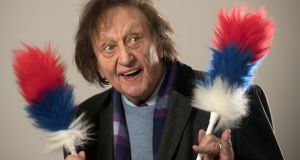 Happiness and Tears: The Ken Dodd Story by Louis Barfe

Much of Ken Dodd’s comedy arose from his appearance: hair sticking up as if electrified, two huge protruding teeth, large pointed nose and the ever-present “tickling stick”. The British comic’s mad, energy-charged zany act enthralled his audiences for decades as he fired out gags. He was happy to keep on perennially doing the same thing and it paid (he left £27.7 million in his will). The title suggests a possible look at the darker side of Dodd but there is far more on the “happiness” than the “tears”. We do learn that he had no social life to speak of, was engaged to one woman for 24 years until her death and then to another for 40 tears and was extremely tight with money. A readable tribute to the funny public man but too little probing of the gloomy private one. Brian Maye

In the US, 150 people are killed each day by the opioid epidemic. The White House estimates that the crisis has cost the country one trillion dollars. Shocking stories abound including one where a mother bathing her baby leaves the hot water running and passes out on pills. The baby is boiled alive. American Overdose outlines the timeline of the opioid epidemic from Kentucky’s first “pill mill” in 1996 to Donald Trump’s declaration of a public health emergency in 2017. Chris McGreal gives a shocking insight into the crisis and the forces that have enabled it to flourish notably “bad science, corporate greed, and a corrupted medical system”. It is a dark – and infuriating – insight into the true human cost of the opioid epidemic and the consequences of “pain as profit”. Brigid O’Dea

With some playful titles such as Hotel du Jack and Ella G in a Country Churchyard, there is much humour in this short story collection, especially Effusion of the Divine Feminine, Who Is My Neighbour? and Now and Forever. But there are also skilful and telling insights into the realities/difficulties of parenting, of sustaining relationships, of being an old-fashioned children’s entertainer in a PC world gone mad, of being a middle-aged workshop leader who’s lost his mojo and of being a harassed-at-work dad trying to cope with his children’s schoolrun, among others. The Angry Sun God is a sad story with a shocking sting in the tail and Lord in Your Mercy a really interesting story of a devout woman who has a sexual relationship with a priest. Some stories don’t work but it’s an impressive debut. Brian Maye

The Second Shift by Clare Gallagher

No sooner has Clare Gallagher’s quietly furious photobook, The Second Shift, landed when Oxfam Ireland announce women here contribute 38 million hours of unpaid care work every week, and that “sexist economies are enabling a wealthy elite to accumulate vast fortunes at the expense of ordinary people particularly women and girls”. This, 50 years after Second Wave Feminism? Sweet Jesus. A photography lecturer at Belfast School of Art, Gallagher’s third book, named by The Guardian as one of 15 best of 2019, worries away at an on-going dilemma: getting the domestics done, while calling out for resistance to capitalism’s neatest trick – getting us ladies to work for free. Her photos focus tightly on the unacknowledged banal – baskets of overflowing laundry, overstuffed bins, food detritus in the sink, fogged up windows, as well as beautifully tender portraits of her three young sons. There’s a savage poem by Leonita Flynn and Joan Rivers’s fabulous quote: “I hate housework! You make the beds, you do the dishes – and six months later you have to start all over again.” Back to the barricades sisters. Rosita Sweetman

The 24-Hour Cafe by Libby Page

Stella’s 24-hour cafe is a charming place; somewhere to take refuge in the hours that can sometimes be hard to fill; a haven in a city when it can be hard to find somewhere to be when other people’s hectic lives mean they’re elsewhere. Libby Page sets her follow-up to The Lido in a London cafe and populates the book with a cast of customers who are night owls or early risers. Their stories are of friendship and kindness, marriage and separation, love, bereavement and betrayal, the staples of easy-to-read fiction. Hannah and Mona, the waitresses who watch the ebb and flow of customers, have their own waitress/singer and waitress/dancer stories, but it’s their friendship that forms the backdrop as their customers come and go. This is gentle storytelling where sweet and bittersweet tales unfold with the ticking of the clock and the gurgle of the coffee machine. Claire Looby

The Captain and the Glory by Dave Eggers

In this allegorical novel, the Glory is a US ship and the captain is the president. It’s a very funny satire on Donald Trump which succeeds because it creates a fully rounded comic, analogous world. Through this crazy world Eggers provides a strangely truthful version of the president’s psychological make-up. He is a fearful anxious creature who ends up sleeping in terror under his own bed; he listens to the ludicrous fear-mongering of a voice in the pipes (Steve Bannon? His psyche?) and is strangely comforted as the fearful messages chime with his own personal fears. His tweets are hilariously parodied as messages on a wipe-board – brilliantly capturing the random lunacy and inherent threat. Ship wreck is precisely charted. Mostly dark, funny and inventive, though ending in earnest hope. Kevin Gildea