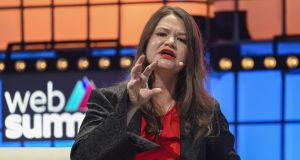 Brittany Kaiser, subject of the Netflix documentary, The Great Hack

Naivety, wilful ignorance, foolishness? How did a former US Democrat and humanitarian get sucked into the world of Cambridge Analytica? Brittany Kaiser, subject of the Netflix documentary, The Great Hack, reveals her involvement in the “behavioural change agency” and its role in the election of Donald Trump, Brexit and numerous other contentious political campaigns. Kaiser claims the company’s success was based on tactics of fearmongering, manipulation and illegality – she is also very keen to repeatedly claim her innocence throughout it all. Either way, it is a terrifying insight into the dystopian reality of big data. Enough so that I have deleted Facebook from my phone and refreshed security settings on all other applications. Phew! Brigid O’Dea

PEN International brings together writers of all kinds “in a common concern for the craft of writing, to give expression to their commitment to freedom of expression and to promote international goodwill among writers generally”. Although founded in London in 1921, its Irish branch didn’t really take off until 1934. A member of Irish PEN since 1974, JA Gaughan tells how it fought censorship, ensures writers get paid royalties, helps aspiring writers and so on. Since 1998 it has presented an annual AT Cross/Irish PEN Award, restricted to Irish writers. A major aspect of its work is on behalf of imprisoned writers worldwide. We learn much about Gaughan’s more than 40 years on its executive committee and his amusing and sometimes unpleasant experiences with well-known Irish figures make for interesting reading. Brian Maye

Where Power Stops by David Runciman

This book addresses the limits of the powers of presidents and prime ministers and whether their personalities or government structures explain their successes and failures. US presidents Johnson, Clinton, Obama and Trump and UK prime ministers Thatcher, Blair, Brown and May are the leaders considered. A central theme is that character is destiny – that the type of person the leaders are or were defined their political career. The individual chapter devoted to each leader is a well-written consideration of a biography or memoir of or by them but is questionable as a means of assessing how their personalities explain their successes or failures. Obama is deemed by far the sanest president of modern times – but was that why he achieved less than Johnson when we know that Johnson got important cross-party support for his great civil-rights reforms whereas Obama met with bitter Republican resistance to his proposals? Brian Maye

The Street by Ann Petry

When Lutie finds her young son on the street with a shoeshine box she slaps him: “White people seem to think that’s the only kind of work [coloured folk] are fit to do. The hard work. The dirty work.” Lutie wants better for her and her son. She believes in the American dream. But this story, set in New York’s Harlem, is not one of uplift. Instead, we watch Lutie, a woman “too good looking to be decent”, struggle amid the trammelling racist, sexist and class discrimination of her surroundings. The Street was first published in 1946 and was the first book by a woman of colour to sell over a million copies. As relevant today as it was prescient then, this edition includes an introduction by Tayari Jones, author of An American Marriage. Brigid O’Dea

How to Be Autistic

In her memoir, How to Be Autistic, author, Charlotte Amelia Poe, reminds us that there are many ways of being. All humans exist on a spectrum; the problem arises when we do not allow people the space to just “be”. After winning the Spectrum Art prize for her spoken word piece of the same title, Poe delves further into her personal experience to give us a visceral insight into living with Autistic Spectrum Disorder. The book bulges with frustration over misdiagnosis, inadequate care and ignorance, even malevolence, from those who should have been her allies, but it is threaded too with resilience, hope and indubitable strength. “You will wonder why nobody ever took a step back and actually looked at you,” Poe says, but rest assured that you have been seen. Brigid O’Dea

Reminiscent of the age-old saying, “wherever you go, there you are”, Bryan Washington writes, “You bring yourself wherever you go. You are the one thing you can never run out on”. Lead character, Nicolás, is going nowhere; he’s stuck. Stuck with his lot, crawling from lot to lot to deal drugs and engage in desultory sex. Lot is told with a tenderness that juxtaposes the brutality of the characters’ lives in a post-hurricane Harvey Houston. This book of interconnected stories explores race, poverty, drugs and queer-coming-of-age in a culture in which “the only thing worse than a junkie father was a f****t son”. Visceral and raw, Washington’s powerful stories are met with a beautifully delicate prose that reflect the fragility of life. A terrific read! Brigid O’Dea