Poem of the week: Eros

A new work by Padraig Rooney 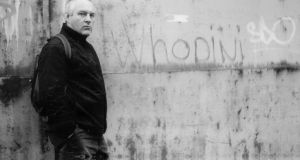 Brother Sheehy strikes a tuning fork to sound
the note and hold it quivering for us to hear.
It must be the summer at the end of sixth class.
A boy among the trebles is singing out of tune
and fidgeting. He’s new. We are on a rostrum
of some sort and I spot his Fruit of the Looms
above a snake-clasp belt as he leans forward,
the tan line of his shorts and the crack of his bum.
My voice has broken and I’m singing bass
and for the first time I know what it means to lust.
Sheehy sends him out to clean the blackboard
duster against the pre-fab wall. It thuds so near
my heartbeat thuds and fills the singing room.
Then Eros comes back in, covered in chalk dust.

Padraig Rooney lives in Basel, Switzerland. A bilingual selection of his poems Angelandet / Landing Craft was published in Zurich in 2017. He is also the author of The Gilded Chalet: Off-piste in Literary Switzerland