‘I’m grateful to the authors of shorter books, because my concentration is shot from the internet and all the coffee’ 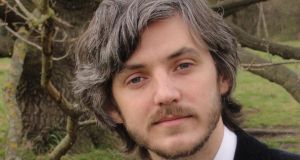 Rob Doyle: “I’m grateful to the authors of shorter books, because my concentration is shot from the internet and all the coffee”

Rob Doyle was born in Dublin, and holds a first-class honours degree in Philosophy and an MPhil in Psychoanalysis from Trinity College Dublin. His first novel, Here Are the Young Men, is published by the Lilliput Press. His fiction, essays, and criticism have appeared in The Dublin Review, The Stinging Fly, Gorse, The Moth, The Penny Dreadful and elsewhere. Having spent several years in Asia, South America, the US, Sicily and London, he lives in Rosslare, Co Wexford. Here Are the Young Men is reviewed by Peter Murphy in The Irish Times on Saturday, June 21st.

The Trouble With Being Born, EM Cioran; Out of Sheer Rage, Geoff Dyer; Nazi Literature in the Americas, Roberto Bolaño

“The essence of punk rock is having exemplary manners for your fellow human beings.” – Joe Strummer

I don’t know. But when I read Aidan Higgins’ Balcony of Europe, I wondered why everyone wasn’t talking about him all the time. After years abroad, I’m still catching up with contemporary Irish literature.

The little hardback of Bolaño’s Antwerp, or a book of paintings by Jack B Yeats.

It could be anywhere, any way, any time. Even after all the years, a clear system has yet to emerge.

JG Borges’ Fictions; Milan Kundera’s The Unbearable Lightness of Being; Geoff Dyer’s Yoga For People Who Can’t Be Bothered To Do It; Knut Hamsun’s Hunger.

23 years growing up in Dublin.

Probably Nietzsche’s On the Genealogy of Morals, because it cast everything I had been taught to believe into disrepute.

Some stone-cold classic with an edge, like Notes From Underground or Lolita. That way I’d get to corrupt the youth without the parents being able to say a thing.

A book on meditation, maybe. Or something mammoth and canonical, like Middlemarch, that I’ll never have the concentration for again.

Alienate everyone and die in a hail of gunfire.

It depends on how much a reviewer’s sensibility resonates with my own. I love reading (and writing) book reviews in general.

A big question. I’m just relieved to have had a book published in the format I love before such objects cease being produced.

I love the trend towards essayistic fiction – Coetzee’s later books, Teju Cole, Geoff Dyer, Milan Kundera, Michel Houellebecq and the likes. Novels which aren’t strictly faithful to the primacy of fiction, or which don’t even uphold a firm distinction between fiction and non-fiction. I like autobiographical novels, and books in which ideas have at least as much importance as character or plot. Also, I’m grateful to the authors of shorter books, because my concentration is shot from the internet and all the coffee.

Most of them. The others came by way of relationships or psychedelic plants.

The virtue of persistence.

Pretty much anything in Martin Amis’s Money, or the darts scenes in London Fields.

The “thunder word” from Finnegans Wake.

The man who, without warning, was blown into the air by an immense blast one August morning in Hiroshima. Bewildered and frightened, hoping to locate his family, he staggered across the countryside until he arrived, three days later, in his home city of Nagasaki...