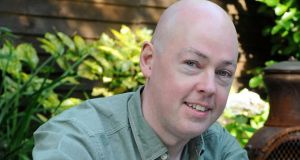 John Boyne: “Life is short; I feel no compunction to finish a novel that is boring me. I’ll read something else.” Photograph: Dave Meehan

John Boyne’s latest novel is Stay Where You Are And Then Leave. His new novel for adults – his first set in contemporary Ireland – will be published by Doubleday in September, titled A History of Loneliness. His version of James Joyce’s Araby has just been published by Tramp Press as part of Dubliners 100, a reimagining by contemporary Irish writers of Joyce’s classsic short story collection to mark the centenary of its publication.

Enid Blyton’s Noddy books. I wanted a Noddy outfit of my own. I still do.

The Silver Sword by Ian Seraillier. Frightening and eye-opening to the horrors of the second World War.

“Life is easy to chronicle, but bewildering to practice” – EM Forster, A Room With A View

I’m not sure if she’s under-rated but Deirdre Madden doesn’t always get the attention she deserves. She is easily one of our most accomplished novelists.

A limited edition hardback copy of A Widow For One Year by John Irving, signed for me by the author.

In recent years, I would say Hawthorn and Child by Keith Ridgway, which defies categorisation and is an extraordinary and experimental work of fiction.

I wrote half of The House of Special Purpose – the part that takes place in St Petersburg – in various rooms of the Winter Palace and the Hermitage one cold winter a few years ago. It was a wonderful writing experience.

When I was in my mid-20s, before I was published, Birdsong by Sebastian Faulks made me think about how to combine history with powerful story-telling.

The Secret History by Donna Tartt.

Ulysses. Then I wouldn’t still have it sitting on my shelf, staring at me, unread.

Read more than you write.

To revitalise sales of hardback novels, I would like to see a free download for Kindle with them, for people who travel a lot but like to have novels they have read on their shelves.

I’ve noticed a lot of debut novels that are so heavily influenced by the writer’s heroes that they come across as a bad imitation. Also, there seems to be a lot of novels about young boys who have suffered a trauma and end up in an institution.

That life is short; I feel no compunction to finish a novel that is boring me. I’ll read something else.

That I am at my happiest when I have completed a first draft of a novel and am about to begin a second.

Charles Dickens, Jane Austen, Oscar Wilde, John Banville and Ross O’Carroll Kelly. I imagine that would be a good laugh.

What A Carve Up by Jonathan Coe is easily the funniest novel I’ve ever read. Unlike most alleged comic novels, it actually makes the reader laugh.

Well I’ve written quite a number of them, but I’d quite like to write something about Paris as it entered the 20th century.

No Fixed Abode: Life and Death Among the UK’s Forgotten Homeless
Real news has value SUBSCRIBE