Books in brief: A fascinating portrait of Napoleon and the melancholy of life 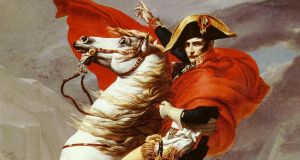 By Michael Broers
Faber & Faber, 560pp, £30
Broer’s second instalment of what promises to be a remarkable three-volume study is a fascinating portrait of a man caught between two worlds, a genuinely great but flawed individual who succeeded in forging “the future” from a clash between the past and the present. The author’s central contention, that Napoleon … truly was Hegel’s “spirit of the age”, is borne out by a narrative suffused with “the stuff of heroic legend … an epic more Wagnerian than Homeric”. Accounts of military campaigns are carefully woven together to recreate a brutal, increasingly apocalyptic drama that encompasses everything from the French campfires before Austerlitz – “one of the most moving spectacles of his spectacular life” – to the blizzard-swept battlefield of Eylau, where Napoleon “was visibly shaken by the … blood-stained snow”. Characters such as Josephine, Talleyrand, Fouché, Goethe and others move in and out of the emperor’s orbit and are vividly and insightfully depicted. The result is a balanced, immensely readable work that captures the essence of a man with “a genuine capacity … for optimism”. A tour de force of historical writing.

The Life and Tragic Death of Winnie Barrington

By Brian P Murphy
Papaver, €25
The origins of the Barrington family in Limerick, the building of the hospital named after them and their building of Glenstal Castle (now Glenstal Abbey) are traced. The involvement of members of the family in major 19th- and early-20th-century Irish historical events is outlined, thus providing a unionist perspective on these events. The main focus is on Winnie Barrington and especially her death in an IRA ambush near Newport on May 14th, 1921. Although living the typical life of a daughter of the aristocracy, she seemed at home with things Irish and was friendly with a local IRA leader, Michael Hayes, and his family. However, she and her family were also friendly with members of the crown forces, which led to her tragic death, at only 23, when IRA men ambushed the car of an RIC district inspector in which she happened to be travelling. Her death is “a tragic personal story” of the War of Independence and this book is a fitting monument to a short life well lived.

The Passage of Love

By Alex Miller
Allen & Unwin, £14.99
There is something elegiac about The Passage of Love, in its detailing of a vanished 1950s Melbourne, in the passion and urgency of its fierce protagonist, Robert Crofts, told from the perspective of the artist as an old man. The novel is autofiction, sitting on a continuum of memoir and creative non-fiction. Miller’s writing has the muscularity of decades-earned craft, spare and unsentimental, probing the sinews of marriage, delineating the arc of love affairs, of struggle and disappointment.

Set after the second World War, the themes are pertinent, asking whether art can take sides, if it has an obligation towards justice: “Those of us who have witnessed evil have a moral duty to teach the new generation to recognise it.” Ultimately, though, the questions are personal – what it means to create, to sublimate suffering and experience into art. What does it feel like, Miller asks, to be you? How is it possible to fully know another person? As the story unfolds, with a melancholy only the facts of life can provide, fiction evaporates, leaving at the end unadorned lines of truth.