Better the devil you know: The Life and Loves of a He-Devil by Graham Norton: A Memoir 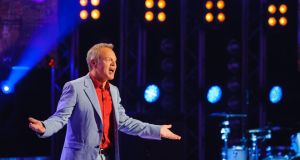 Graham Norton during filming of the Graham Norton Show for the BBC in London. Photograph: Dominic Lipinski/PA

Book Title:
The Life and Loves of a He Devil: A Memoir

It’s all too easy, and increasingly prevalent, particularly in the biographies of our sporting heroes, to use the stories of their life and times as a stick with which to beat all those who have, over the years, done them wrong. This is not one of those.

For a start, it’s obviously written by the man himself, without the help of a “ghost”. It is full of wicked asides, tart observations and sharp remarks that could only have only have originated in Graham Norton’s witty brain, which, unlike many another, is always engaged before the tongue is set in motion. And as ever, behind the roguish response, is a winning smile that takes the curse off any offence and a kindly, even gentle heart that never seeks to hurt.

Nor is this a paean to the greater glory of Graham, of his fame, his triumphs, his loves, his famous friends. In the well-worn words of Kipling, he “treats triumph and disaster just the same”. In his self-deprecating way, his failures, both personal and professional, are never shirked here.

Before you leap to the conclusion that this is some sort of old-pals act, I hardly know the man at all. As far as I’m concerned, he appeared out of nowhere about 10 years ago with a cheeky, campy Channel 4 TV show that created a buzz. I may even have made an appearance on it.

He has never asked me on to his current, wildly successful but considerably less outrageous BBC prime-time TV show, and why would he, up to his shoulder-pads in international superstars? We both broadcast on the weekends on BBC Radio Two, but the twain never meet.

I suppose in the eyes of the public our closest association would be over the Eurovision Song Contest. I had been presenting the magnificently awful thing since God was a boy for BBC TV and thought it was about time to give the viewing public a break.

The inspired, logical choice for my replacement was Graham. In the book, he tells of the rivalry between himself and Jonathan Ross for what was regarded as a plum role. Actually, every presenter and stand-up comedian in the country would have killed for the gig. Norton says my only advice to him was not to start drinking before song seven. He made it his own from year one – although I’m bound to say that the Bearded Lady who won this year, reducing Graham to tears, might have had a slightly different effect on me. I’ve always seen the Eurovision as a sometimes foolish farce, but not as a freak show.

One of the clouds on Graham’s valley of sunshine, however, is the “hate-filled”comments he receives every year when commentating on the song contest from his fellow countrymen and women, just because he refers to the UK entry as “we” and the Irish song as “they”. I should have warned him. As he says himself, “small minds thrive in small worlds”.

Norton found growing up in rural Ireland “suffocating”. He says his little life seemed to consist of ticking clocks, boiling kettles and drawn curtains. He couldn’t wait to get away. Nowadays, he can’t wait to get back, to his cottage in west Cork. The sign at Cork Airport that reads “Welcome Home” has a particular significance for Graham: “As I drive away, towards the west, I read it and know that it is speaking to me. I am home.”

New York is a different story: BBC America began to show his Channel 4 show and he recorded a show for the US audience. Two days later, the Twin Towers crashed down. The series was going to be called Graham Norton’s Big Apple Crumble. It never made it to transmission. A pilot for a major American network bit the dust, but our boy was having the time of his life; every night was party night. He made his way through a book of cliched jobs for gay men: actor, go-go dancer, interior decorator, air steward.

Nowadays, when he walks around the house he owns in the Big Apple, he realises that it was all a last, over-enthusiastic farewell to his fading youth.

The refreshing thing about this book is that Graham admits to far too many big nights out and bleary mornings after, but doesn’t, like Edith Piaf, regret a thing. He says he spent nearly 40 years getting to the point where he had cash in his pocket and a certain notoriety, and it seemed churlish not to enjoy it.

There’s no shying away here from the sticky patch he endured, having signed up to the BBC for big money, and found that nobody there was sure what to do with him. The tabloid press began to bay when Strictly Dance Fever flopped and The Bigger Picture failed to make waves. Then hallelujah!, along came Lord Lloyd Webber and How Do You Solve A Problem Like Maria?, and it all changed, changed utterly.

The tremendously successful Friday night show took off and the rest of the continuing saga of the life and loves of the self-styled he-devil will probably make another fascinating tale of a not-so-simple Cork lad who “took the blows and did it his way”.

By the way, he loves dogs – labradoodles, Jack Russells, terriers – and the animals have a whole chapter to themselves. It’s not all sweetness and light, though. Graham hates loud sneezing, grapefruit, beach holidays, vox pops, camera phones and the internet. But if you like reading about famous names, there’s a chapter here called “Divas” that will keep you going till Christmas.

I know that you’ll enjoy this entertaining book, but the only thing Graham Norton will be worrying about is the only thing that worries him about his TV performance: what will his mother think?

Terry Wogan presents Children in Need on BBC1 on Friday, November 14th. The Little Book of Common Sense: or Pause for Thought with Wogan (Orion) is published on November 6th.