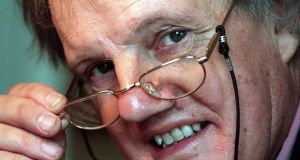 Jonathan Bardon wrote and presented many radio programmes, including the BBC series, and accompanying book, A History of Ireland in 250 episodes. File photograph: The Irish Times

Jonathan Bardon, the historian who chronicled the development of Ulster from the earliest times to the present day, has died, his family has said.

He was 78 and had been suffering from lung cancer.

His best-known work, the 800-page A History of Ulster, which was published by Blackstaff Press in 1992, charted its history from pre-history to the establishment of Northern Ireland and the outbreak of the Troubles.

“We remember Jonathan with great fondness at Blackstaff and we are enduringly proud to have been his publisher,” she said. “Our sincere condolences go to his family and friends.”

The South Belfast MP, the SDLP's Clare Hanna, said she was saddened to hear of Mr Bardon's death, who she said had been a friend and neighbour of herself and her parents for decades.

"His History of Ulster and his History of Ireland in 365 episodes, which was broadcast on Radio Ulster every evening for a whole years were quite breathtaking in their historical depth and reach and even-handedness and are essential reading for anyone who wants to understand the history of this island," she said.

"I first met Jonathan in 1991 when he worked with my father and others in writing a drama to celebrate the founding of the Society United Irishmen in Belfast, which was staged in Elmwood Hall on the exact bicentenary, 14 October 1991.  It was a brilliant work and was a life-long influence on my thinking," she said.  Thank you, dear Jonathan, and may your gentle soul rest in peace."

Born in Dublin in 1941, Jonathan Bardon was educated at Trinity College, Dublin, and Queen’s University, Belfast (QUB), and has lived in Belfast since the 1960s.

He took up his first post as a history teacher at Orangefield Boys’ Secondary School in east Belfast in 1963. He subsequently went on to become a lecturer at the Belfast College of Business Studies – now Belfast Metropolitan College – and the School of History at QUB.

Among his other works of history were Belfast: A Century (Blackstaff Press, 1999) and The Plantation of Ulster (Gill & Macmillan, 2012).

His most recent book was A Narrow Sea: The Irish-Scottish Connection in 120 Episodes, was published by Gill Books in 2018.

As a broadcaster he wrote and presented many radio programmes, including the BBC series, and accompanying book, A History of Ireland in 250 episodes.

He also contributed to The Irish Times’ coverage of the release of State papers.

He is survived by his wife Carol and children Jane and Dan.