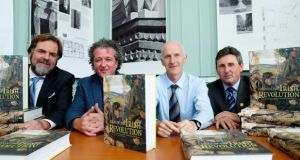 Atlas of the Irish Revolution, a book which tells the full story of Ireland’s revolutionary history from 1913 to 1923, has been voted the Bord Gáis Energy Book of the Year for 2017. It was chosen by a public vote from the list of category winners announced at the recent Irish Book Awards.

The atlas has nearly 1,000 pages, weighs 5kg and costs €59 but after the initial print run of 8,000 sold out in September, publisher Cork University Press ordered another 14,000 copies to meet demand ahead of the Christmas present rush. Diarmaid Ferriter’s review in The Irish Times called it “mammoth and magnificent”.

Dr John Crowley, one of the books editors, from the Department of Geography in UCC who worked alongside Donál Ó Drisceoil, Mike Murphy and associate editor John Borgonovo on the Atlas of the Irish Revolution, said: “We are very honoured to receive this award. The 1916 centenary clearly revealed not only Irish people’s appetite for understanding their history but more importantly their place in that history.

“The Atlas of the Irish Revolution builds on that sense of connection and public engagement by providing new ways of seeing the revolutionary period. The 300-plus maps in the atlas along with the hundreds of other images create a unique portal through which local communities can engage with pivotal events in their own history. The atlas speaks to a deep interest amongst Irish people in learning about their past and we are indeed grateful that they have supported this project in such vast numbers.”

The atlas was conceived as a definitive resource that brings to life this pivotal moment in Irish history and nation-building. It draws together existing and ongoing research into the revolutionary period in a broad ranging and inclusive manner. It also includes contributions from leading scholars across a range of disciplines.

A chronologically and thematically organised treatment of the period, the book contains an analysis of conditions in the provinces, counties and parishes, telling the stories of particular individuals and families caught up in the events of these years. It also includes sections on the evolution of the revolution, and on its aftermath, legacy and the collective memory and cultural representation of this fascinating, transformative period of Irish history.

Now in its 12th year, the Irish Book Awards were founded to celebrate and promote Irish writing to the widest range of readers possible. Each year it brings together a huge community passionate about books – readers, authors, booksellers, publishers and librarians – to recognise and celebrate the very best of Irish writing talent. Previous book of the year winners include Solar Bones by Mike McCormack, Asking for it by Louise O’Neill, Academy Street by Mary Costello, Staring at Lakes by Michael Harding, The Spinning Heart by Donal Ryan and Solace by Belinda McKeon.