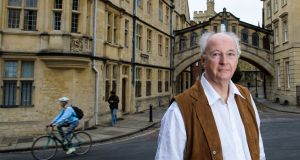 Twenty-two years after the publication of Northern Lights, Philip Pullman returns to the epic parallel world of His Dark Materials in La Belle Sauvage, the first of three volumes of The Book of Dust.

While Pullman described The Book of Dust as neither a prequel nor a sequel but an equel to His Dark Materials, it reads as a prequel. La Belle Sauvage, set 10 years before Northern Lights, is the story of how Lyra Belacqua, the future heroine of His Dark Materials, came to live with the scholars of Jordan College, Oxford.

Jules Zanger argues that fantasy is a genre that exists in a symbiotic relationship with reality, depending on it for its existence but at the same time commenting upon it, criticising it and illuminating it. Like its predecessor, La Belle Sauvage is a work underpinned by Pullman’s concern with religion, science and politics.

As a work of fantasy, La Belle Sauvage is concerned with the dehumanising consequences of surveillance and conformity when imposed or wielded by states or religions for the usurpation of power. Its depiction of the Consistorial Court of Discipline, the most powerful and brutal arm of the Magisterium, and analogous to real-world church structures, is evidence of its political engagement.

Part One of La Belle Sauvage, entitled “The Trout”, engages in necessary and relatively minimal recapitulation. The relationship between Lord Asriel and Mrs Coulter (Lyra’s parents) and the dictatorial power of the Magisterium, along with the mysteries of Dust, the symbols of the alethiometer, and the nature of dæmons, are all introduced or reintroduced to readers within the first few chapters.

Significantly, however, Pullman’s stated aims in writing His Dark Materials – to challenge theocracies and nostalgias for childhood that refuse to say anything positive about growing up, that would try to extinguish the irreducible human capacity to, and need for, wonder – move lightly beneath the surface of La Belle Sauvage.

Pullman, it seems, has also taken the opportunity afforded to him by La Belle Sauvage to redress what numerous readers saw as shortcomings in His Dark Materials. The almost universal depiction of the clerics of the Magisterium in His Dark Materials as pantomime villains bereft of pathos will now be read alongside a character like Sister Fenella: one of the nuns of the priory at Godstow, whom Malcolm loves with “a deep and uncomplicated devotion”.

Layers of complexity have been added to other elements of the tale: the nature and mythology of dæmons is expanded, so that readers learn of their abilities to mix and match attributes when young or become an entirely new animal; Mrs Coulter, a character arguably more ambiguous than complex in His Dark Materials, gets to inhabit more confidently the role of La Belle Dame sans Merci.

The first volume of The Book of Dust begins less dramatically than that of its predecessor – who can forget the courageous and concise opening line of Northern Lights: “Lyra and her daemon moved through the darkening Hall, taking care to keep to one side, out of sight of the kitchen”.

The first lyrical sentence of La Belle Sauvage, which runs the entire length of the first paragraph and foretells of slower scene-setting expository chapters, is the work of a storyteller who has been freed from the construction of the immense philosophical framework that underpins the tales – and that, arguably, had a detrimental effect on The Amber Spyglass, the third volume of His Dark Materials.

The passages that chart Malcolm’s confused feelings for Alice are among the most sensitively and intelligently rendered in La Belle Sauvage.

Set in Pullman’s alternative Oxford, La Belle Sauvage introduces readers to a memorable 11-year-old protagonist, Malcolm Polstead, who works in his family pub, The Trout, which is situated on the banks of the Thames in Godstow, three miles outside Oxford. Intelligent and curious, Malcolm inadvertently, at least at first, finds himself caught up in a mystery that involves the infant Lyra, who is under the protection of an order of nuns at a nearby priory.

After finding a secret message lost by a stranger, Malcolm is quickly drawn into a world of political and religious espionage. He joins a group of rebel scholars, part of a movement known as Oakley Street, which is dedicated to challenging the Magisterium. When a catastrophic flood of biblical proportions hits Oxford, Malcolm is forced to take upon himself the role of Lyra’s protector. With the help of Alice, a slightly older girl who worked with him at The Trout, he attempts to navigate Lyra to safety in his canoe, La Belle Sauvage.

Like those that recount the burgeoning attraction between Lyra and Will Parry in His Dark Materials, the passages that chart Malcolm’s confused feelings for Alice are among the most sensitively and intelligently rendered in La Belle Sauvage.

It is in this second part of the text, aptly entitled “The Flood”, that La Belle Sauvage gains momentum and comes into its own, becoming as much thriller, adventure story and Bildungsroman as it is fantasy.

Of particular note is Pullman’s concern for psychological realism – to use his term – in the development and presentation of character. As Malcolm and Alice attempt to ferry Lyra to safety they are pursued by George Bonneville, one of the most terrifyingly, disturbingly, yet masterfully, drawn villains in children’s literature.

Pullman’s ability as a storyteller, however, to draw on a vast array to literary sources – his dark materials, so to speak – to create new worlds is not only mesmerising to behold but also arguably his greatest skill as a writer.

His Dark Materials is a work influenced by Romanticism: John Milton and Paradise Lost (the Romantics’ foremost precursor poet and poem), the works of William Blake, particularly Songs of Innocence and of Experience, and Heinrich von Kleist’s On the Marionette Theatre all underpin Pullman’s writing.

While his Blakean vision and Keatsian trust in the creative power of the imagination (of story, even) are still in evidence in La Belle Sauvage, Pullman turns to new sources, including Greek and Celtic mythology, the Bible and The Faerie Queene, to shape a narrative that is as lovingly crafted as Malcolm’s canoe: La Belle Sauvage.

Pullman’s thrilling tale, which charts Malcolm’s journey of discovery and self-discovery, will whet the appetites of readers for the next two volumes of The Book of Dust: “Well may [. . . he] speede and fairely finish [. . . his] intent”.

The Goop Lab: One episode is about the vulva. I’ll probably watch that with my parents
5