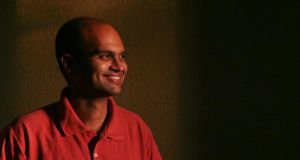 Aravind Adiga: writes about instances of immigrants, who are awaiting deportation, opting to kill themselves. Photograph: Manoj Patil/Hindustan Times

In his latest novel, the Booker Prize-winning writer Aravind Adiga posits a moral dilemma – what’s a citizen’s duty to the state that grants him none of the rights? In the context of escalating xenophobia and current right-wing politics of the West, Amnesty could not be more pertinent.

Danny is an illegal Sri Lankan immigrant who works as a cleaner in Australia. He has managed to carve out a decent life for himself despite his precarious status as an illegal citizen but his carefully curated sham threatens to unravel when one of his clients is murdered. Danny inadvertently becomes embroiled in murder since he possesses crucial information about the killer. This kicks off a cat-and-mouse chase, involving the alleged murderer threatening to take Danny to the authorities and Danny vacillating between his civil obligation to report a crime and risking deportation.

Adiga palpably evokes the nagging, deep-seated feeling of constantly being scrutinised as an “other” in a foreign country. Blending in the crowd and ensuring that nothing incongruent piques the locals’ suspicions are key tools in every immigrant’s arsenal. Danny achieves the balance respectively by giving his hair golden highlights and only listening to English songs, nothing Tamil while on duty.

In a foreign land, even people who share your skin colour are a threat. Danny’s experience is that usually brown “legal” migrants are the ones he needs to be wary of, since they are quick to use his illegal status for leverage in their bid to exploit him. “Easiest thing in the world, becoming invisible to white people, who don’t see you anyway; but the hardest thing is becoming invisible to brown people, who will see you no matter what.”

The plot is tautly written but not as charged as it needed to be. Also, a fair bit of levity was found wanting which could have resulted in a more engaging narrative.The storyline had potential to be propulsive but instead focused on monotonous interactions between the murderer and Danny which quickly turned tedious. The second half of the book is comprised entirely of the character’s inner monologue, interspersed with phone calls from the killer which makes the plot lose steam.

Where Amnesty thrives is in underlining the myriad predicaments afflicting immigrants. Adiga writes about instances of immigrants, who are awaiting deportation, opting to kill themselves instead. Danny’s conundrum highlights how while “rule of law” is Australia’s badge of honour, it is an immigrant’s Achilles’ heel. The plot draws attention the umpteenth academic scams rife in the Third World that promise a secure future and quality college education abroad but instead exploit whatever meagre financial resources the students manage to whip up, leaving them stranded in an alien country under perilous circumstances.

An issue I had with the writing was a minor but consistent anger towards Muslims harboured by the protagonist. He ironically bemoans the fact that Muslims as a minority get more attention for being the dangerous ones whereas others get overlooked. While cleaning, Danny finds a book on Islamic law and wonders why white people never read books about Hindu law. He suspects that has to do with them being obsessed and frightened of Muslims.

Danny’s illegal status denies him basic privileges so a certain hostility for other immigrants who have it easy is expected from him but I still detected a faint whiff of Islamophobia in the representation of his character which came off as distasteful, even if intended in an ironic vein. Danny recounts his surreal experience of encountering three Arab men in a Muslim mansion brazenly smoking sheesha as “the dirtiest thing he had seen in Australia”. In another instance Danny complains about a blind Malaysian guy whom Aussies gave a permanent residence after running an online signature campaign because he is Muslim. That is followed by an off-colour quip about how “there are Tamil men burning themselves alive”. While excessive political correctness is rightfully seen as robbing a writer’s prerogative of freedom of speech, that does not warrant depicting characters that, even if sardonically, pander to the rampant racist stance against Muslims that is now prevalent globally. It would have been justified if Danny’s views were disputed in the narrative with the same acerbity.

The writing tends to fall apart when it turns expository. Arab men are described as “exhaling sultanish smoke” and the alleged murderer is described as being darker than whites and lighter than blacks followed by the absurd turn of phrase “Everything in the room was evolving towards him”. Why skin colour is relevant to evolution here is anybody’s guess.

What makes this book a necessary read is its powerful portrayal of the immigrant experience. There are glimpses of Adiga’s trademark lacerating wit but they are few and far between. He reprimands the attention-hungry social workers whose goodwill is akin to giving you a chocolate bar as you were being handcuffed. “White people would be lecturing you on your rights all the way to the deportation vehicle.” Amnesty is a vital human story for our times about morality and justice which gives enlightening insight about the plight of immigrants.