Alvy Carragher: ‘I try to take what is broken and make it into something beautiful’

The poet traces the roots of her gift, from reciting poetry before she knew what it meant to reading her mother’s secret poems and seeking out poets who told the truth 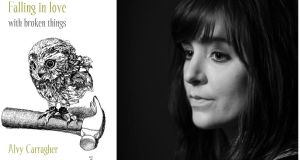 Alby Carragher, author of Falling in Love with Broken Things: Poetry is the only way I can find to pull together the wealth of human experience. A tool to help prise out some meaning. It would be easier to just live, but if you have been given an eye for unsolicited meaning in everything – then I think you have to use it 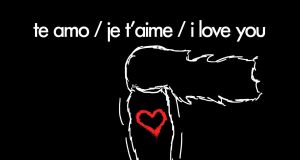 Alvy Carragher on Falling in Love with Broken Things: You could read it like a child and distract yourself with the images, or the innocence; but if you read closer, if you think about what the poems mean, you will find something raw and sad there. Something true

I went to one of those tiny country schools that city people find it hard to believe in. Gortanummera National School was not only one of the oldest, but also one of the smallest schools in the country. At last count, there were about 24 of us, and a family leaving the school might have threatened its closure. There were two classrooms, and in the senior classroom, from the ages of seven to 12, we were indoctrinated into the world of verse. I don’t remember learning much else; there were some questionable lessons in algebra; truth or dare; and a recurring farm safety video that I wish I could forget.

We had one teacher who was set to retire. She had lost any sort of interest in really teaching, but she loved to hear children recite poetry. So that’s what we did. We learned off poems, stories, prayers, songs … anything with some beauty in the words, anything that she could happily sit back and listen to. She was fussy, too – nobody passed reciting Old Woman of the Roads without putting their heart and soul into “Och, but I’m weary of the mist”. The emphasis was on the “Och”, and as a shy eight-year-old, that dry, guttural sound was an infuriating hurdle. Her real loves, though, were Kavanagh and Heaney. Long before I had any idea what any of it meant, I could recite them by heart, and I think in a way the rhythm of that, the intimacy with it before I had any real clue what any of it meant, has influenced me in so many ways.

Later, the understanding came. I would see my mother’s poems folded into the backs of books. Never published, never read by anyone but her nosey child, and it was clear to me that this was the only way you could tell the truth. This was how a woman who held it together, and pretended things were okay, kept her secrets. I became fascinated by the kind of truth that seemed only to show up in poems. And as a result I became obsessed with any poet willing to tell the simple truth. And it grew and grew: secondary school brought the sadness of Plath, and later came Philip Levine, Galway Kinnell, Margaret Atwood, Elaine Feeney, Sarah Clancy and countless others. All united by a simplicity of language. All united by a feeling of truth.

And that, I suppose, is what I try to do in this collection. To tell the truth or my version of the truth. To take what is broken and make it into something beautiful. There’s something in the human condition that drives us to poetry. It seems poetry finds its way into everything: my parents’ divorce and their bad marriage, into rape or heartbreak or love, into death.

Poetry is certainly part of a culture so well versed in goodbyes. These poems span different continents, all the places I have known and watched the people I love leave for. Poetry is the only way I can find to pull together the wealth of human experience. A tool to help prise out some meaning. It might be easier to just live. Sarah Kay’s poem, Useless Bay, where she wishes she didn’t see everything as a metaphor, is a beautiful example of this desire. It would be easier to just live, but if you have been given an eye for unsolicited meaning in everything – then I think you have to use it.

This is my first collection and I think Falling in Love with Broken Things is about growing up in a world that is essentially broken, from natural disasters right down to our fundamental relationships, and somehow you have to live anyway, to find something to love in it. In The Carpenter’s Daughter, I try to grasp at this – the idea that you can take something broken and make it beautiful. And surely that is the point of poetry. In all of my favourite poems, that belief in the beautiful is there. That kind of truth, that building up of what has been broken down.

te amo / je t'aime / i love you by Alvy Carragher

sits in the sawdust heap, because it smells
just like her father, all warm dust and work

sweeps wheelbarrows of it out from under saws,
the scent of steel, the blade still above her head

pulls planks bigger than her across the room,
wants to know how to fix a shelf, or sand a chair

she loves most what wood can become,
rubs the blisters on her soft hands

they’ll turn calloused like his carpenter’s skin,
a small sacrifice, to be the one, to make

a new world from that which has fallen,
sliced from the sky to never see it again

she has the gist, but not the knack,
the gist is building with bravery

to take a tree stripped of all its dignity,
then put it back together tenderly

This is a collection about finding your way in the world, about growing up, about crossing that weird threshold into adulthood. About those strange, unspoken tensions of childhood, the peeks you get into the hurt and betrayal of adults’ worlds. I put that everywhere in my poems, some unspoken darkness. You could read it like a child and not see it at all – on one level – and distract yourself with the images, or the innocence; but if you read closer, if you think about what the poems mean, you will find something raw and sad there. Something true.

Alvy’s first collection Falling in Love with Broken Things will be launched by Salmon Poetry on Monday, June 13th, at 6.30pm, at the Irish Writers Centre. The video was animated and created by Stephen Murphy of City Absurdia Productions (cityabsurdia.com)

Fontaines DC: ‘We’ve no licence to speak for Ireland’
5