Alan Moore: V was for Vendetta. Now E is for Epic

The author of ‘Watchmen’ has spent 10 years on ‘Jerusalem’, a time-twisting behemoth set in the deprived areas of his youth 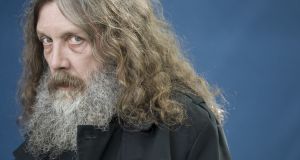 Alan Moore: “It seems what publishers took from a work like Watchmen was that comics sell better if they’re difficult to understand, and violent and grim and more sexually explicit.” Photograph: Colin McPherson/Corbis via Getty Images

It’s hard to overstate Alan Moore’s influence on pop culture. Most famous for writing the genre-defying comics Watchmen, V for Vendetta and From Hell, Moore has also recorded seven albums, performed numerous live art happenings and run an underground magazine. He’s even been a practicing magician for the past two decades.

After splitting from comic book titans DC and Marvel (the comics industry, he laments, has increasingly become “a pumpkin patch for growing movie franchises”), Moore (62) has spent the better part of the past decade working on his second novel. Jerusalem is a 640,000-word modernist masterpiece set almost solely within the Boroughs, the half-mile patch of his native working-class Northampton.

Moore attributes some part of the novel’s length to no longer having an artist to fill the gaps.

“I suspect it will read very much like someone who has been working for many years in comics, suddenly doing something without an illustrator,” he says. “Everything has to be described. You can’t rely on an artist to put things in the background. You have to tell the reader everything or that thing does not exist. In this way, I think Jerusalem is a very graphic novel.”

It bears repeating this is a very big novel. If pocket Bibles can stop bullets, it’s fair to presume that a hardback Jerusalem could repel an anti-tank missile. But it is also gigantic in ambition: a fantastical history of a small part of England, weaving the reader back and forth in time over a millennia of events, from the miraculous to the mundane.

We encounter scores of characters, from medieval pilgrims and angelic apparitions to characters such as Oliver Cromwell, Dusty Springfield and, in one bravura chapter, James Joyce’s daughter Lucia, who spent the last 30 years of her life in a Northampton mental institution.

Written in what Moore self-deprecatingly calls a “sub-Joycean” style, the Finnegans Wake-style prose of the Lucia Joyce chapter is a stunning tour de force. Its conception was intense.

“The prime thing it taught me,” Moore says with a chuckle, “was ‘never do that again’. Writing that was what led me to take 18 months off to do the underground magazine Dodgem Logic, just because I was exhausted intellectually after that chapter. And it still isn’t a patch on Joyce. It was only ever going to be a distant approximation of Joyce’s language, but it’s still probably the most accomplished piece I’ve managed.”

Jerusalem’s more lofty allusions are grounded by the modern drama, the working-class angst and economic deprivation of 2006 Northampton, of pound shops and job centres and social inequality, depicting characters struggling through unemployment, drug use and societal dead ends . Despite its long gestation, these themes of underprivileged and depressed communities remain strangely prescient 10 years after Moore began writing.

“When I started this book in 2005, before the financial collapse,” he says, “I had no idea what kind of world it would be when I finished it. You can only trust your instincts that the thing you’re doing will be timely.”

Moore’s work has a curious habit of taking on a semblance of prophecy, such as the mask of V, the anarchist vigilante and terrorist in the V for Vendetta series he wrote with artist David Lloyd, which has been adopted by hacktivist group, Anonymous. There is also the smiley face logo he and artist Dave Gibbons adopted for Watchmen, which later took on a second life as one of the chest-adorning T-shirt icons of the UK’s late 1980s acid house movement.

“There is something eerie about it,” he acknowledges. “The boundary between fact and fiction seems incredibly porous. I’m not sure myself if we sometimes get into what’s coming up, or whether it is the other way round; our ideas get out of us and actually escape to make that future. Anyone’s guess.”

The oft-proclaimed greatest ever comic writer is, he says, coming to the end of that part of his career. “Well I’ve gotten very distant. Generally, I’m moving away from comics. I’m enjoying the work I’m doing, but there’s probably 200-250 pages of that before I won’t have anything planned.”

This news is surprising, considering his recent statements about the industry that made his name, and which he, Frank Miller and Neil Gaiman helped elevate 30 years ago.

“At that time, comics were completely ignored and disregarded as a field for serious narratives,” he says. “There were a few precious things, but nobody seemed to be particularly aware of them, apart from that relatively tiny number of people who were interested in comics as an art form.”

Watchmen (1986-87), Moore’s most famous work, was a big reason why this attitude changed. A dystopian, real-world exploration of the realities and psychologies of an imagined superhero team, Watchmen is often called the greatest comic book ever written. By turns the ultimate expression of superhero comics and a scathing indictment of them, it was written with a clockwork brilliance. Watchmen now features on college courses internationally.

For his part, Moore wishes it had other effects on the medium.

“I assumed that having done Watchmen, it would suggest there were different possibilities for comics, genuinely new ways of conducting a comic story, that people would respond to and start doing brilliant, exciting stories of their own. But throughout the mainstream industry, it seems what publishers took from a work like Watchmen was that comics sell better if they’re difficult to understand, and violent and grim and more sexually explicit.”

Moore is particularly scathing of the various movie adaptations of his works. Despite lavish and lucrative offers relating to his filmed works, he has insisted his name be removed and all the money divided among other artists involved.

“People weren’t doing things for the medium itself,” he charges. “They were more interested in coming up with a character or a concept that might translate to the movies and make them a lot of money.”

Moore says all culture has fallen into the trap of recycling old, safe works from the past.

“It seems to me, that after skipping hurriedly through the 1950s, ’60s and ’70s, with our automotive tail fins that looked like rocket ships, with our science fiction, we were hurrying through those decades trying to get to this promised Jetsons future. And around 1990-95, when the internet was starting to become a reality, we realised the future had arrived and we had no idea what culture would be appropriate to this new era.

“Culturally, we decided to mark time. We marched on the spot. We recycled the culture of the previous eras that we were most comfortable with. I’d say that in cultural terms, the 21st century hasn’t started yet.”

In praise of ‘The Wire’

Still, there are exceptions. Moore praises the comedy of Stewart Lee (“certainly to my mind probably the most brilliant, progressive comedian the country has ever seen”) and his favourite television show, David Simon’s crime epic The Wire (2002-08) features in Jerusalem.

“The reference was made, not just because I was a fan, but because I could see similarities,” he says. “If you’re talking about an impoverished community, which we both were, then if you’re intelligent you realise how big the story is in these little, neglected areas, how much space you need to tell that story competently, without editing out any of the most interesting stuff.

For Moore, the boundary between novel and television serial makes little difference when the terrain is the same, with undiscovered riches ready for exploration. The length of a book such as Jerusalem or a box-set such as The Wire becomes a feature and not a bug.

“When we unpack these impoverished and disenfranchised places,” he observes, “it’s always a surprise how much is in there.”

Jerusalem is published by Knockabout Press.