A young Dublin feminist who prefers poison to piano

Review: The Coroner’s Daughter is a gory, frenetic but tongue-in-cheek murder tale set in 1816 Dublin 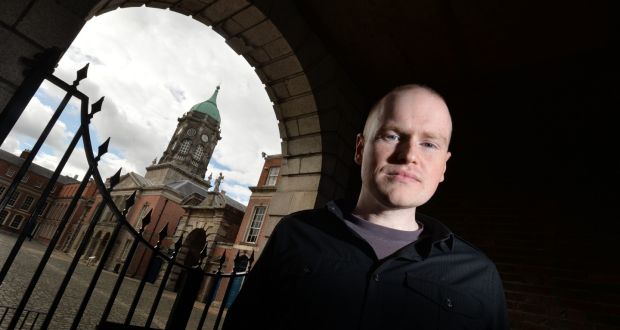 “For my eighteenth birthday, Father promised me the hand of a handsome young man, which he duly delivered mounted in a glass bell-jar.”

From the opening line of his engaging second novel, Andrew Hughes takes a tongue-in-cheek approach to the historical fiction genre. Abigail Lawless, the plucky female narrator of The Coroner’s Daughter, is no ordinary social debutante. The only child of a Dublin coroner, Abigail is more interested in learning about poison than practising the piano. While her friends paint landscapes of Fitzwilliam Square and vie for the attentions of eligible suitors, Abigail absconds from her music lessons to investigate mysterious murders across the city.

A woman before her time, Abby is a burgeoning feminist who has been encouraged by her father throughout her life to expand her mind: “It had been a principle of his, as far as practicable, not to deny a request from his daughter that he would have granted to a son.”

Inspired by her father’s profession, Abigail’s interest in science starts at a young age. Hughes has great fun with the implications. Her father gives her an anatomy lesson with offal in the kitchens of their house in Rutland Square: “Back then, I merely enjoyed the slimy feel. My chin barely cleared the table-top, and my fingernails were caked in gore.”

As a young woman, Abigail’s interest in the morbid doesn’t wane. When her father’s assistant Ewan Weir cautions against the gruesome depictions in George Edward Male’s Epitome of Juridical or Forensic Medicine, Abigail informs him that she has read the text multiple times. The banter between the pair brings humour and light romance to the otherwise grisly plots.

Death of a housemaid

Set in the dreary Dublin of 1816, the year without a summer, the story focuses on the death of a young housemaid, Emily, who conceives a child out of wedlock and allegedly kills both her baby and herself. While Abigail’s father carries out the autopsy, his ever-curious daughter discovers a note from a lover that implies foul play.

This sets her on a journey across an atmospheric Dublin, from the creepy corridors of the Rotunda hospital at night, to working-class Capel Street, to the gentrified houses of Fitzwilliam Square. With its mix of classes and settings, and its spotlight on the world of pathology, there are strong echoes of the first Benjamin Black novel, Christine Falls.

Hughes’s Dublin is more than a century older, however, with the plot centred on a puritan religious group known as the Brethren. The members of the order, which includes an Association for the Discountenancing of Vice, believe themselves superior to ordinary Catholics and seek to convert the public by winning influential members of society to their ranks. Hughes vividly evokes the power that preachers such as Mr Darby have over the more vulnerable echelons, and the insidiousness that often lies beneath such outward shows of piety.

Judges, newspaper editors and the police all conspire to keep the sins of the Brethren under wraps. It is up to Abigail to try and uncover their secrets, aided by Ewan and by her science mentor, the fervent atheist Professor Reeves. The age-old battle of science and religion is a central theme, with Hughes finding comedy in the beliefs of the time, not least through Abigail’s anonymous letters to the Royal Society journal.

As Abigail travels around the Pale in search of the truth, there is so much action that the reader has little space to reflect on the twists. The climax feels rushed, but the heroine’s voice is so engaging that these minor issues with pacing do not detract from the whole. Mixed into the amateur sleuthing is Abigail’s personal journey as an impetuous young woman. Her voice is reminiscent of the narrator of Shirley Barrett’s excellent debut, Rush Oh!. Both are courageous, intelligent and relate their positions in society with sardonic humour.

The lesson Abigail needs to learn, as her father eloquently puts it, is “to understand that people were fragile things, not to be easily analysed or explained, especially in their capacity for pain”. His opinion is particularly poignant given the loss of his wife.

The author’s eye for detail works well to bring the historical era to life. Abigail huddles in a carriage in her “fur-lined pelisse”. The southside of Fitzwilliam Square is entirely unbuilt, “giving the current residents a fine view towards the Dublin Mountains”. People in the city centre shelter from the rain under “the granite plinth of Nelson’s Pillar”.

Hughes, a historian and archivist, is well placed to comment on 19th-century Ireland. His social history Lives Less Ordinary (2010) studies the inhabitants of Fitzwilliam Square from 1798 to 1922. His research inspired his acclaimed first novel, The Convictions of John Delahunt (2013), based on a real-life murder in Victorian Dublin.

A similarly gory blend of historical detail and fiction has resulted in a compelling second novel. The Coroner’s Daughter is good old-fashioned storytelling that will keep readers turning the pages as the shadows begin to fall.