A war hero who could not face the truth

Anita Leslie’s WWII memoir is considered the best book about the war by a woman, but her bestselling biographies and memoirs sugar-coated the truth 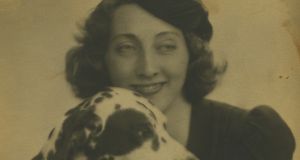 Anita Leslie. The biographies and memoirs which she wrote ignored unpleasant and disturbing facts.

The second World War gave Anita Leslie a new life but the peace that followed, with its anxieties and dislocations, came close to destroying her. She was born in 1914 and was, in some ways, a typical daughter of the Anglo-Irish landowning classes – badly educated, horse loving and with a sparkling sense of fun. In other ways, she was an oddity; her father, Sir Shane Leslie, had renounced his inheritance and the Ulster Protestant values of his family to become both a Catholic and an Irish nationalist. He and his American wife, Marjorie Ide, were also perhaps unusual in their neglect and lack of interest in their children.

Shane’s religious conversion wasn’t as embarrassing to his parents as one might have supposed for, as Elizabeth Bowen pointed out, their class had a gift for “not noticing”. Anita inherited this trait and the biographies and memoirs which she wrote ignored unpleasant and disturbing facts. “That book is full of things I don’t say,” she confessed about the sugar-coated biography of her cousin Winston Churchill’s monstrous son Randolph but it was true of all her books. Her lives of her chancy great-grandfather Leonard Jerome, the reckless speculator Moreton Frewen, her sexually voracious great-aunt Jennie Churchill are suffused in a rosy glow.

In 1940, Anita enlisted in the Mechanised Transport Corps to train as an ambulance driver. In her war memoir, Train to Nowhere, she wrote, “How lucky I was to be husbandless, childless, unloving and unloved”. A melodic sentence but not a truthful one. Her reason for joining the war effort was to at last escape the husband she had spent years trying to leave. He was Colonel Paul Rodzianko CMG, a dispossessed Russian, nearly 35 years older than Anita. He had no intention of giving her a divorce, since she usefully wrote his memoir and manuals on horsemanship, which Paul published under his own name. In her letters, always more honest than her books, she wrote, “Only I could invent this way of running away from a husband”.

More happened to Anita in wartime than she admitted in Train to Nowhere, the most sombre of her books, published in 1948 and considered at the time to be the best book about the war to have been written by a woman. It doesn’t mention that Paul pursued her in all her postings – South Africa, Libya, Syria, Lebanon, Palestine and Italy – and that she only managed to shake him off when, in 1944, she joined the 1st French Armoured Division as an ambulance driver and played a vital part in the liberation of France. Nor does she mention the exhaustingly tangled love affairs which clouded her time in the Middle East. The book concentrates on a Europe in ruins and bloodshed, where Anita saw men “advancing through the fields suddenly blown up in a fountain of scarlet snow”.

What Declan Kiberd called “the tragedy of irrelevance” that beset the Anglo-Irish had, perhaps, made Anita long for relevance. In Train to Nowhere she wrote of having “a faint selfish hope that war would not end before I had time for some startling achievement”. By the end of the war, Anita had become the only woman to have won the Croix de Guerre twice, for bravery on the battlefields of France, as well as the Desert Star. She could hardly have asked for more relevance.

But, as Kurt Vonnegut wrote, “People don’t recover from a war” and, for years afterwards, Anita didn’t. Back in a sleepy, sluggish Ireland, she mourned her lost life of comradeship, loyalty and an energising intensity. In anguished letters to her friend Rose Gardner, she talked about “the utter futility and nerviness of everything”. There were half-hearted suicide attempts, unwise involvements, all regarded, not least by Anita herself, as awkwardnesses to be “not noticed”.

Like many of her courageous generation, she found it too painful to talk about the war and, after writing Train to Nowhere, she didn’t mention her wartime life again until, in 1983, she produced a cheerier version of the memoir in which the grisliest episodes were excised. By that time, she was contentedly married to Commander Bill King, her equal in unflinching valour, and had become a successful biographer, playing a lively game of make-believe on behalf of her subjects. Lack of revelation aside, her books are captivating. People are placed convincingly in the world around them; their way of life larkily scrutinised.

Anita insisted on everything being “delightful and amusing”. So as not to sound like a professional author – she loathed the words “professional” and “career” – she played the role of a horsy lady who wrote a bit when, in fact, it was the money she earned from her books which kept her household afloat. Her determination in sometimes grim circumstances to paint the world in sunshine showed the same kind of nonchalant heroism as her “startling achievements” during the war.

Telling Tales: The Fabulous Lives of Anita Leslie by Penny Perrick is published by Lilliput Press, at €20