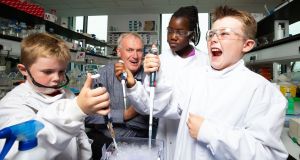 To interview him I conscript the help of my nephews Cillian (10) and Senan Cummins (8) and their friend Elisa Mac Gabhann (11). When we arrive at TCD’s biochemistry building, Prof O’Neill tells us about the 800 scientists working in the building and his own work in immunology.

“The immune system is like the defence system,” says Senan, who has done his research. They’ve read the book thoroughly and taken notes.

“The trouble is the immune system goes wrong sometimes and that makes people sore,” says O’Neill. “So people with arthritis might be sore.”

“Like this!” says Senan and he cracks his wrists.

“Do you know what that crack is?” asks the professor.

Up in the immunology lab O’Neill tests the knowledge of his youthful lab partners. “Why is blood red?” he asks.

They don’t know. He explains. “Iron goes red when it rusts. Rust is called iron oxide and it’s quite similar. The reason why blood is red is because it carries oxygen. Why is the grass green?”

“The grass is green because the sun is yellow and the sky is blue and that makes green,” chips in Etain, Senan and Cillian’s sister. Etain is here in an unofficial capacity and has not read the book.

O’Neill laughs. “Another metal called magnesium makes grass green. [It’s in] chlorophyll, which is good at absorbing the sunlight and it uses energy in sunlight to make more of itself.”

He has another question. “Why is your poo brown?”

“Why is your poo brown?” repeats O’Neill.

“The red blood cells that are in your blood eventually get broken down and turn brown,” says O’Neill. “So it’s mainly coming from red blood cells and you make stuff in your bile to help you digest food and that’s a kind of brown.”

“Oh my God,” says Elisa, saying what we’re all thinking.

“Because it’s a reflection of the sea?” suggests Elisa.

“The nearest star to Earth, do you know what it is?” asks O’Neill.

“Yeah, people often get this wrong at quizzes,” says O’Neill. “After the sun, the nearest star is Alpha Centauri.”

“What is the sun made of?” asks O’Neill.

“About a gazillion years ago the sun was formed from a big giant puff of gas,” says Senan.

“What is the gas the sun is made of?” asks the professor, before offering a clue: “There was a Greek god called Helios.”

“And the second one is hydrogen and what’s happening is those atoms are bouncing off each other and that creates a huge amount of heat.”

At this point they’re all wearing oversized lab coats and goggles and mucking around with dry ice. “Is it possible to freeze your body while you’re still alive and then come out a few years later and not have aged?” asks Elisa.

“That’s called cryonics,” says O’Neill. “We’re studying cryonics because if you die we could freeze you and if they found a cure a hundred years later we could unfreeze you and give you the cure.”

“The legend is he froze his head,” says O’Neill.

We go to a nearby balcony to do some experiments, but someone spots a vending machine and soon I’m buying everyone sweets because I am an irresponsible and weak uncle. The first experiment will be to extract DNA from spit.

“Who has the most spit?” O’Neill asks. There’s a short discussion about this. Elisa gets to spit into the glass.

“So there’s cells in your spit and there’s DNA in those cells and the salt is going to burst open those cells. A squirt of soap. And now squeeze some of this pineapple in.”

He explains that pineapples have enzymes that are useful for breaking down protein and that the ethanol is going to make the DNA come out of the solution.

He picks out the stringy DNA. “The recipe for life,” he says. “We could make a clone of Elisa.”

Elisa eyes him suspiciously, “What are you planning to do with my DNA?”

For his next experiment, the professor puts a stone representing Ireland into a pool of cold blue water, representing the ocean, into which he pours warmer dyed red water to represent the weather-modifying Gulf Stream. Sadly, this experiment is hindered by our junior scientists’ desire to “make purple”.

O’Neill can’t locate the sheet of paper for the fourth experiment. This is because Senan is drawing on it, so I give the professor a printout of his own book and he creates a volcano with baking soda, vinegar and red dye.

“Why is the Earth round but the ground is just flat?” asks Senan.

“It just seems to be flat but it’s so huge we don’t realise it’s actually curved,” says O’Neill. “If you went super, super fast you would notice, it would start curving.”

“Is there life on other planets?” asks Elisa.

“They reckon there’s something like 40 billion planets like the Earth going around stars so there must be life on some of them,” says the professor.

“In five billion years we’re going to crash into another galaxy,” says Senan. This isn’t a question, more a stoically existential statement.

“Yes, the Milky Way is going to crash into another galaxy in about five billion years,” says O’Neill. “That’ll be noisy won’t it?”

“No it won’t,” says Elisa. “Because you can’t hear sound in space!”

The professor is impressed. “That’s right! Sound can’t travel through a vacuum.”

“Is it true that seven years on Earth is like two years in space?” asks Elisa.

“Einstein had this theory,” says O’Neill, “that as you move, time slows down. If you had two identical twins, put one on a space ship and one back on Earth [and] the guy in space will be slightly younger when he meets his brother back on Earth.”

“There’s a superhero called Quicksilver and he’s very fast and when he runs, time slows down,” says Senan.

“Why did you become a scientist?” asks Elisa.

“In school I had a biology teacher, Mr Mooney, and he told me about this magical molecule called DNA,” says O’Neill. “I wanted to find out more about that so I went to university and I did science... Science is just about being curious.”

Elisa says she wants to be an archaeologist. “Archaeologists use science all the time,” says O’Neill. “They use DNA. And they use carbon dating to date how old things are.”

“You know the moon?” asks Senan. “If the moon was any closer it would suck up all the water on Earth.”

“When the moon comes in all the tides go in,” says Cillian.

“And no one believed that at first,” says O’Neill. “Science is all about having a good idea and then proving it.”

“All the good science starts off as an idiotic dream,” says Cillian, wistfully. Then he asks: “What do you do at work every day?”

Recently, says O’Neill, he and his colleagues have discovered that glucose is burned in a different way in cells when they are having an immune reaction. This, they hope, will lead to new ways of treating inflammatory diseases.

“What if there was a robot that could mimic a human or an animal?” asks Elisa.

“Get this,” says O’Neill. “We’re now growing bits of human in the lab and that’s better than testing on animals.”

“How many books have you written?” asks Senan.

“This is the second book I’ve written. I’ve written another one for adults)” (Humanology).

“Charles Darwin, ” he says. “He explained life on Earth through evolution. He’s Elvis Presley for biologists.” He also made sure to include lots of female scientists in his book, he says.

“Yes! Only four people have won two Nobel prizes and she’s one of them. She’s very famous for [discovering] radioactivity.”

“A third of the Arctic is frozen penguin wee,” says Senan, who learned this fact from O’Neill’s book.

“And shrimps’ hearts are in their head,” says Cillian, matching him with another fact. “I just realised, if a shrimp’s heart is in its head where would his brain be?