A Game of Consequences review: a tame Tiger tale

The writer, a former banker, has a sharp ear for dialogue that chronicles deception 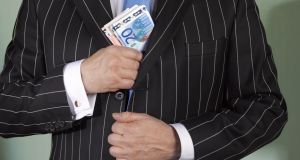 The publisher may pitch this as a conflict of loyalty and conscience, but there is no bite because there is no character development in this ethical wasteland

Book Title:
A Game of Consequences

It’s five years before the Celtic Tiger’s implosion when Des Peters, plodding accountant in a Dublin bank, is pipped to the CEO post by Milo “Tiger” O’Toole, a marketing man with a strategic plan that is “long on aspirations” with “feck all detail”. But Milo knows nothing about banking so he needs a patsy to effect a “quantum leap in the bank’s risk profile”. Thus Des finds himself the surprise COO, bedazzled by a six-figure compensation package plus share options.

There are snapshots treats of Tiger excess and the writer, a former senior investment banker, has a sharp ear for dialogue exchanges that chronicle the mechanics of deception and rule bending in management committee discussions – and in Des’s tedious mansplaining to his wife.

Des is perfectly positioned to understand where the game of consequences can lead but he is compliant and facilitative because he is weak and greedy and the intrusive first-person conscience pricks did not convince. As the wheels threaten to come off Milo’s new offshore venture, Des wonders if he should do the right thing and takes counsel from his 80-year-old school priest who urges him to remember Polonius and “to thine own be true”.

The publisher may pitch this as a conflict of loyalty and conscience, but there is no bite because there is no character development in this ethical wasteland where spineless self-interest finds an exit and saves its ass.

Ten years after the financial crisis we are reminded yet again of the toxic culture of cowardice, cronyism and greed that brought Ireland to its knees and the players who, for the most part, went unpunished.

As we fade out to soft focus in Howth, the reader is left with the queasy feeling that nothing much has changed since Alexander Pope’s response to the South Sea Bubble where “corruption, like a general flood /Shall deluge all; and avarice, creeping on, /Spread, like a low-born mist, and blot the sun.”
Aifric Campbell’s novel On the Floor was long listed for the Orange Prize 2012. Previous novels include The Loss Adjustor (2010) and The Semantics of Murder (2008). She is a former managing director of Morgan Stanley