Body and Soul: A one of a kind festival with a heart of gold (and green) 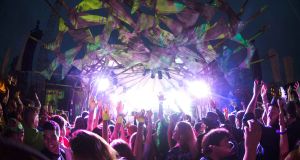 What began as a constituent part of Electric Picnic is now a standalone music/culture event in its own right. Ten years on, Body & Soul remains one of a kind – a music festival that isn’t just that but rather more of a multimedia experience with a heart of gold (and green).

This year’s 10th anniversary music line-up is, perhaps, typical of the festival’s mindset in this area. Because of capacity (10,000) as much as demographic, the music is pitched at the discerning, knowledgeable fan, a person that ventures out more to smaller venues and shows than the overly commercial fare that 3Arena, Aviva and/or Croke Park present.

When we say that homegrown music is experiencing a luxurious, stretched-out moment, we mean that

We’re not saying there’s a typical Body & Soul participant, but we’ll hazard a guess they’re more into Kate Tempest than Nathan Carter. While the likes of Tempest, Modeselektor, Kruder & Dorfmeister, Princess Nokia, The Blaze, and iAMDDB (aka I am Diana De Brito) fill in the blanks for late-night clubbers and lovers of every kind of R&B/trap/urban jazz/hip-hop/electronic/pop fusion music, there is no way you should bypass the wealth of Irish acts that will be appearing across the weekend.

When we say that homegrown music is experiencing a luxurious, stretched-out moment, we mean that. You only have to casually glance through the selection of acts to know that you could catch an all-Irish line-up over the weekend and you’d still walk away knowing your time and money had been well spent.

And yet, as previously remarked upon, Body & Soul isn’t merely a one-stop-shop music festival for the beats generation. Over the past ten years, the programmers have been fully aware that culture comes in many forms, and as the festival has progressed those different strands have been fashioned, theremin-like, into an adaptable entity that is as much a reason to go as any other.

Under the title of The Library of Progress, there is spoken word (Beats versus Rhymes, which sees Emmet Kirwan present/host an array of poets, including Natalya O’Flaherty, Stephen James Smith, Roxanna Nic Liam, Trudie Gorman), and podcasts (Taranoia, hosted by Tara Flynn; Sentimental Garbage, hosted by Caroline O’Donoghue).

Capping off the weekend is a career/life spanning interview, conducted by Hugh Linehan, with activist Ailbhe Smyth

The Irish Times gets its on-the-record festival vibe on via panel events and podcasts. The former includes The Breakfast Club (a discussion on climate change with the paper’s food and drink writers, Jess Murphy and Sorcha Hamilton, and cookbook author, Roz Purcell; hosted by Irish Times restaurant critic, Catherine Cleary).

Capping off the weekend is a career/life spanning interview, conducted by Hugh Linehan, with activist Ailbhe Smyth, one of Time Magazine’s 100 Most Influential people.

Is that it? You must be joking, dude. Food, wellbeing, family fun and games, talks, workshops and a sustainability strategy are in the mix, also. And, you know, perhaps a martini or two.