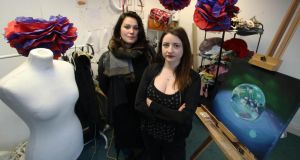 This week Block T, which describes itself as a “one-stop shop for all things creative”, announced that its 120 members would be vacating its premises in Dublin. It currently houses more than 70 creative studios and workshop facilities. Block T has been at the vanguard of a grassroots regeneration of Smithfield, after initial boom-time redevelopment resulted in a soulless apartment- heavy neighbourhood.

The organisation said: “Delivering hundreds of cultural events, from art exhibitions to festivals to Christmas markets to educational programmes, Block T’s network produced millions for the Irish creative industry, as well as establishing jobs in the cultural sector for both its team and members.

On Facebook it added: “Our current model, in which we are providing subsidies and programming for creative workspace, is no longer viable in the growing market, therefore we are revisiting our strategy, facilities and offering.”

It’s hard not to see this creative hub’s departure from Smithfield as part of a wider shutdown of cultural spaces in the capital. Several have gone, including the Joinery, Moxie and Mabos, all closed in 2014.

It was hard enough for creative and cultural spaces to exist in a recession, when low rents and vacant buildings facilitated their existence. Now, as the commercial property market starts to gobble up the city again, they are going to have to adapt.

Despite their precarious position, Block T’s founders, Laura Dovn and Grace McEvoy, radiate enthusiasm about being part of that change. They don’t want to be seen as victims or just another story about Dublin not supporting its artists: they want to call on stakeholders to start talking about how entities such as Block T, which they see as essential to the creative vibrancy of the capital, can be supported.

Dovn points to London, where public funding was made available to help spaces such as this move on to the next phase. Successful applicants for the London Regeneration Fund were announced this week. The new fund is allocating £20 million (€26 million) to tackle the shortage of creative workspace. Projects funded so far include a gallery refurbishing an old fire station in Peckham, a vacant building in Hackney being converted into artist studios, and industrial sheds and the ground floor of a car park being turned into workshops.

Dave Smith, who founded and ran Mabos, one of the spaces that closed in 2014 – it was a creative and cultural centre on Grand Canal Dock – was one of the many people who used Block T as a workspace. He is now refurbishing a shared workspace at the back of a pool hall on South William Street, which runs parallel to Grafton Street.

Mabos was one of the most vibrant spots in the city until the commercial property market turned. That warehouse and its adjacent buildings were refurbished and sold last year through Savills for more than €30 million. The main tenant is Airbnb, which is thought to pay rent of €1,475,000 a year.

“When you value a development in terms of one single factor, which is maximising profitability on a square foot, if that’s the only way you look at development, there’s always going to be this imbalance,” says Smith. He sees one solution as “widening the criteria of what actually constitutes development. This is where the council can come in: they okay developments, they sign off on planning.”

The question he raises is one that nobody seems to be able to answer: who is accountable for sustaining these entities?

Ray Yeates, Dublin City arts officer, says the council doesn’t control many spaces. He also questions the lobbying prowess of artists and creatives. “As usual, the arts community is not a unified lobby. It’s got to really work harder, and work with statutory agencies strategically, to make an impact in the way that farmers or start-ups do.”

Ciara Scanlan is a founder and director of the artist-led organisation Mart, along with Matthew Nevin. They have seven buildings in Dublin, having started out with renovating a fire station in Rathmines.

For Scanlan there is one big issue that needs to be addressed. “It’s policy, a provision within the development plan of the city to properly nurture and support culture in any major development that happens, and to value it. The council ask us how we’re bringing revenue into the area. But Rathmines has totally changed since we started out there. You can’t quantify those numbers, or a ‘vibe’, so there needs to be research into how culture actually does bring revenue into an area.”

Dovn thinks back to six years ago, when Block T came into existence. “Everything was so depressing, everyone was giving up, everything was so grey. We were fresh out of college, and, seeing this area being regenerated, we saw that people were aching for change. We were full of ideas and energy.”

Artists operate with few resources, they say, and individuals have to do what might be the work of multiple people elsewhere. To add lobbying on top of that is a big ask, but, says McEvoy, “it’s a challenge we have to rise up to”.